★☆☆☆☆ From Overboard (Rob Greenberg, 2018) to What Men Want (Adam Shankman, 2019) and everything else in between, it’s safe to say that gender switch comedy remakes have so far failed to come up with the goods in the laughter department. The latest gender flip comedy, if you can call a film with zero funny […] 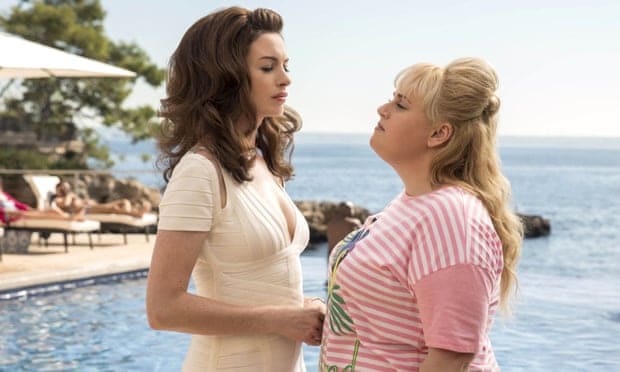 From Overboard (Rob Greenberg, 2018) to What Men Want (Adam Shankman, 2019) and everything else in between, it’s safe to say that gender switch comedy remakes have so far failed to come up with the goods in the laughter department.

The latest gender flip comedy, if you can call a film with zero funny gags a comedy, is a riff on the deeply unfunny 1988 film Dirty Rotten Scoundrels and stars Anne Hathaway and Rebel Wilson as two rival con women trying to outdo each other on the French Riviera. So far so intriguing one would think, but no. In fact nothing about this film can be considered funny enough to warrant anyone’s attention for more than ten minutes.

Directed by Chris Addison, he of The Thick Of It fame, The Hustle falls at the very first hurdle by offering one of the flimsiest and most preposterous plots you’re likely to come across this year. But this isn’t all Addison’s fault, although it has to be said, his directing is just not up to scratch here.

We first meet Penny (Wilson) who, after escaping from the law when her  highly lucrative catfishing scam is discovered, sets her sight on Europe where she travels cheaply by train and cons unsuspecting men for the cost of her next meal. Travelling on the same train happens to be none other than the regal Josephine Chesterfield (Hathaway), a far more successful scam artist who appears to have made her job into a far more successful career than Penny’s. Faced with the prospect of being outed by her shambolic rival, Josephine reluctantly agrees to teach her how to become a better scammer.

Rebel Wilson does her usual shambolic physical comedy schtick, which surely by now is starting to grind on almost everyone. However it is Hathaway who brings the whole thing crashing down with one of the of the worst performances we’ve seen from the Oscar winner. Her delivery is not only wooden, it is also laughably cringeworthy.

Addison, as a great a comedian as he is, simply fails to deliver the goods here. Which is a real shame considering that this was his debut feature. Furthermore, it is hard to think what has been added to the original, apart from the ability of making it look far better than it actually is. A woefully awful mess which deserves to be forgotten and to never be mentioned ever again.

The Hustle is on general release nationwide.