★★★☆☆ Charlotte Field (Charlize Theron) is the youngest US Secretary of State in history and is preparing for a Presidential run, while her numbers are positive, she needs to up her humour score and so she’s looking for a joke writer to pump up her speeches. Fred Flarsky (Seth Rogen) has just quit his job […] 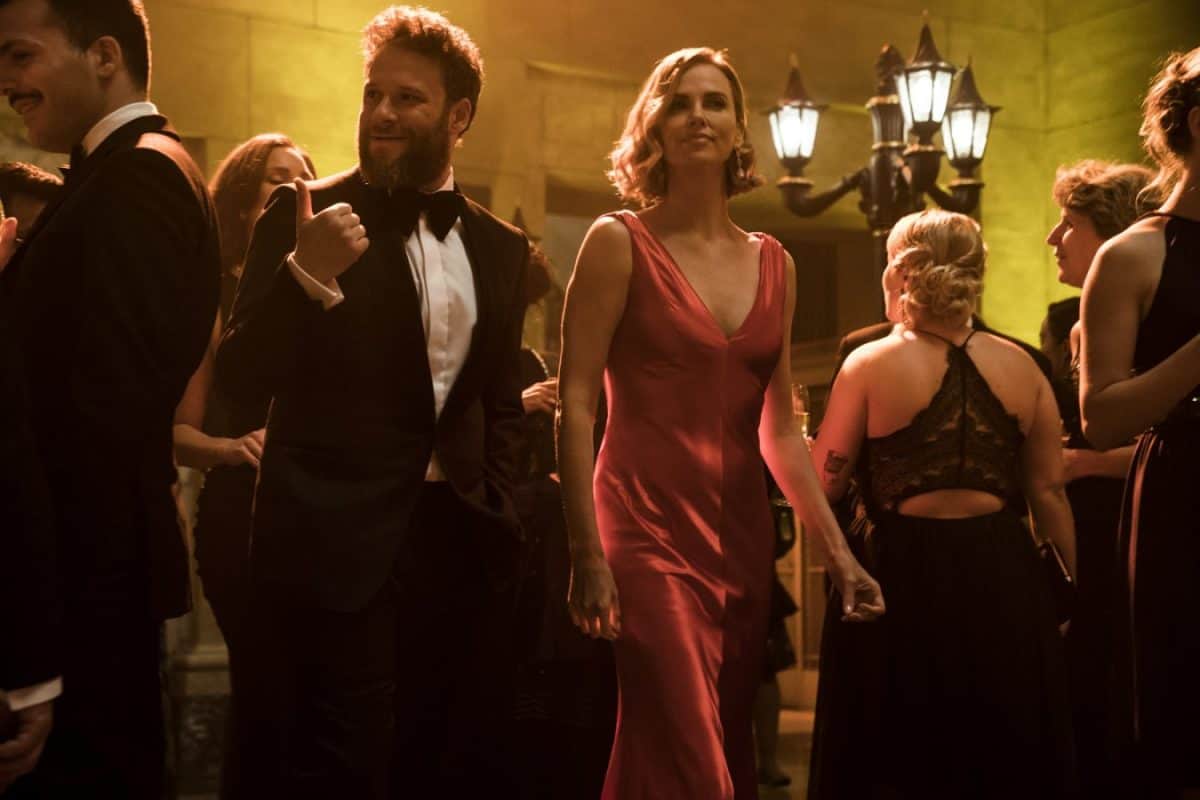 Charlotte Field (Charlize Theron) is the youngest US Secretary of State in history and is preparing for a Presidential run, while her numbers are positive, she needs to up her humour score and so she’s looking for a joke writer to pump up her speeches. Fred Flarsky (Seth Rogen) has just quit his job after his left-wing online news site allow themselves to be bought out by a media conglomerate owned by Parker Wembley (an unrecognisable Andy Serkis). The two run into each other at a party and Charlotte remembers Fred, who she used to babysit, he’s soon hired as her new writer and the two begin to connect.

The romantic comedy is a tricky thing, very easy to get wrong. Chemistry is the great unknown of the genre and if it doesn’t work – at either a comedic or a romantic level – then the film is on to a loser before it even begins. At face value, Charlize Theron and Seth Rogen (she incredibly beautiful, and more an action star lately, he the schlubbiest of Hollywood’s comedy leading men) are an odd fit, but they get Long Shot over its two major hurdles comfortably. Theron shows unexpected comedy chops, committing totally to the jokes and demonstrating a sharp comic timing that fits her incisive character and bounces perfectly off Rogen’s more chilled, but equally funny, vibe. Just as importantly, odd couple though they may look, the romantic chemistry works. It’s easy to buy into Fred’s disbelief and excitement at being able to have a relationship with Charlotte, but equally easy to see what Fred gives her; a genuine connection, unencumbered by the fakeness of politics (personified at a romantic level by the Canadian Prime Minister (Alexander Skarsgård).

At the most basic level, Long Shot works because the jokes hit, whether they be throwaway gags like the acidic put-downs thrown out by June Diane Raphael as Charlotte’s chief of staff or extended set pieces like the hilarious sequence when Charlotte has to solve an international crisis while on MDMA, in which Theron’s timing is particularly delicious. The dynamic is fairly fresh, which means that the script has plenty to work with, even as it works through the typical rom-com playbook.

While the casting is spot on, and Theron is convincing both in conveying the substance of Charlotte as a politician and why an image obsessed President (Bob Odenkirk as a TV actor who used to play the President and now holds the job) would choose her as Secretary of State, the politics is where the film falls down. The President is clearly an attempt to be one degree more ridiculous than Trump (as if that’s possible), but while Charlotte is clearly supposed to be running as a Democrat, we never get much detail on what her President’s policies are (nor hers, beyond an environmental package less ambitious than the real Green New Deal). It would be interesting to know these things because then we would have more of a handle on the true extent to which Charlotte has compromised her principles for this chance at power.

What Long Shot is aiming for is clearly something along the lines of Rob Reiner’s consistently underrated The American President via There’s Something About Mary. It’s disappointing that the more satirical aspect misses the target, given that the broader comedy hits the mark with such reliable frequency.