If you ever want to get a taste of the vibrant multiculturalism in London, take a stroll down the backstreets of Covent Garden. Along New Row approaching St Martin’s Lane there is a French Asian bakery, Thai and Jamaican restaurants and then Italian and Egyptian street food alongside Greek and Indian eateries within a stone’s […] 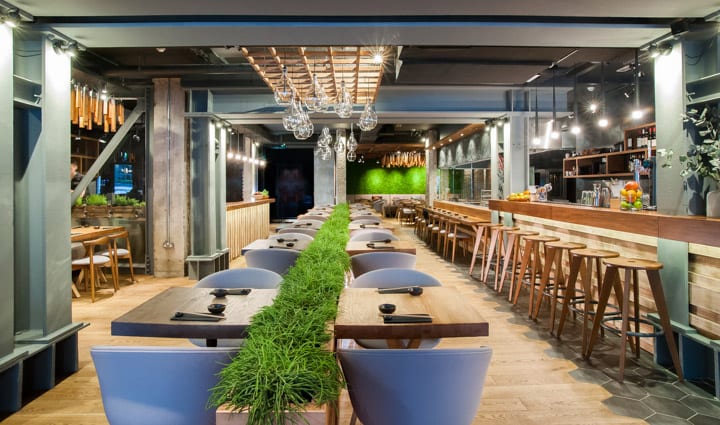 If you ever want to get a taste of the vibrant multiculturalism in London, take a stroll down the backstreets of Covent Garden. Along New Row approaching St Martin’s Lane there is a French Asian bakery, Thai and Jamaican restaurants and then Italian and Egyptian street food alongside Greek and Indian eateries within a stone’s throw of each other. The West End is a microcosm of the cultural hot pot that is London, which makes it a food-lover’s dream.

Murakami fits right in amongst a collection of dynamic dining choices that litter Covent Garden’s theatre district, offering Japanese Izakaya-style cuisine in a fresh and relaxing setting. Chefs slice, dice and press away in the open kitchen that stretches along the narrow room, providing typical bar space dining alongside a smattering of tables.

A wide selection of starters and salads showcase the ‘refreshingly satisfied’ type of food for which Japan is renowned. Yellow tail carpaccio with chilli yuzu soy, garlic chips and chives was recommend along with the new style sashimi which typified the innovative menu. Dishes like that, along with the experimental sushi which is pressed rather than rolled, gave an early indication of how Murakami cuts through the noise not only in a crowded locality, but in everyday Japanese cuisine. The main course offers up a smorgasbord of diverse options. Salmon Oshi Sushi – a flame, seared, pressed roll with Murakami source, red pepper and jalapeno – is a real taste explosion and flying fish roles and rib eye with sweet soya only builds on the experience. But the star amongst an incredibly competitive field is the house-favourite Volcano wrap. Deep fried in tempura with salmon, tuna, yellowtail, tobiko, avocado and spring onion it is a meal in a mouthful giving you a John Torode-esque cheek bulge as you try to devour all the different elements, all of which are perfectly balanced with a La Cote Flamenc Picpoul de Pinet. Desert isn’t something that usually springs to mind in a Japanese restaurant, but it’s worth sticking around for here. Mochi, a Japanese rice cake made of a short-grain rice, is served in sesame seed, green tea, lemon, mango and coconut flavours, perfectly complemented by two of the best after dinner cocktails I have ever had. Lost in Translation is a zesty rum-based cocktail served in a traditional tiki mug, but it was the Japanese-style Espresso Martini that stole the night for me, a Great King Street smokey scotch mixed with kahlua, espresso and green tea syrup. Overall I left satisfied, feeling as though I had experienced a cuisine, rather than a British imitation of it. The food is vibrant, fresh and innovative offering something a little different from the host of high-street Japanese restaurants available. My only criticism is the signage on the toilet doors, because I’m fed up of being misled by deceptive signs and peeing in the wrong sex toilets. But I managed to escape without too many blushes this time, so all’s well that ends well.