Review by Ben Holliday/@bholliday Bad Neighbours 2 follows a trend of sequels that weren’t asked for nor needed but thankfully, that is where the similarities with poor 2016 comedy sequels end. The Nicholas Stoller helmed sequel is full of laughs and most surprisingly of attempts to tackle societal issues. With life having surged on since […] 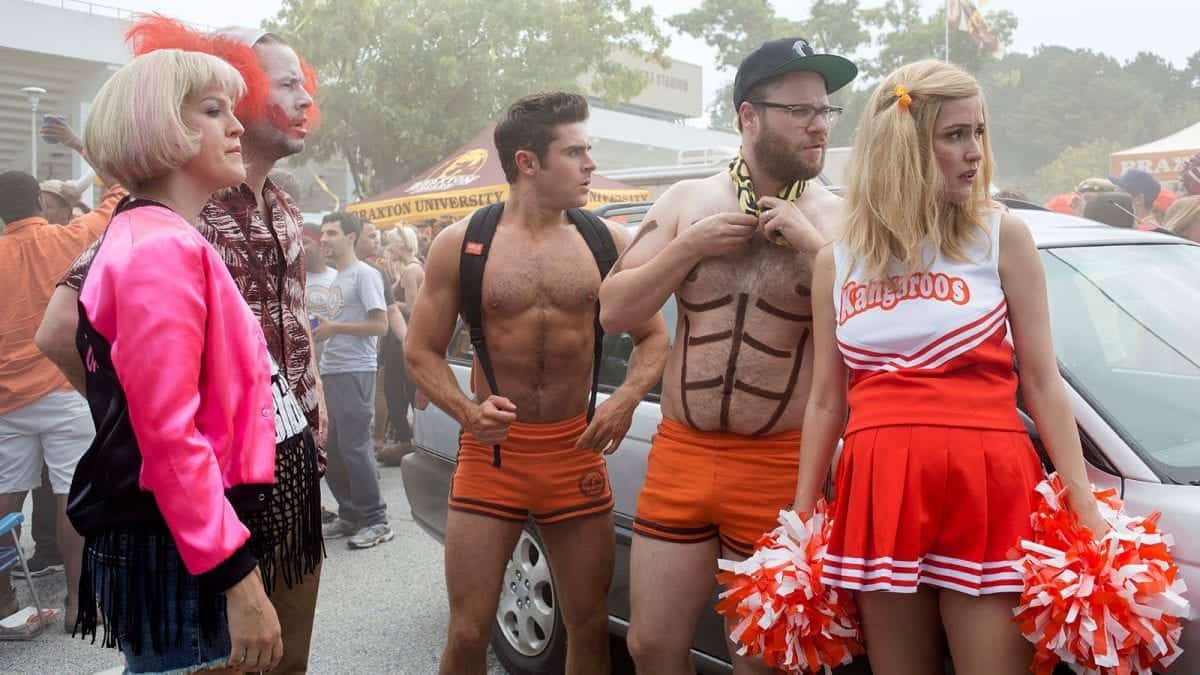 Bad Neighbours 2 follows a trend of sequels that weren’t asked for nor needed but thankfully, that is where the similarities with poor 2016 comedy sequels end. The Nicholas Stoller helmed sequel is full of laughs and most surprisingly of attempts to tackle societal issues.

With life having surged on since the events of the first film, Mac Radner (Seth Rogen) and wife Kelly (Rose Byrne) are preparing to sell their house and move on to larger pastures after they learn a second child is on the way. However with their home in escrow they need to wait a month before the deal goes through; at any point, their perspective buyers can turn up at the house without notice and make sure everything is copacetic.

This wouldn’t be a problem if it weren’t for the town’s newest sorority ‘Kappa Nu’ led by Shelby (Chloe Moretz), moving in next-door, in the house once owned by Teddy Sanders (Zac Efron) and his crew of jocks. With the couple at breaking point and desperate to move on with their lives they turn to their one-time enemy Teddy, to turn the tides of frat-warfare.

You would be totally forgiven for assuming that this is a rehash of the original film. The trailers effectively sold this idea to us but with the added twist of ‘the enemy of my enemy is my friend’. You would be ever so slightly mistaken.

Whilst the beats are the same, this sequel throws up a few surprises least of which are its takes on gay marriage and female empowerment. Stoller could have lingered on the fact that one of the ex-fraternity members had since come out as gay, instead, it is seen by Efron and his cohorts as just another part of growing up. There are next to no jokes made at the expense of gay marriage; refreshing considering the tendencies of frat-boy comedy.

The film attempts to tackle female empowerment or rather the lack of in the male-dominated college scene. This sorority looks on in horror at young men’s treatment of women at parties and forms solely to embrace the strengths of young womanhood. These themes extend through to the adults of the film with Rose Byrne commenting that certain plans won’t work on the sorority-like they did on the prior movies fraternity because “Women aren’t as stupid.” In all honesty, the first 20 minutes of this film are not at all what you’d expect focusing on three college freshmen that just want to be seen as their male counterparts equals.

Sure, this isn’t the second coming of feminism in Hollywood productions; the ideas in the film at times feel particularly flimsy especially when the sorority drools over Zac Efron’s naked torso but it is refreshing to see your standard summer comedy attempt to address these ideas.

First and foremost though this is a comedy with laughs that mostly hit the mark. Zac Efron is in fine form here threatening to steal the limelight from other more experienced comedic actors. Teddy Sanders is childlike with his lack of self-awareness and refusal to move on. The best laughs of the film come from his Efron and I’d happily watch a spin-off featuring Teddy and his new career (Oh I won’t spoil that here). In fact, the film is at its best when the youngsters are on screen. Chloe Moretz is great as Shelby and by the end credits is more protagonist than villain. In fact for the majority of the film, you are rooting for this strong and intelligent young woman who just wants to create a home for like-minded individuals, sick of objectification.

Seth Rogen and Rose Byrne are solid again in their role as the Radners but are relegated to side characters this time around and Byrne, in particular, is given less to do with her exceptional comedic talents.

The film is overly long and some of the ‘old people’ jokes begin to wear especially thin after a while. Whilst its intentions are pure, it does occasionally lose sight and contradict the message it is trying to espouse but if you found the first film to be brainless fun, you’ll certainly enjoy this follow-up.