By Wyndham Hacket Pain  Maud Lewis remains one of Canada’s best known folk artists. Despite suffering from rheumatoid arthritis that restricted her movement she still managed to produce her much loved paintings. At one point her fame grew to the extent that she was featured in magazines and on television, and even sold a painting to […] 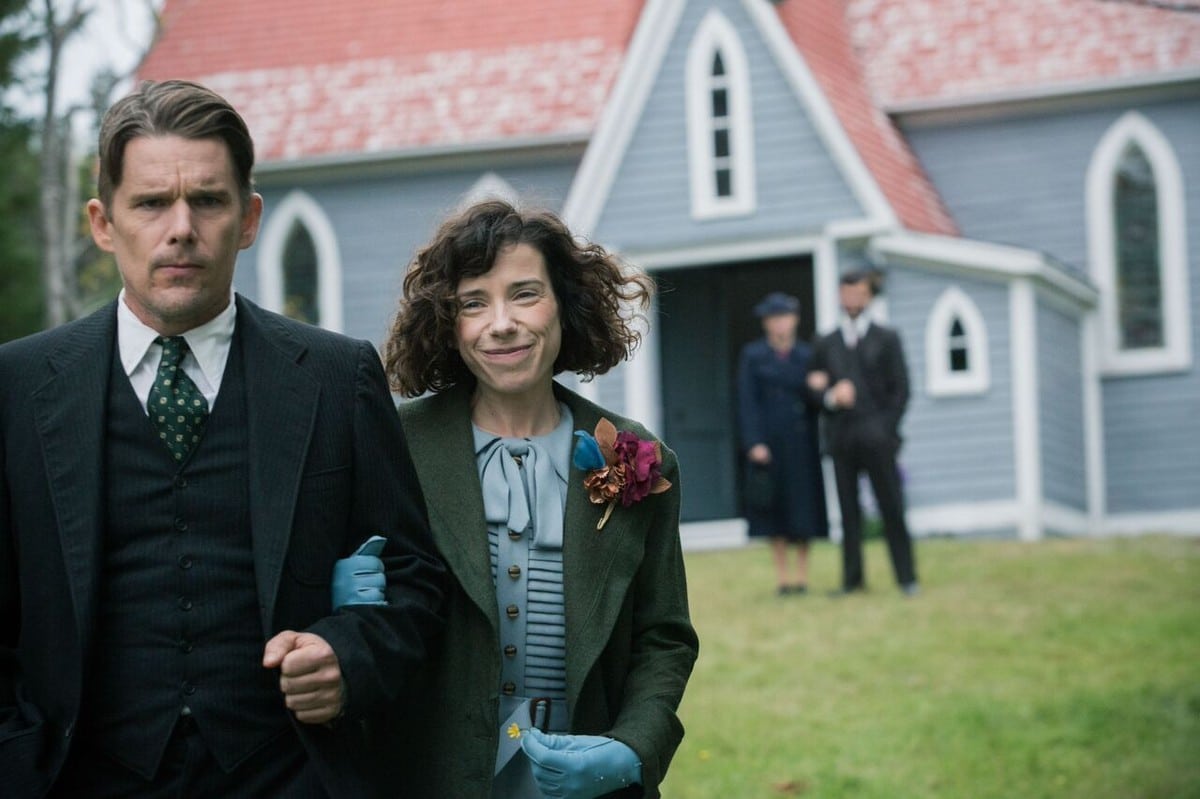 Maud Lewis remains one of Canada’s best known folk artists. Despite suffering from rheumatoid arthritis that restricted her movement she still managed to produce her much loved paintings. At one point her fame grew to the extent that she was featured in magazines and on television, and even sold a painting to the then Vice-President Richard Nixon.

Maudie opens in provincial Nova Scotia during the 1930s, where Maud Dowley (Sally Hawkins) is frustrated at the lack of independence allowed to her by her Aunt Ida (Gabrielle Rose) due to her disability. Seeking freedom she takes a job as a cleaner for local fish peddler Everett Lewis (Ethan Hawke) and moves into his two room house. Before long a bond between them forms and Maud is even able to persuade Everett to marry her. All the while Maud’s paintings are receiving increased attention, as she continues to look through the window in house and paint what she sees.

Sally Hawkins in all likeness will gain attention and even awards recognition for her depiction of Maud Lewis. As ever she is very likable and warm but her performance does not have the technical brilliance of Daniel Day-Lewis in My Left Foot. I am not a doctor but there did seem to be inconsistencies with Maud’s disability. As a result it always feels as if you are watching Sally Hawkins and not Maud Lewis.

The same can be said of Ethan Hawke’s performance where he struggles to be convincing in his portrayal of Maud’s brutish husband. Hawke as an actor can be charming and charismatic but there is always a softness that accompanies it. Everett may threaten Maud and even on occasion revert to violence but it always feels like a performance and not part of his character.

Comparisons have been made to My Left Foot and Seraphine but unfortunately Maudie doesn’t compare favourably to either film. Where My Left Foot was at its core a character study of its central figure, Maudie is instead a love story about a mismatched couple who somehow manage to find happiness together. This story can be entertaining but fails to utilise the potentially fascinating source material with a story that is very thin on events and details.

I am not someone who thinks that films need to be driven by plot, but the problem with Maudie is that this vacuum is not filled by character or thematic development. The title may refer to its lead character, but leaving the cinema I wasn’t left feeling that I knew her or her struggles. Beyond her painting and her arthritis there is very little insight given about her life. It is hard to know what her motivations were and even why she painted. Much of the film merely exists on a surface level, with little substance or exposition to accompany it.

In the end Maudie is very watchable and is at times entertaining, but its subject matter alone is not enough to elevate it above this. What could have been an intriguing character study is instead an off-beat and at times charming love story.