By Wyndham Hacket Pain  Stories about the Second World War are so ingrained in our minds and daily practice that it can seem as if there is nothing to add to the discourse of this period. As a result, it is always a pleasure for a story to separate itself from the pantheon of films, books, […] 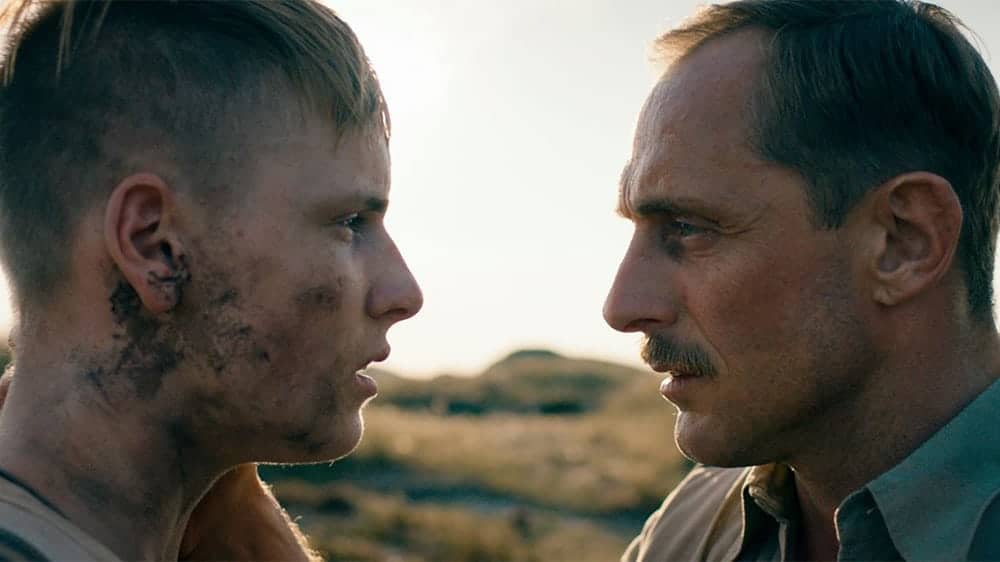 Stories about the Second World War are so ingrained in our minds and daily practice that it can seem as if there is nothing to add to the discourse of this period. As a result, it is always a pleasure for a story to separate itself from the pantheon of films, books, and tales that have tried to cover the period before and perhaps even more exciting when someone tries to challenge the preconceptions we have about the narrative of the war. Land of Mine does just this and highlights events that I’m sure most viewers are not aware of.

Set in Denmark in the days following the end of the Second World War, Land of Mine is about a group of young German prisoners of war that are forced to defuse mines left by the German army on the Danish coast. Overseeing them is the fierce and sometimes brutal Sergeant Carl Leopold Rasmussen (Roland Møller) and the unremorseful Captain Ebbe Jensen (Mikkel Følsgaard). As the young men carry out the task of defusing the bombs, Rasmussen begins to sympathise with those under his command and becomes increasingly conflicted.

In total over two million land mines were defused by German prisoners of war along the Western coast of Denmark. The decision to give this task to young prisoners must have felt intuitively fair even if it is objectively a cruel act of vengeance. It is a kind of logic that is used every day but one that is destructive and responses to inhumanity with more inhumanity.

The conflicts of this mindset are brilliantly inhabited by Sargent Rasmussen, who at one moment will beat the prisoners and another mourn one of their deaths. Roland Møller gives a towering central performance, managing to be both fierce and tender, that would have swept the award shows if the film had been produced in English. It is a truly noteworthy role that is among the best I have seen over the last few years.

Similar confliction is emphasised by the beautiful cinematography that brilliantly juxtaposes the murky and often violent nature of the plot. The coastal landscapes are shot with grainy precision that leaves the viewer feeling as exposed as those defusing mines on the beach. The constant threat of explosion adds another element, with each action lined with suspense and dread.

There are some tonal shifts as the film developments, mainly represented through the bond that grows between Rasmussen and the prisoners. As the sergeant’s sympathy for the young men develops the bombs begin to feel less threating and the prospect of one day returning home becomes a possibility. It can on occasion feel slightly forced, with Rasmussen’s transformation from vicious leader to protector at times too great to be truly believed. In the end a messy and complicated story comes across a bit too compact and neatly presented.

Containing beautiful imagery and a colossal central performance from Roland Møller, Land of Mine turns an intriguing episode in Danish post-War history into a personal and tense drama. Some parts of the plot may seem slightly contrived but overall the story is both emotional and narratively engaging.