Lee Tamahori’s Once Were Warriors, adapted by Riwia Brown from Alan Duff’s novel of the same name was, at the time of its release in 1994, the highest grossing film at the New Zealand box office. A position it held for nearly a decade, until the release of Whale Rider. Centring on the Heke family, […] 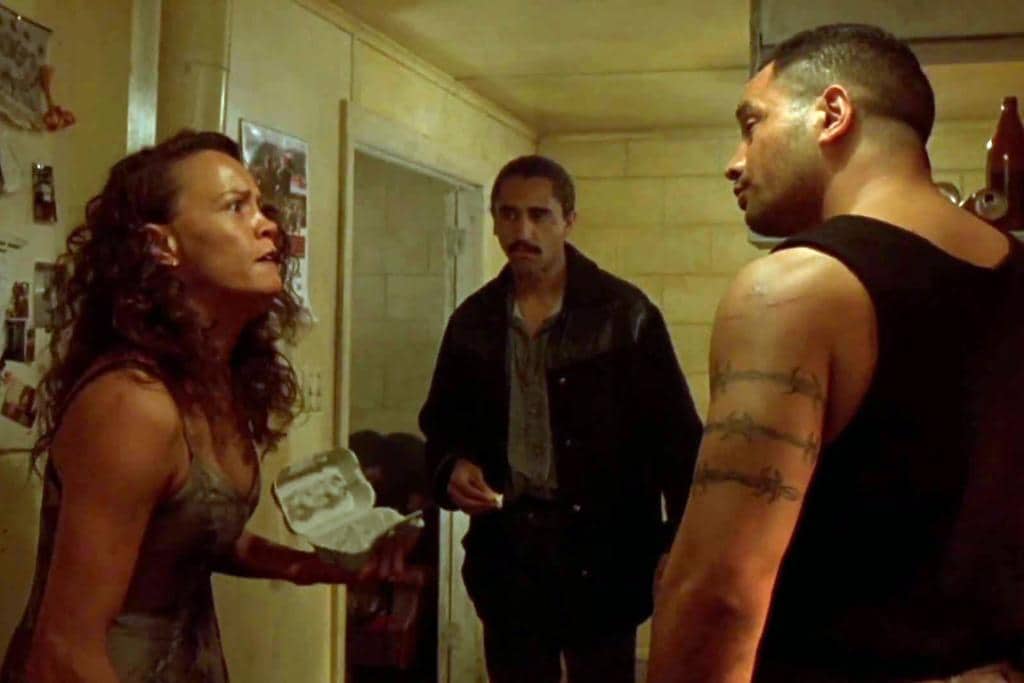 Lee Tamahori’s Once Were Warriors, adapted by Riwia Brown from Alan Duff’s novel of the same name was, at the time of its release in 1994, the highest grossing film at the New Zealand box office. A position it held for nearly a decade, until the release of Whale Rider.

Centring on the Heke family, Tamahori’s film provides an uncompromising insight into the Maori experience of inner city living, alcoholism, and domestic abuse. Jake the Mus (Temuera Morrison), on account of his muscles, comes home from work early one afternoon. He has been given the sack. It’s okay, he explains to Beth (Rena Owen), his strikingly beautiful wife, because on the dole he’ll get nearly as much money as he did at his job. In Jake’s mind this will not interfere with his boozing and gambling, if anything it will make it easier for him to pursue it. But, Beth wants more and dreams of one day leaving their council house and buying a place of their own. The fissures and tumult of their marriage quickly become apparent as does Jake’s short fuse.

The Heke kids are a self-sufficient bunch in the way that only kids from troubled homes can be. Starved of their fathers love and haunted by the long shadow of violence he casts over the home, they grasp desperately for their own sense of security and normalcy. Nig (Julian Arahanga), the eldest, has joined a gang. Boogie (Taungaroa Emile) is in and out of trouble with the law and at risk of being taken into state care. And thirteen year old Grace (Mamaengaroa Kerr-Bell) takes refuge in the stories she writes and the burnt out car homeless friend, Toot (Shannon Williams), lives in.

After a boozy night out which ends up with Jake and mates returning to the house to continue the party, a refusal to cook some eggs sees Beth on the receiving end of Jake. In a shockingly brutal sequence, Jake proceeds to beat Beth to a bloody pulp. The next morning the house is a mess with empty bottles and upended furniture. The walls are splattered in Beth’s blood and the children, who hours before had been cowering in their rooms, are dutifully putting the place back together.

Beth, to bruised and swollen, sends Gracie with Boogie to attend a court hearing. The lack of Beth’s presence does not go unnoticed and the judge remands Boogie, ordering him to a reform school and thus setting the film in motion.

Once Were Warriors is set in a world far removed from the untouched beauty of the Kiwi countryside first glimpsed in the opening shot of the film. Just as Tamahori pans down to reveal the idyllic image is nothing more than a billboard advertisement so too does his film, plunging us into a world of highway fumes, government housing and benefits, where dreams are stunted by the harsh realities of environment or drowned in cheap beer.

This is a social realist film, albeit a stylised one. The issues it addresses are those likely to be found in a Ken Loach or Alan Clarke film, but bathed in soft, golden-yellow hues with strong blacks and reds there is a polished aesthetic that sits over the grit and gives the film a softer (in appearance) edge. This undoubtedly plays in the films favour, making Once Were Warriors more accessible through its presentation and whilst it doesn’t detract from the raw power of the film, for some it may seem to unpack some its weight.

What is so frightening and yet brilliant about Once Were Warriors is the reality of the internal contradictions of its characters. Jake is big and charismatic, he exudes an energy that is lapped up by all when out on the piss. The nights spent in the front room of the Heke house with friends drinking and singing show Jake in the light in which Beth would have first seen him and allowed her to fall in love, marry and have kids with the man. Similarly, you are left questioning why a woman with Beth’s strength, pride, aspirations and sense of heritage has hung around so long. It’s a nuanced and very honest reflection of the complexity of relationships, dependence and the prison of abuse.

Owen’s Beth is a character as restrained as she is explosive. At times, a wallflower who sits with the other women, gossiping, drinking and looking good for the blokes and at other times a roaring Mother, standing tall against a deadbeat husband. But it is Morrison’s Jake who takes the prize. He is a suffocating presence. A powder keg with a temper that simmers beneath a broadly muscular physique. Although at times charming, scenes that include him possess a tension that teeters so delicately on a knifes edge that the displaced air from a word put wrong would be enough to send him into a flying, fist curled rage. And most terrifying is the casualness with which he slips back into normalcy after beating his wife so severely. He is a frightening character, played perfectly.