As opening statements in a film career go, the pre-credits sequence of Menace II Society is a powerful one. Two young black men, Caine (Tyrin Turner) and O-Dog (Larenz Tate) are carefully watched by the Korean husband and wife owners as they buy themselves beers in a convenience store. They’re pissed off by the implication […] 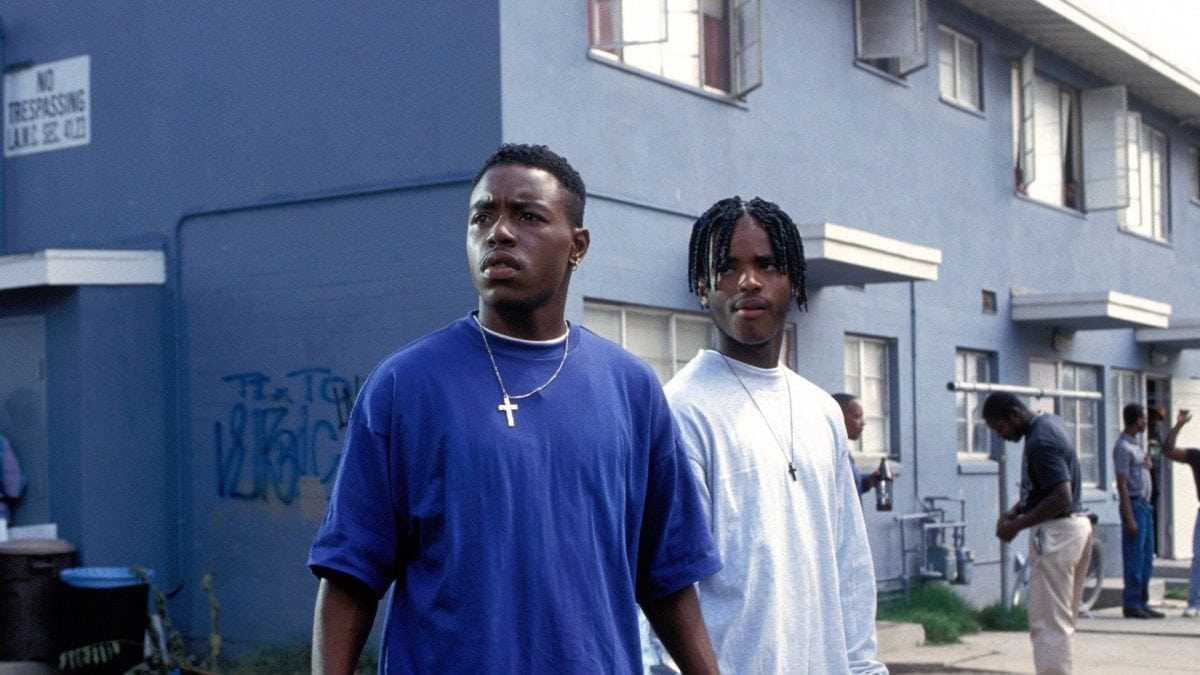 As opening statements in a film career go, the pre-credits sequence of Menace II Society is a powerful one. Two young black men, Caine (Tyrin Turner) and O-Dog (Larenz Tate) are carefully watched by the Korean husband and wife owners as they buy themselves beers in a convenience store. They’re pissed off by the implication that they are planning to steal from these people, but it’s only when the husband says “I feel sorry for your mother” that things turn. O-Dog shoots the man almost immediately, before taking the woman out back, getting the security tape from her, and killing her too. It’s a brutal opening, one that makes clear the way that violence can grow out of one tiny moment, and one that establishes the push and pull that we’ll see Caine go through during the film, between loyalty to his friends and the belief that this way of life is his destined lot and his opportunity to escape the cycle of violence.

Menace II Society came in an early 90s wave of films by young black directors, taking a ground level look at life in the ghetto. Spike Lee led the way, but it was John Singleton’s Boyz N The Hood (which made him the first black filmmaker nominated for the Best Director Oscar) that seemed to set the template for many of these films. Other notables in the cycle include Juice New Jack City and Above The Rim. The Hughes Brothers and screenwriter Tyger Williams, like Singleton, were young guys who were looking to their experiences and the experiences of those around them. You feel that from Menace II Society. The film paints a bleak picture of the African American coming of age experience in the 90s; a sense of a generation trapped because they were raised by another generation who were trapped, and so on down the generations.

Caine, whose mother (Khandi Alexander) was a heroin addict and his father (a striking Samuel L Jackson cameo) a drug dealer spent his childhood taken under the wing of a hustler (Glenn Plummer) and doesn’t see any other options for himself. This fatalistic outlook contrasts with O-Dog, who seems to revel in his status. In one of the film’s most disturbing sub-plots, we see O-Dog repeatedly showing the security camera tape of the murders he committed in the convenience store, beaming with amusement and pride. For me, these sequences recall the infamous (and previously heavily censored) moment in Henry: Portrait of a Serial Killer, when we see Henry and Otis watching one of their own murders back. O-Dog is a different kind of psychopath, but no less dangerous.

As it happens, Menace II Society had its own censorship troubles, though not related to these sequences. It languished for 18 months after its cinema release, awaiting a video certificate from the BBFC. The early 90s were a dark time for UK movie fans, with an overreaction to the supposed influence of Child’s Play 3 in the 1993 murder of James Bulger shaping the discussion around certain films for years, resulting in several delayed or denied certificates. It’s hard to say whether the case played directly into the delay of Menace II Society’s certification, but the climate at the time couldn’t have helped. Surprisingly, when the film did emerge, though it retained cuts imposed for the MPAA’s original R rating, it wasn’t the violence or drug use that was further trimmed, but rather the ‘imitable technique’ seen when Caine and O-Dog steal a car.

The Hughes Brothers give their film a tremendous sense of place. We get the feel of the ghetto as an insular place, rammed home by the one sequence that features a white face, an insurance guy doing a deal with one of Caine’s friends, but also a true sense of community. This comes across especially see the hustlers when they’re off duty: Caine trying to moderate his language while playing video games the young son of Ronnie (Jada Pinkett); O-Dog being polite to his friend’s father (a typically commanding Charles S. Dutton) at a barbeque. These little moments of levity provide a brief break, but neither the characters nor the audience is ever allowed to forget the brutal realities of their world.

A sense of doom pervades the film, even as we see a chink of light for Caine in Ronnie. Ronnie is the girlfriend of Caine’s mentor Pernell, who is now serving life without parole and has asked Caine to look out for her and her son. It’s clear that Ronnie is Caine’s escape route but (as in another gangster film of 1993 that we’ll address towards the end of the year) we fear that he’ll never quite be able to take it, whether through misplaced loyalty or outside influence.

Menace II Society has an undeniable power. The energy of that opening is felt in many sequences throughout the film, notably the flashback to Caine’s childhood, when he first sees his father kill a man, and a revenge attack on a gang who shot Caine and killed his cousin. That power also comes through in many of the performances. The supporting cast is packed with talented players who make the most of brief roles. Glenn Plummer stands out as Pernell; streetwise mentor when he first appears, but a man reduced by prison when we see him at the other end of the film. Another excellent turn is put in by Vonte Sweet as Sharif, who has turned to islam as his way out of the hustling life and is trying to turn his friends to Allah with him. Charles S. Dutton, Samuel L Jackson and Bill Duke, his soft spoken power as riveting as ever, all predictably steal their scenes. The real standout, however, is Larenz Tate, making an outstanding debut as O-Dog. Tate brings an unpredictable livewire energy to all his scenes. Even before he kills the couple in the opening that energy clues us in to the fact that he could do anything in any given moment. O-Dog might be the most corrupt of the people we see here, it’s laid out powerfully in a line of Caine’s narration: “O-Dog was America’s nightmare: young, black and didn’t give a fuck”, yet O-Dog is no monster. In the barbecue scene, in a moment when he sits down with Caine’s grandparents, and in his dedication to his friends, morally twisted as it can be, we can see tiny glimpses of the man he might be if he’d gone a different way, we don’t exactly sympathise with him, but Tate makes O-Dog a figure it’s not easy to hate. 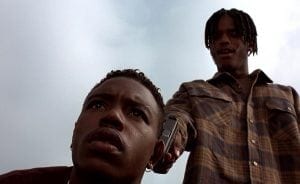 Unfortunately, the one major element that lets down Menace II Society sits right at its centre. Surrounded by talented players, Tyrin Turner is out of sorts as Caine. There’s something rather flat and affectless in Turner’s performance, accentuated by a semi-comatose reading of the film’s often clunking narration which, for every powerful line, has another ten that baldly explain things that the Hughes brothers are talented enough to show us with a silent image. It’s especially notable when O-Dog is off screen, because Larenz Tate seems to lift Turner’s energy and the contrast between that and the flatness of, say, scenes Turner shares with Jada Pinkett (who isn’t bad, but doesn’t have much range to play) only serves to make his shortcomings more obvious. In a few scenes I could perhaps believe that Turner is trying to play a young man weary of where his life has taken him, but the energy is so seldom raised, even when that would make sense, that I feel like I’m hunting for something that isn’t actually in the performance, even if it’s supposed to be.

Menace II Society, as I said, feels like a statement of intent. It’s not fully achieved, but it promises much. Unfortunately, its creators, for whatever reason, never quite found truly sustained success. What Tyger Williams did immediately following Menace, I don’t know. It took him until 2015 to get another screenplay produced, The Perfect Guy looks like one more attempt at the yuppie horror genre, which, perhaps not coincidentally, was at the zenith of its success in the early 90s. Albert and Allen Hughes kept busy for a few years. Dead Presidents disappointed me at the time, but is probably due a rewatch and I remember their Jack The Ripper film From Hell mostly for featuring two hilariously awful accents from Johnny Depp and Heather Graham. Following that, there would be a nine year gap until The Book of Eli, another film I suspect might be more interesting than I thought at the time, came out. They are still working, but separately, For me they’ve never quite delivered on the way that they threw down the gauntlet in Menace II Society’s best passages, but in those moments it’s still an urgent, provocative film that demands attention 25 years on.