When I was very little I wanted to be a paleontologist. By the age of 11 this had changed, because I had become obsessed with movies, but I was still very interested in dinosaurs and would pick up fossils whenever we went to a (British) beach on holiday. I had quite a collection of Ammonites. […] 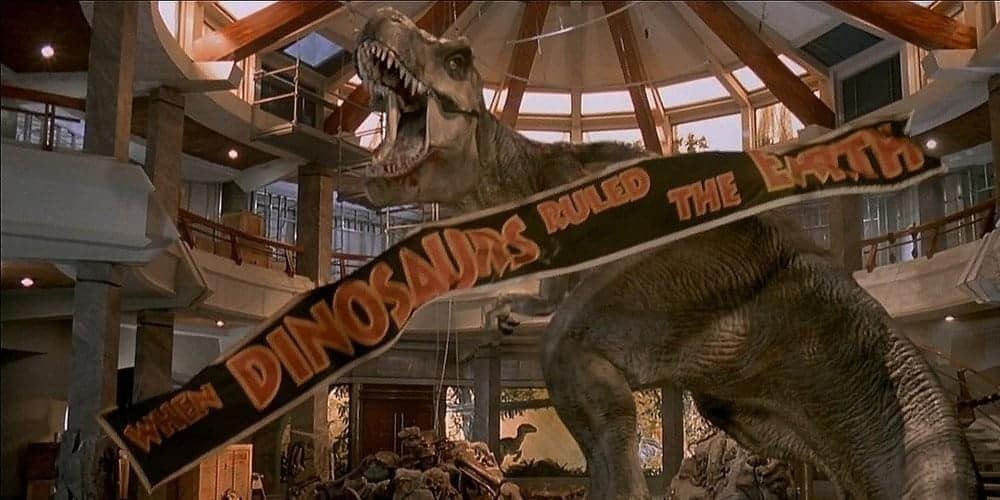 When I was very little I wanted to be a paleontologist. By the age of 11 this had changed, because I had become obsessed with movies, but I was still very interested in dinosaurs and would pick up fossils whenever we went to a (British) beach on holiday. I had quite a collection of Ammonites. This, along with that obsession with movies I mentioned, meant that the looming release of Jurassic Park was one of the most important moments of 1993 for me.

I saw the film while we were staying with family friends in Derbyshire, and I had my socks knocked off by it. I was the perfect audience for it; about the same age as the character of Lex (Ariana Richards, who I had a little crush on at the time), already knowledgeable about dinosaurs. I knew it was directed by Steven Spielberg who, four years previously, triggered my love of cinema with Indiana Jones and the Last Crusade. This was MY movie, and it was PERFECT.

The genius of Jurassic Park lies in its simplicity. Beyond the scientific jargon and corporate espionage used to ground the idea in something resembling reality, all it is at heart is this: Dinosaurs were cloned for a theme park. A group of experts are touring the park before it opens. Shit goes wrong. That was all I needed to understand at 11, the film was set in a sort of theme park and in essence it functions as a ride – we pay our admission and as the story gets laid out it is as if we are on the first part of a rollercoaster, being slowly winched up to the top of a steep incline. Then comes the drop, the twists, the turns. Spielberg is a – perhaps the – master of the ride movie. I’m not wild about his more sentimental work, nor most of his histories, but when you want to be taken on an adventure, there is nobody better.

25 years on, with four sequels behind it, a quarter of a century in advances in the technologies it pioneered and an older, arguably wiser and certainly more cynical viewer taking it in, Jurassic Park is an all but undimmed joy. In some ways it’s the exact same film and I love it in the exact same ways (these days it’s Laura Dern I’ve got the crush on), but now I can place it in greater context, and understand things I only felt at a gut level during that first viewing and many of those that followed.

At it’s best, film is transporting; it lifts you out of your seat, and places you in a different world. Jurassic Park does that in a single moment, first for the characters and then for us. The reveal of the Brachiosaurs and the reaction of main characters Alan Grant (Sam Neill) and Ellie Sattler (Laura Dern) serves as a pivotal moment on two levels. The first is for the film itself; the effects and the performances combine to make this the moment we accept the film’s premise and its world. Neill is particularly good here, putting across the disbelief of Grant as he sees in the flesh these creatures he’s spent his life studying, and making it an intensely emotional moment as well as one of pure wonder. Dern’s contribution is smaller, but, as she does throughout, she uses little interactions to cement the relationship between Ellie and Grant. It’s a moment that takes the wind out of everyone’s sails as they process the enormity – on a physical and a conceptual scale – of what they are seeing.

The enormity of this moment is something that extends beyond the world of Jurassic Park itself. The CGI revolution had been on the horizon since the early 80s, with pioneering work in the likes of Tron, The Last Starfighter and Young Sherlock Holmes. The 90s delivered advances, with Terminator 2 making a huge impact, but for me and likely for a generation of artists it was the Brachiosaurs of Jurassic Park that finally announced that the revolution had come. Much 80s and 90s CG now looks comically bad (look at the Playstation level graphics in Air Force One’s plane crash, for instance), but this shot has held up. That’s partly because of the care put into the pioneering work, but it’s also because Neill, Dern, Jeff Goldblum and Richard Attenborough are so good in the scene, they sell this to us as a reality as much as the effects do.

Spielberg and his team understood both the effectiveness and the limits of special effects. The combination of the digital work with full scale animatronics and other forms of effects work is key to how the film functions. Because we can see that certain elements of the key effects scenes are real, that they have physical presence on set, it is that much easier to buy into the digital illusions. The mix of techniques is also hugely beneficial to the actor’s performances. We see this most clearly in the scene with the sick Triceratops. Because this is a full scale puppet, Laura Dern and Sam Neill are able to interact with the dinosaur, forging an emotional connection with it for themselves and us as the audience. Neither this, nor the moment that Grant bends over to feel the animal’s breathing, would have anything like the same realism or impact were the dinosaur not actually there.

This combination of old and new technology with Spielberg’s brilliant eye and feel for both a standalone setpiece and the pace of an adventure narrative is the key to how Jurassic Park works, and his use of the Tyrannosaurus Rex throughout the film is a perfect example of this.

The way Spielberg builds up to the T Rex is brilliant, from having him not appear when he’s supposed to be seen on the tour, to the initial indicators of his presence; a glimpse here, a vibration in a glass of water there, to the final unveiling of the full scale monster. It’s a masterclass in suspense and delivery. As a kid identifying with Tim, the T Rex attack was intensely scary because I could absolutely see myself in his position, protected only by a caved in glass roof as this monster tries to eat him. Again, the fact that we as an audience have, to a large degree, accepted the illusion of these animals as real comes into play, intensifying the horror of this moment as it did the wonder of the Brachiosaurs. In this sequence, Spielberg doesn’t grant us an escape valve for the tension until the completion of the car in the tree sequence that it leads into. The next sequence with the T Rex plays a little differently. It echoes the tense build up (this time with the vibrating water in a T Rex footprint), but leavens the sequence with humour, from the visual gag of Gennaro (Martin Ferrero) getting eaten while sitting, cowering, on the toilet to Jeff Goldblum’s perfectly delivered “Must go faster” as they drive away from the pursuing Rex.

Having allowed the first half of the film to build fairly slowly, establishing the credibility of the park and the dinosaurs and allowing the characters to develop, Spielberg knits these and other setpieces together into a relentless second hour. While the first half is a lot better in this case, the pacing reminds me somewhat of Indiana Jones and the Temple of Doom, which to me feels slow for a long time, but is on rails from the second Indy enters that room full of descending spikes. I could spend hundreds more words breaking down why Jurassic Park works, and its impact on popular culture and the film industry. I could talk about the fantastic cast, from the stars down to a great early part for Samuel L Jackson. I could talk about the bits that have dated badly (Lex calling herself a hacker and the hilariously impractical OS for the Jurassic Park computer system). I could itemise the greatness of all the setpieces and talk about the way John Williams’ majestic score adds to the impact of seeing the park for the first time. Those things are all true, but ultimately I think the 11 year old me wins out on this one. Jurassic Park is great because it’s great. It’s new technology helping weave old fashioned movie magic in a way that takes me back to being the person I was when I first saw this film and takes me, once again, on an adventure 65 million years in the making.

It’s MY movie, and it’s PERFECT.