Grief isn’t an emotion that can be easily managed, or simply placed into a box and thrown to the back of the downstairs cupboard. It isn’t an emotion that is fleeting; it lingers, manifesting itself through our actions and often making them appear irrational and suspect. Three Billboards Outside Ebbing, Missouri explores this idea in […] 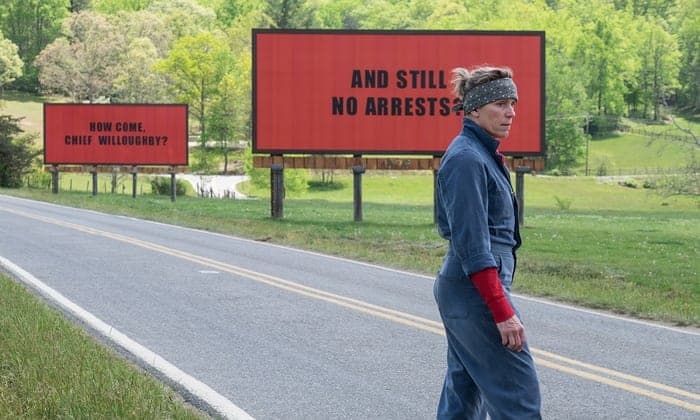 Grief isn’t an emotion that can be easily managed, or simply placed into a box and thrown to the back of the downstairs cupboard. It isn’t an emotion that is fleeting; it lingers, manifesting itself through our actions and often making them appear irrational and suspect. Three Billboards Outside Ebbing, Missouri explores this idea in a character study that is at times both volatile and devastating.

We first meet Mildred Hayes, mother of murdered teenager Angela Hayes, driving alone on a country back road just outside of the eponymous Ebbing in her station wagon, pausing in turn at three dilapidated billboards, and appearing to have what could be called a eureka moment. With the trail for Angela’s killer long gone cold, Mildred decides to buy the three billboards. Those billboards end up stating loudly her feelings towards the town’s lead investigator on the case, Chief Willoughby: “Raped While Dying”; “And Still No Arrests?”; “How Come, Chief Willoughby?”

The films initial movements are set up as if the film will take the solemn, slow walk to justice with a series of expected dramatic events, but director Martin McDonagh is not that kind of storyteller, and deliberately allows the film to twist and turn – the narrative purposefully taking the road less travelled, perhaps acting as a metaphor for the whole film? The plot focuses broadly on the central characters of Mildred Hayes (Frances McDormand), Chief Willoughby (Woody Harrelson) and Police Officer Dixon (Sam Rockwell), with the triptych narrative allowing each character to become incredibly well-drawn and offering each actor the opportunity to showcase career best performances.

McDonagh said in a recent interview that Three Billboards Outside Ebbing, Missouri was written eight years ago, before his previous film, Seven Psychopaths. It is arguably a good thing that this film was made post-Psychopaths, which felt baggier than McDonagh’s magnificent debut, In Bruges, and little bit like the director was suffering from ‘second album’ syndrome. This latest work is all the stronger for him having faced these challenges already, with McDonagh following through on his early potential by delivering a home run of a film that pulls no punches, and succeeds in getting the finest performance from Frances McDormand since her lead role in Fargo.

This home run is no more evident than in two scenes that are the complete antithesis of each other; one offering the necessary emotional pull of a high calibre drama, and the other so darkly funny not a shred of light can cut through. These scenes are fitting for a film that deals not in absolutes, but shades of grey – people and their actions are not black & white, and McDonagh’s characters can change on a dime, none more so than police officer Dixon, who is a low-IQ, Mamma’s-boy, seemingly destined to wreak havoc. Dixon is also an open and horrible racist, with a record of abusing black suspects in custody, accused at one point by an unimpressed McDormand with the correct level of hate, of being in the “nigger torturing business”, he replies with, “It’s the ‘person-of-colour’-torturing business”.

This was not the moment of dark humour I was referring to, but it shows a level of taste that McDonagh is willing to push. In less capable hands Dixon would be a one-dimensional character that offers nothing other than obvious outrage but Rockwell, along with McDonagh’s script, is able to draw Dixon as a character that has a believable and interesting narrative arc. At no point does this narrative arc absolve Dixon of the hate festering inside of him, and Rockwell is able to deliver a fine performance showcasing how a man can attempt to live a ‘good’ life whilst dealing with that hate.

McDonagh mines familiar themes in his work – family, death, anger, unclear forgiveness – and does so here to great effect due to tethering the main storyline to McDormand’s, Mildred. McDonagh’s previous work could be accused of being male centric, but here the pain, anger and hopelessness the main character feels are brought to the fore expertly by McDormand, who does not need a monologue to convey emotional gravitas – a snarled look or a bow of the head are enough. The storyline of her interaction with two policemen in an attempt to resolve her daughter’s murder may make up the face value of the narrative, but bubbling away underneath the surface is how the residents of Ebbing, Missouri are dealing collectively with a horrific murder within their tight-knit community, contrasted with Mildred’s stubborn, visceral response to it: she is attempting to re-find balance in her life, to stabilise her thoughts and feelings, and the film does a magnificent job at portraying this struggle.

The film’s central premise of how do you cope with grief when it consumes you is a question that is nearly impossible to unpick, thankfully McDonagh and McDormand have delivered a film that goes someway to answering it. Three Billboards Outside Ebbing, Missouri deserves all of the awards and plaudits coming its way, it is a true tour de force of a film.