Where Christopher Nolan’s Dunkirk looked at the British Army’s retreat from the European mainland almost exclusively from the perspective of the service men involved, Joe Wright’s Darkest Hour looks at the same events from the perspective of politicians behind it. Opening with Neville Chamberlain’s (Ronald Pickup) resignation as Prime Minister, the film covers Winston Churchill’s […] 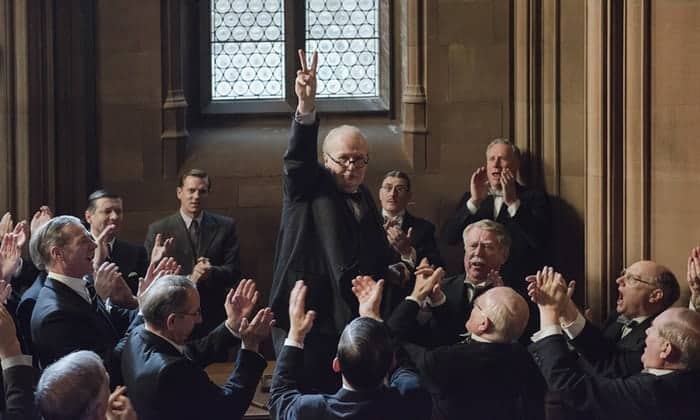 Opening with Neville Chamberlain’s (Ronald Pickup) resignation as Prime Minister, the film covers Winston Churchill’s (Gary Oldman) first month in office. Generally mistrusted by his own party, but seen as the only person that Parliament at large will accept, Churchill’s desire to resist the German advancements and drop any attempts at appeasement find him at odds with both the war cabinet and King George VI (Ben Mendelsohn), who still believe a peace agreement can be made. With the British Army facing annihilation, the only option left is a full scale evacuation at the French harbour town of Dunkirk.

As with most films that are based on real-life events, the plot can be compromised by how history played out – I’m sure Churchill didn’t plan the retreat from Dunkirk with future film adaptations in mind. The writers do admirably in their attempts to overcome these shortcomings. They add structure to the story that is told with hourly precision. It is a smart move to focus on a single part of the war and only on Churchill’s first month in office. There is no need to cover the entire war, after all we all know how the story ends. Director Joe Wright effectively uses sweeping camera pans through Parliament and on the battlefield, but cannot create the same dynamism when proceedings are stuck within the war or cabinet rooms. Instead they can feel stuffy, not helped by the smoke that billows from Churchill’s cigars.

Where Darkest Hour really shines is within Parliament, specifically when Churchill is making one of his famous speeches. It is hard not to get shivers when the words ‘We will fight them on the beaches’ are uttered. Even with prosthetics and makeup, Gary Oldman doesn’t quite look like Churchill, but his voice is a note perfect imitation. These scenes really illustrate Churchill’s command of language – we forget that he won the Nobel Prize for Literature in 1953.

Before seeing the film, I wondered if Churchill was an unplayable role; too recognisable, too revered, too iconic. Oldman doesn’t seem overawed by the character he plays and puts in a commendable performance. There is a real humour to his portrayal, and he taps into Churchill’s charismatic nature. At the same time, Darkest Hour doesn’t make the mistake that Victoria & Abdul made earlier this year of turning the historical figure at its centre into an object of fun. If anything humour emboldens Churchill, and disarms his detractors.

The script and Oldman’s performance play nicely on the image we already have of the wartime Prime Minister. This is by no means a revisionist account of Churchill, and the entire film is very palatable. There is the odd moment when his depression is implied and it would have been interesting if this aspect of his character had been explored further; it is not a side of our leaders that we often see, and would have allowed the story to cover new ground.

Darkest Hour is a charming and rousing film, and even though it is unlikely to change your view of Winston Churchill, it is hard not to be stirred when Gary Oldman utters his more famous remarks.