Screenwriter Aaron Sorkin has never been particularly interested in fact or historical accuracy, and even though he often builds stories around real life figures, they frequently have little in common with those at the heart of the source material. He has previously turned Facebook creator Mark Zuckerberg from a goofy university drop out into a […] 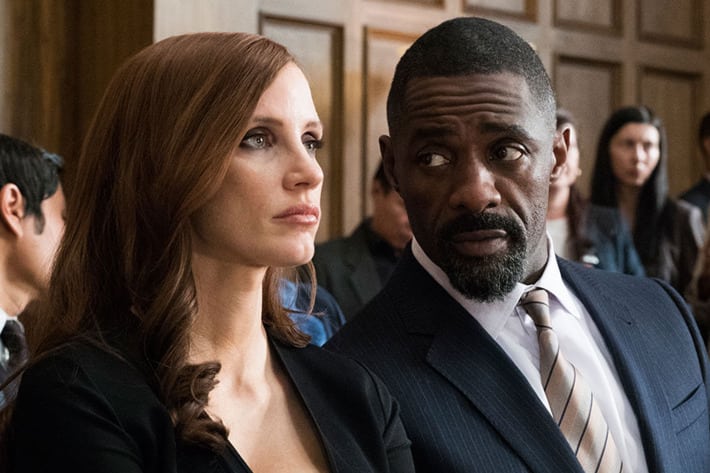 Screenwriter Aaron Sorkin has never been particularly interested in fact or historical accuracy, and even though he often builds stories around real life figures, they frequently have little in common with those at the heart of the source material. He has previously turned Facebook creator Mark Zuckerberg from a goofy university drop out into a spiteful and almost sociopathic character, with fans of the film even accepting Zuckerberg’s claims that Sorkin made a lot of it up. With Molly’s Game he returns with another somewhat true story that takes him behind the camera for the first time.

The film begins at the US team ski trial where Molly Bloom (Jessica Chastain) is attempting to make it to the Winter Olympics. Due to an unfortunate twist of fate, she trips on a frozen stick and is injured by a bad fall. After failing to make the team, Molly decides to take a year out before studying law, and after a couple waiting jobs decides to start a high stakes poker game. She manages to attract celebrities, Wall Street, and even the Italian mafia. Of course it can’t last, and following her arrest she is reliant on her lawyer Charlie Jaffey (Idris Elba) to save her from a long prison sentence.

Aaron Sorkin has built a huge reputation over the last 25 years as the creator of The West Wing and as the writer of A Few Good Men, Charlie Wilson’s War, The Social Network, Moneyball, and Steve Jobs. Up until now he has left the directing to other people, but with Molly’s Game he takes on this role for the first time. It is an unfair criticism but Sorkin’s direction is not as good as the likes of Bennet Miller, Mike Nichols, Danny Boyle, and David Fincher who have all previously adapted his screenplays. He has worked with some of modern cinema’s best directors and in comparison his work is merely serviceable. This is not to say that he does a bad job but that there is not the extra level of craft or stylistic flair to make Molly’s Game as good as The Social Network or Moneyball.

Similarly, the script does not have the depth or subtly of Sorkin’s very best work. The storytelling and dialogue are as good as we have come to expect, but its message can be reductive and overly simplified. In the end, the story of Molly Bloom can be reduced to the resentment she felt towards her father due to his affairs and to the stick that ended her skiing career. We may spend almost two and a half hours with Molly, but our knowledge of her doesn’t go any deeper than this.
What we are left with is an entertaining and often humours rise and fall tale of excess, manipulation, and greed. Much like The Wolf of Wall Street or American Made, it exists in a world that is fun to inhabit and there are plenty of thrills to be had. Player X (Michael Cera), Bad Brad (Brian d’Arcy James), and co can always be relied on to keep things interesting.

Molly’s Game may not be Aaron Sorkin’s best film, but it is still full of the snappy dialogue and energetic storytelling that has characterised his work over the last 25 years. Even though certain aspects of the script can be a bit reductive, it doesn’t really matter when the story keeps moving at a fast pace with barely a dull moment.