By Stephen Mayne There’s a grand ambition to Clash that belies its closeted setting. The entire film takes place in the back of a riot van. The van might move but the camera never leaves the confined metal space. Yet by throwing in a broad spectrum of Egyptian society, writer/director Mohamed Diab manages a near […] 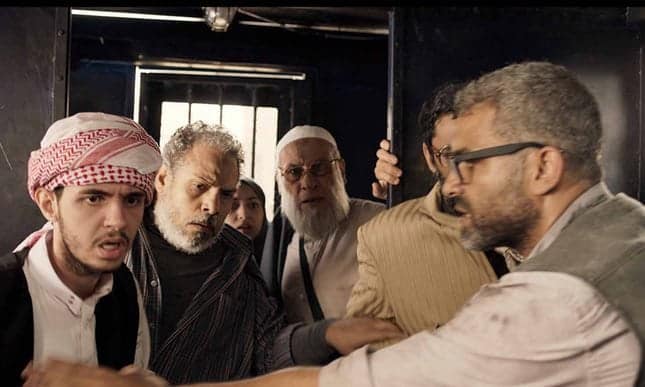 There’s a grand ambition to Clash that belies its closeted setting. The entire film takes place in the back of a riot van. The van might move but the camera never leaves the confined metal space. Yet by throwing in a broad spectrum of Egyptian society, writer/director Mohamed Diab manages a near perfect distillation of the problems facing a country wracked by uncertainty and division.

The action takes place in 2013 in Egypt after the elected President has been overthrown by the army. Opening text runs briefly through the 2011 revolution, the election of a President from the Islamic Muslim Brotherhood, and his subsequent downfall. Then the story starts mid-act as two journalists are thrown into the van. They’ll be joined by pro-army agitators, Muslim Brotherhood protestors, and even an army officer.

There’s a certain amount of artifice in the make-up of the van. The neat split of opposing views is too tidy; like a sanitised stage production. As they progress through a turbulent day, plenty of opportunities to pontificate on the political and social situation in the country will be found. Sitting next to these bolder conversations are moments of human connection that could have become forced. That they don’t is a credit to the organic feeling Diab fosters throughout. He’s not out to point score, nor is he making a paean to togetherness.

Instead, Clash is careful to place the inhabitants of the van in a grey zone. Each person inside has obvious and less obvious allegiances. Friendships shift and common ground is found and lost. Watching fragile connections spark and disintegrate, too brittle to overcome deeper animosity, is painful. The people inside work together to gain bathroom access, block out tear gas, and share turns at the open door in stifling temperatures. They even ration water. Then lines will be drawn again.

What’s particularly impressive about Clash is the shifting scale each character exists on. People from both sides back their causes with varying degrees of commitment. Some are only on the streets for others. Even the two journalists fail to see eye-to-eye for much of the running time.

Diab displays a wonderful ability to sum people up naturally. At one stage the Muslim Brotherhood members, all wearing identifying armbands, organise themselves. It’s easy to see how they might have won power in the elections when facing the disparate bunch sharing the van with them. Yet they are not immune to splintering, and also sway between despair and belligerence . The journalists are mistrusted pawns – for who varies depending on the accuser – and the anti-Muslim Brotherhood protestors lurch between defiance and fear.

Stuck inside, half-glimpsed landscapes change to keep things feeling fresh. Night turns to day, peace turns to attack. By the end a full-on light display complete with fireworks, smoke, and a barrage of rocks shake their world. It’s a mess and it won’t end well. No one can work out which protest is which, with the armed forces stuck somewhere in-between; both oppressors and victims. Clash is bold and innovate storytelling, and a deeply convincing evocation of chaos. Achieving all this without leaving the riot van is remarkable.

Clash is on general release from Friday April 21st.