So far this series has been about horror films, a theme that will continue through most of the entries, but there are other kinds of films that the BBFC, historically, has had issues with. Martial arts and other action films sometimes struggled with the board under James Ferman, not least because of his dislike of […] 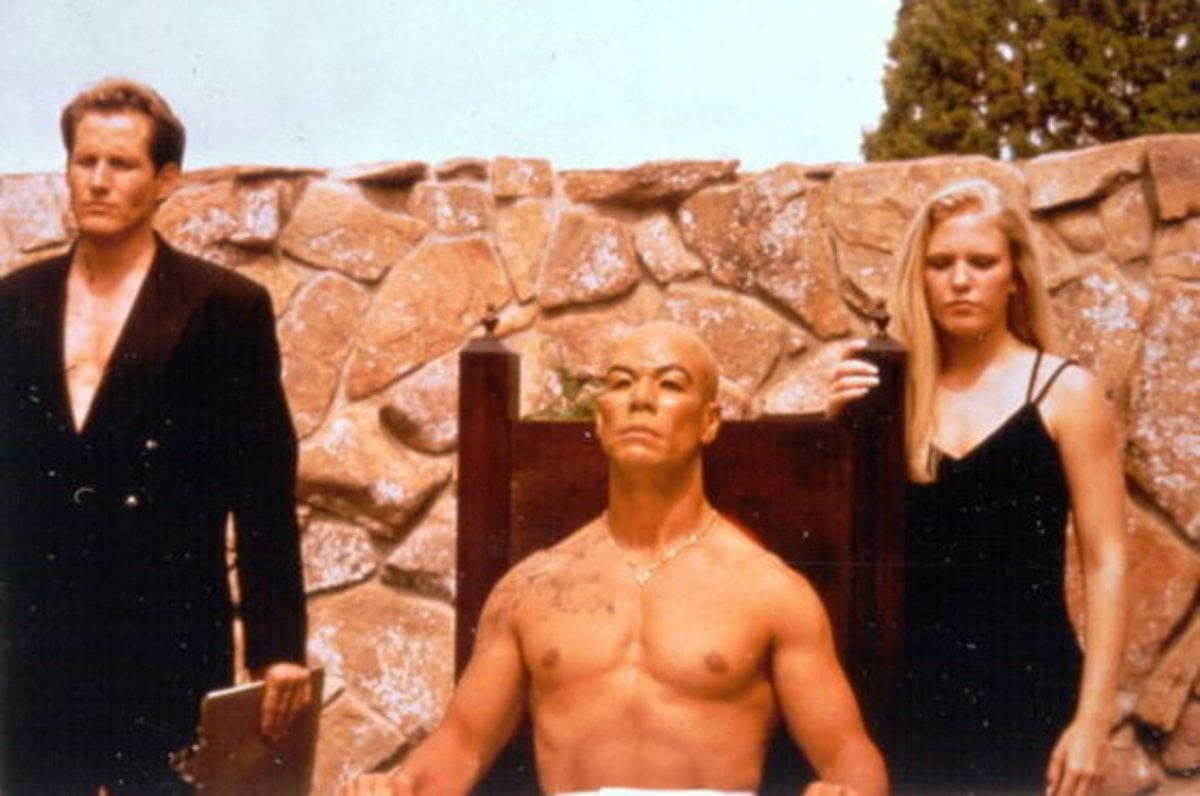 So far this series has been about horror films, a theme that will continue through most of the entries, but there are other kinds of films that the BBFC, historically, has had issues with. Martial arts and other action films sometimes struggled with the board under James Ferman, not least because of his dislike of certain weapons. Throwing stars came under great scrutiny and nunchucks were completely prohibited, to such an extreme that a scene was cut from the Tom Hanks and Dan Aykroyd starring Dragnet because they were standing in front of an Enter The Dragon poster on which Bruce Lee was holding the chain sticks.

When I approached watching Kickboxer 4 – banned from 1994 until 2004 – I assumed that these elements would be part of why the ban was imposed. They aren’t and frankly, though BBFC did explain their decision at the time, having seen the film I struggle to find the rationale for banning it, even under the more restrictive standards of the .

I was concerned going into Kickboxer 4 that I wouldn’t understand what was sure to be a labyrinthine plot full of intrigue and rich characters, having only previously seen the first film and its reboot, Kickboxer: Vengeance. Helpfully, the film spends the first four minutes recapping previous instalments as Sasha Mitchell’s David Sloan writes a letter to his wife from prison, presumably just to be sure she’s up to speed on all the exposition. The main plot finds Mitchell offered a chance to leave prison by the DEA, on the condition that he fight in a tournament hosted by series villain Tong Po (Kamel Krifa). The winner of the tournament gets to face Tong Po, and Sloan wants him as much as the because Po is holding his wife hostage.

I confess I wasn’t expecting much from Kickboxer 4, but if anything it under delivers. A threadbare plot is perfectly acceptable for a martial arts film, and if you walk in expecting performances then you’re almost certainly setting yourself up for disappointment. That said, Albert Pyun and David Yorkin’s screenplay is incredibly basic, and the cast brings little to it. Sasha Mitchell is a probably a better martial artist than he gets to show here (we’ll come to that), but he’s no actor, in fact he’s barely a screen presence. Mitchell is, at best, an . He delivers his lines with a hoarseness that sounds like someone trying much too hard to sound intimidating and, while I definitely wouldn’t want to fight him even now, it doesn’t really convince. At both story and acting level the idea that he’d be an effective undercover agent is laughable. Tong Po has had a personal vendetta against Sloan and his family for YEARS. Sloan walks in to the tournament without any attempt at a disguise and simply expects not to be spotted. It’s just one step too silly for me.

Of the rest of the cast, only Kamel Krifa has much of a character to play. You get the sense in the tournament scenes that he’s having fun just being an evil bastard, but Krifa lacks the imposing physical presence and accompanying aura of menace that I remember the original Tong Po (Michel Quissi) possessing. This isn’t helped by the awful makeup applied to make him look more like Quissi.

All this said, performances and plausibility are not exactly the main attraction for the audience of Kickboxer 4, so it’s a severe disappointment to find that the fight scenes, while plentiful, are a decidedly mixed bag. Up until we get to the tournament itself, every fight plays as if it is a half speed rehearsal that accidentally got left in the final cut. This is especially pronounced in an early bar fight sequence in which Sloan decks a collection of redneck stereotypes because they just beat up a girl (martial artist Michelle ‘Mouse’ Krasnoo, who doesn’t get to show her skills off nearly enough). It’s so slow and impactless that at times it’s funny, especially when Mitchell does a listless roll across a pool table. The terrible choreography also takes away impact from one of the most threatening figures in the film, whose deliberately slow and methodical style is dulled by the fact that the first time he appears it looks like more awful blocking rather than a stylistic choice. Happily, things pick up in the tournament scenes, making me wonder whether the fighters in the cast were afforded more freedom to work out their own blocking for these scenes. The quality of the fights remains erratic though, right down to a final confrontation that is tediously one sided.

After an initial rejection, Kickboxer 4 came back to BBFC with (unspecified) cuts. It was again rejected, with the board saying that “the cuts failed to make an acceptable difference to a work in which fights to the death were staged in the kick-boxing equivalent of a Roman Circus. Purporting to condemn the practice, it was plainly exploiting it, since the work was itself a celebration of extreme violence as entertainment.” The later tournament scenes are violent, with repeated neck and arm breaks that could well have been seen as problematic under the BBFC’s imitable techniques prohibitions, but for me, and I suspect many other viewers, much of the film’s violence is undermined by the incompetence with which it is made. The argument about exploiting violence, even given 1994 standards, doesn’t hold up for me. Enter The Dragon, which Kickboxer 4 is clearly looking to and which much the same could fairly be said about, had been on video since 1988, albeit with the nunchuck scenes cut out.

It is hilarious that Kickboxer 4 was ever banned, that BBFC ever gave – even accidentally – any sort of cachet to this barely competent direct to video martial arts movie that few people would have even thought about a month after its release had they allowed it out, even with cuts. In contrast to I Spit On Your Grave, there is nothing that remains shocking about this film, nor anything that would have been seen as shocking at the time. Unlike Headless Eyes, it is not strange enough to be interesting despite its lack of competence. Kickboxer 4 is exactly what you think it will be; a rubbish martial arts film with a slight glow of recognition around it because a few censors once tried to tell you not to watch it. Skip this one.