By Stephen Mayne @finalreel Roy Andersson’s films are so uniquely his own it’s hard to reconcile them with the world around us. Yet were anyone to venture into the idiosyncratic Swedish director’s head, I strongly suspect they would reveal themselves as a weirdly precise form of documentary filmmaking. A Pigeon Sat on a Branch Reflecting […] 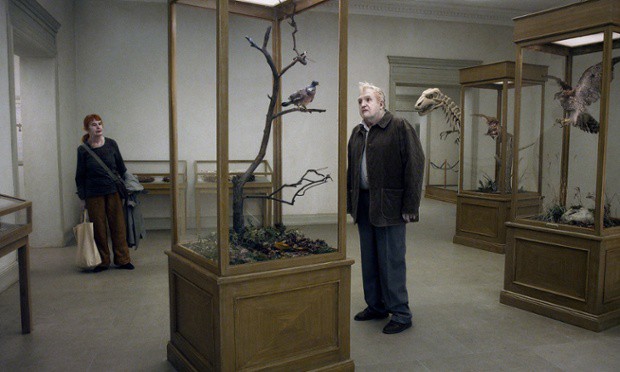 Roy Andersson’s films are so uniquely his own it’s hard to reconcile them with the world around us. Yet were anyone to venture into the idiosyncratic Swedish director’s head, I strongly suspect they would reveal themselves as a weirdly precise form of documentary filmmaking. A Pigeon Sat on a Branch Reflecting on Existence, the third in his loosely connected “living” trilogy, resembles a world watched from afar by a viewer not completely familiar with the ways of the human race. It’s a brilliantly off-kilter experience, seemingly unlimited in scope and free of tawdry compromise.

The title references Pieter Bruegel the Elder’s 1565 painting, The Hunters in the Snow. The headline pigeon can be seen watching over the action unfolding below. Andersson, taking this as a starting point, has wrapped in a chain of tales viewed through foreign eyes. If there are two main characters, its Jonathan (Holger Andersson) and Sam (Nils Westblom), novelty joke salesmen who wander around bickering with each other and trying to flog cheap tat with barely a flicker of emotion. In and around their journey, and they serve as only the most approximate of guides, Andersson roams freely over a Sweden where people die in short comic sketches, a modern day bar is remembered in its World War II pomp, and King Charles XII (Viktor Gyllenberg) crashes free of history to ride into a present day café on his way to face humiliation at the hands of the Russians three centuries in the past.

With so much going on, the camera keeps out of the action to prevent distractions. Composed through a series of static shots, the focus is on the best possible angle to capture multiple layers of stiff, absurdist life. When Charles XII rides into the café, female patrons run, others in the background are whipped and more cower. When the bar lapses into a sing-along, military tables provide the music, civilians sit quietly by, and the plucky get up to receive a drink in exchange for a kiss with limping Lotta. It’s exquisitely paced, refusing to rush the beautifully composed tableaux’s.

Indeed, every shot is immaculately framed and rammed full of detail. That detail extends from elaborate set-ups to small scenes. Near the end, following a row, one of the dispirited salesmen sits on a bench. As he fails to sell his products to an uninterested member of the public, someone in the background bangs a shoe on a hut inadvertently bringing out the owner. Every action draws the eye; everything builds out this world that is at once far-removed and disconcertingly familiar.

I first saw A Pigeon… in Venice last year where it deservedly walked away with the Golden Lion, towering above anything else the world’s oldest film festival had to offer. Blending borderline incomprehension with low laughs and high musings on life, death, and all that falls in between, the festival circuit and art-house cinemas feel like a natural fit for such a wilfully unclassifiable film. But it’s one that speaks to us all in its own meandering way. If Andersson’s tragi-comic musings on life seem strange, how often does the world we live in ever really make sense? Life is a blurring of apparently unconnected sketches combining the beautifully sublime with the glaringly ridiculous. In recognising this, Andersson may be closer to the truth than any of us.

A Pigeon Sat on a Branch Reflecting On Existence is in Cinemas from Friday April 24th.