by Keith Ayago
in Entertainment 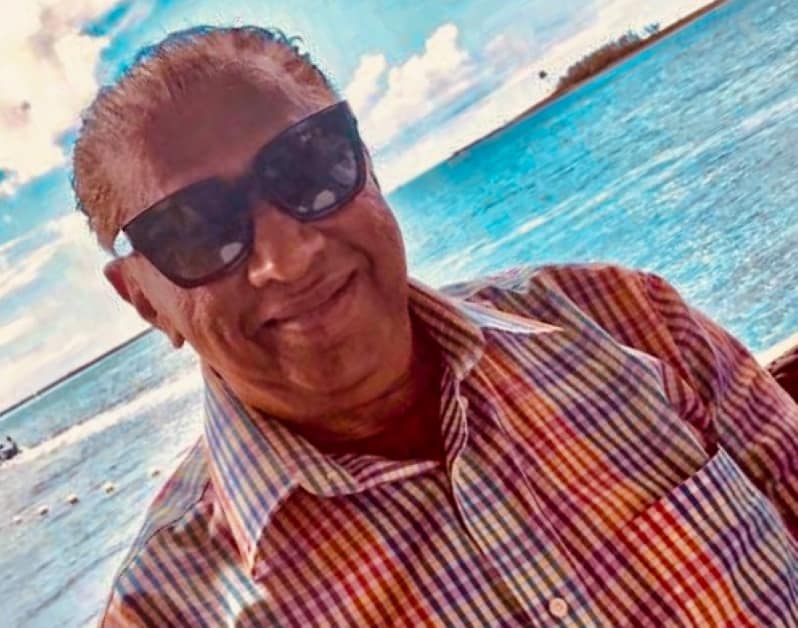 In addition to carving out a distinguished medical career, Dr Cliff Bacchus has built a reputation as a novelist unafraid to tackle challenging social issues, most recently the practice of intermarriage between cousins.

By the time they reach their sixties, most people would be looking forward to retiring and taking things easier. For medical doctor Dr Cliff Bacchus, however, it marked the launch of a second career as a novelist.

For the Bahamas-based author, who also runs two busy pain management clinics in the country, writing is a much-needed creative escape from the pressures of the ‘day job’.

Since 1974, he has served the medical needs of the Bahamian island that has been his adopted home since he left his native Guyana to study medicine in what was then Communist Russia.

During all that time, he has consulted “the rich, the famous, and the less fortunate” with equal attention, and care for all, initially as a senior medial officer working for the government before going into private practice in the early 2000s.

His standing as a physician also led him to be cast as a doctor in 2007 Bahamas-set Hollywood film Bad Girl Island after he conducted the medical examinations for the director, Stewart Raffill, and crew.

Perhaps somewhat unsurprisingly, Dr Bacchus draws heavily upon his training and experiences for his novels — also including his literary debut, 2007’s A Doctor and a Gentleman and 2011’s Do No Harm — in the sense that they are all fundamentally driven forward by a thought-provoking consideration of contemporary medical issues or ethics.

In the case of Curses of Cousins, the narrative is wrapped around an exploration of intermarriage between cousins.

It is a practice that goes on not only in certain communities within the Bahamas but around the world, including the UK. While perfectly legal, it is a semi-taboo subject within society, hardly spoken of.

The problem is that this practice also carries with it a serious risk of genetic defects in any resulting offspring. Indeed, it is believed that two children born from such unions die in the UK from resultant genetic abnormalities every single week.

In the novel, the protagonist, teacher Brooklyn Watts, sets out to find out why her family, and many other families on the fictional Bahamian island of Sigatoo, suffer chronic, incurable illnesses.

In her case, it is alopecia and multiple sclerosis (MS), and, as she quickly comes to learn, her and others ill-health, previously attributed to a ‘curse’, is in fact a direct result of the traditional island practice of cousin marriage.

Despite the pain she suffers daily from her debilitating condition, she sets out on a quest to educate the population about the risks that such marriages carry to the next generation.

For Dr Bacchus, who was named Physician of the Year by the Government of the Bahamas in 2000, it is a vitally-important health issue to address.

“I got the idea for Curses of Cousins as I have had several patients with genetic-based conditions that resulted from intermarriage between cousins,” he says.

“I’m not calling for the practice to be banned outright, but there needs to be an open acknowledgment that children of such marriages run a significant risk of inheriting genetic defects that could impact their quality of life.

“With this awareness then, at least, those who still wish to enter into such relationships can understand the importance of carrying out genetic counselling and blood tests to ensure a healthy progeny.”

The novel is also notable for another battle that Brooklyn must face while trying to confront ignorance, superstition, and traditionalism within her society: a war between the literal forces of good and evil for control of her mind.

“I do believe that beyond the physical we are all attuned to a higher, cosmic consciousness.

“In Curses of Cousins this war between the personifications of good and evil adds a deeper level to the reader’s understanding of Brooklyn, and also another perspective on the obstacles she must overcome from certain parts of society in bringing about positive change.”

As well as praising his latest novel for its originality and daring to broach the pressing issue of cousin marriage, reviewers have also highlighted Dr Bacchus’s realistic depiction of a female lead — a rare achievement for a male author.

This, however, is something that he attributes as much to his environment as his writing skills.

He says: “All my life I’ve been in the company of women. My children were all girls and in all my years of practice I have worked alongside female nurses.

“It’s given me a better understanding of the female mind than most men, I think, and it is wonderful that readers and reviewers concur.

“Brooklyn was a fascinating character to create, being independently-minded, courageous and determined to protect future generations so that they wouldn’t suffer in the same way that she does.

“Some readers have called her inspirational, and that makes the whole writing process more than worthwhile.

“I always intended to highlight the issue of intermarriage through fiction because it stands a much better chance of reaching the widest audience, compared to a dusty old academic paper that will never be read by anyone save other doctors.

“But a novel stands or falls on whether the central character engages with readers, so it looks like all those years in almost exclusively female company has paid off.”

As to the future, Dr Bacchus is already working on his next novel, which will be focused on another global issue — world poverty.

“Writing keeps my young,” he adds. “It’s far more relaxing the medicine while also providing the opportunity to communicate with the world.”

Dr Cliff Bacchus discusses his new novel, psychological thriller Curses of Cousins, and what motivates him as an author.

Q. What was your motivation for becoming an author?

A. To expand my outreach to people around the world.

Q. Your latest novel deals with a very grave subject: the risk of genetic abnormalities from intermarriage. Why did you feel it better to cover this subject through fiction than nonfiction?

A. Through fiction, I can reach more people, and generate more interest through theme, plot structure, unique characterisation, and suspense.

Q. What do you hope readers get from reading your new novel, Curses of Cousins?

A. I want them to grasp the theme: that cousins marrying cousins may not be the best for the children you give birth to. However, this is not a concrete rule. There are many who intermarry because of custom and religion, but it is time to reflect on the subject. If it works for you, fine! It is my point of view, based on experience as a medical doctor for nearly five decades.

Q. How did you get the idea for your latest novel?

A. From my medical experience over many decades.

Q. Describe a typical day in your life…

A. I rise early, write for two hours until clinic time, 8 am to 11 am. Then it’s clinic again from 3 pm to 5 pm, followed by a walk and watching BBC news, CNN and talk shows, or a spot of painting on canvas. Bedtime is by 12 midnight.

Who are your literary inspirations, and why?

Q. All your novels include a metaphysical element. Can you explain why you feel it important to weave this into your stories?

A. Metaphysics deals with abstract concepts such as being, knowing, identity, time, and space. My novels are just about that. My novels must have meaning!

Q. If you could offer one piece of advice to somebody wanting to become an author, what would it be?

Q. What satisfaction does writing bring you?

A. Knowing that I can communicate the truth and hope for the acceptance of it.

What can readers expect next from you?

A. Another work of fiction as I hone the craft for better and better.