As UK theatres fret over how to respond to the increasing national and global crises that are hitting or emerging from our shores in wave after wave of tsunami like proportions: Brexit, Syria, the refugee crisis, Russia, Crimea, Ukraine, Belarus, the Greek meltdown, Egypt, Spain, the Occupy movement, Trump, Brexit, Brexit again, back to Trump […] 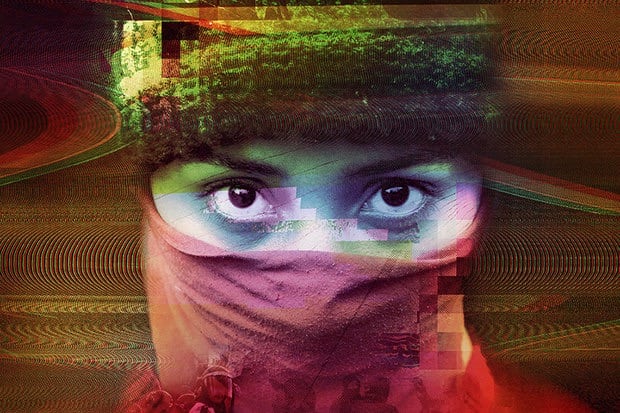 As UK theatres fret over how to respond to the increasing national and global crises that are hitting or emerging from our shores in wave after wave of tsunami like proportions: Brexit, Syria, the refugee crisis, Russia, Crimea, Ukraine, Belarus, the Greek meltdown, Egypt, Spain, the Occupy movement, Trump, Brexit, Brexit again, back to Trump etc, the Young Vic, in partnership with Totally Theatre Productions, have come up with an unusual way of trying to make sense of it all with a stage adaptation of journalist, filmmaker and now theatre maker Paul Mason’s book Why It’s Still Kicking Off Everywhere.

The book itself is a very informative and an often hard hitting enjoyable dissection of current and near past revolutions inspired and enhanced by our easy access to new and sophisticated communication technologies in comparison with past global revolts like 1905 and 1789.

Out of the several important points it makes, one stands out: it was instant messaging and virtual communication technologies wot was starting to win revolts brought about economic crises and oppression (for recent revolutions everywhere)- and partly these same technologies wot lost it (for the revolutionaries everywhere) depending of course, as one audience member pointed out in the discussion afterwards at the performance I attended, which side you are on.

In this stage version Mason plays himself. Or rather a past self also called Paul, a video journalist embedded within the revolutionary front lines during the Arab Spring, Greece 2008, Occupy London 2011, etc.

He gives lectures to London students occupying art galleries and universities about the communes in Paris in the 1800s  with groups of youths from council house estates looking on, a part of it, but not quite. He chats with Greeks who are out on the streets in Athens and is tear gassed, visits Cairo’s Moqattam slums to talk to the zabbaleen, or “garbage people.”

On this staged whirl wind tour he is aided and abetted by three actors, Khalid Abdalla, Sirine Saba and Lara Sawalha: all of them seem to have been or are protestors themselves in real life.

The show, at two hours and a bit, begins on a wave of optimism, concentrating on those who find themselves mobilised to occupy spaces in order to shut down or at least hinder the workings of governments, institutions and corporations, they are the poor, the students, Black Bloc protestors, unpaid protesting mercenaries (kind of) armed with laptops and blackberries who catch a plane to wherever it is kicking off.

It ends, well, with the opposite extreme, with Donald Trump, lots of images of Trump to be precise, as if this may be weirdly cathartic somehow to have to stare at his grimacing unhappy face.

However, the show warns us at the beginning not to be too hopeful. Anyone who has read the book anyway, will know not to be. We are looking into the near past after all and we all know how it has turned out because we are all living the consequences of it. Mason gives us a warning, quoting Brecht’s analogy between Epic Drama and witnessing a car crash.

This car crash is what we will witness although here the audience aren’t allowed to be merely just that. This might be what director David Lan means, amongst other things, in his introductory speech to the show when he says that this is a new kind of theatre, it is something that the Young Vic has never done before, it is an immediate shooting from the hip response to what is happening and theatre at its best.

And it is apparent that it is different. The audience walks in and on to Jeremy Herbert’s Agora like “stage” where classical marble pillars are replaced by gritty orange sodium looking street lamps, suggesting that revolutions no longer take place in the Greek meeting areas, but come from the streets or perhaps a mix of both.

A rebellious atmosphere rubs up against the spiritual sense of Herbert’s design and which Mason comments on: this space is where connections can be made and discussions had, but the space is also the streets, where the protests take place, perhaps as a result of the discussions.

The audience is invited to perch on the platforms running around the Maria studio’s periphery. This enables, at least to begin with, a dissolution of hierarchies. Groups are formed and discussions are begun by the play’s actors and Mason himself on how to make gas masks out of plastic bottles.

Mason jokes it is like Blue Peter. At one point I fully expect to be handed a print out of a lawyer’s phone number and told to pen it on my arms, in case I lose the paper. This is how real it seems. This sense is developed when audience members are taught the chants that are the songs for the different protests and at various times, we are invited to become these protestors as the play visits them.

Some audience members are also chosen, via perhaps the sortition method that was used in 2008 Athens to choose speakers by lot rather than hierarchy, to become the real characters Mason met there and read out their lines. The effect of this, whilst mimicking Brecht’s Verfremdungseffekt, is also to remind every one of life’s complete randomness.

Not of capitalism’s consequences or of the fact that Greece’s social classes in the top tier was made up of rich oligarchs and doctors and dentists, but randomness on a more personal, individual level. The randomness that I live in London and not Athens. Therefore what is happening affects me very differently.

Understanding the analysis of technology is key to understanding the show’s doppelgänger nature. The ability of the student young/and or motivated articulate poor and middle classes and non rentiers (one presumes) to plug into a virtual world has made the revolutionaries into “Jacobeans with laptops” to quote Mason’s famous phrase.

For a moment, all across the world, from Athens to Michigan, it seems like the networked individual, using private messaging and digital comms is part of a mass movement that might be able to defeat traditional hierarchical structures (vertical top down) through the “horizontalism” that technological communications allow.

Mason himself thinks this will happen. But what happens is the opposite. Because what happens when this virtual world meets the real one that has bullets, tanks and tear gas? Or when hierarchies themselves harness technologies to mount an offence of their own and come up with fake news? What happens when people just become exhausted?

It is a theme Mason comes back to again and again in this revolutionary  play in which David Lan has the ghost of cross-dressing French Revolutionary Louise Michel haunt the stage like a physical meme, one that transcends centuries. Everyone is exhausted. The actors in the play, including Mason, are exhausted.

We the audience members, taken through reams of Ali Hossaini’s video of the ruins of war, protests and economic decline, are exhausted.

And what happens when commentators get it wrong? At one moment, an actor protestor accuses Mason of being partly to blame for this car crash. This is confessional theatre may be, Mason the narrator turning his analytical powers on himself. At this moment Nicki Brown’s lights go down to black. Although it feels an unfair accusation, Mason has no answer, or cannot answer.

Yet this is a pertinent moment in the show. What is unsaid or what Mason could have said is “Hey, you expect too much of me.” What is alluded to here is nearly everyone’s ingrained subconscious need and desire for a leader, for institutions, for hierarchy, for someone to look up to, for someone for whom no sacrifice is too much, someone who is willing to try to appear to know what they are doing or knows what they want, or really believes that they actually do know.

Yes, someone like Trump. For some, Trump really is this person. The show’s last unforgettable image is slowed down video of the 45th US president either at a press conference or one of his conventions. It is the show’s Fahrenheit 9/11 moment. This is what happens when we all get exhausted and desire someone, anyone to be leader, it might be saying. And it is horrifying.

Yet this is not the ending one takes away if one wishes. The house lights come up and now there is a discussion. We are freed from Trump’s grimacing face looking down on us like something out of George Orwell’s 1984 (though without the authority, Trump does look like he might cry, this is why it has parallels with Bush’s own brain freeze when he was told about 9/11) and a kind of non hierarchy is restored.

Someone asks, what do we do now? Belarus Free Theatre’s co-artistic director Natalia Koliada, whose actors have been imprisoned and hospitalised by the police in Minsk during the recent protests against Aleksandr Lukashenko’s dictatorship, answers.

She uses a simple story of what BFT in Minsk will now do after their underground show has been cancelled due to the arrests. They will go, she says, to the prison in Minsk and sing Belorussian songs for the protestors illegally imprisoned there to remind them that they are not alone, that they have solidarity.

It may not seem much, says Koliada smiling, but it is.  It reminds us that smaller acts of protest matter too, not just the bigger ones.

And this kind of sums it up. As the shows ends with a quote from political theorist Hannah Arendt, I am reminded of something else that Brecht said about theatre: “Don’t expect theatre to satisfy the habits of its audiences, but to change them.”  This kind of show is a start and a perfect and inspiring response to what’s happening. And we need it. And more like it.

Why It’s Kicking Off Everywhere has now finished its short run but there will be a TV broadcast on BBC 2 later in the year. Find out more here.

You can also find information on Paul Mason’s up coming show at the White Bear, London, here.

The reviewer received a ticket via ballot for this show