Review by Ben Holliday After a two-week hiatus, Preacher makes an explosive return to our screens with Episode 2 exclusively on Amazon Prime Video in the UK. Similarly, to the first episode, this was a slow burner, tentatively building the suspense surrounding our main cast of characters. However, episode 2 makes use of its cable home, […] 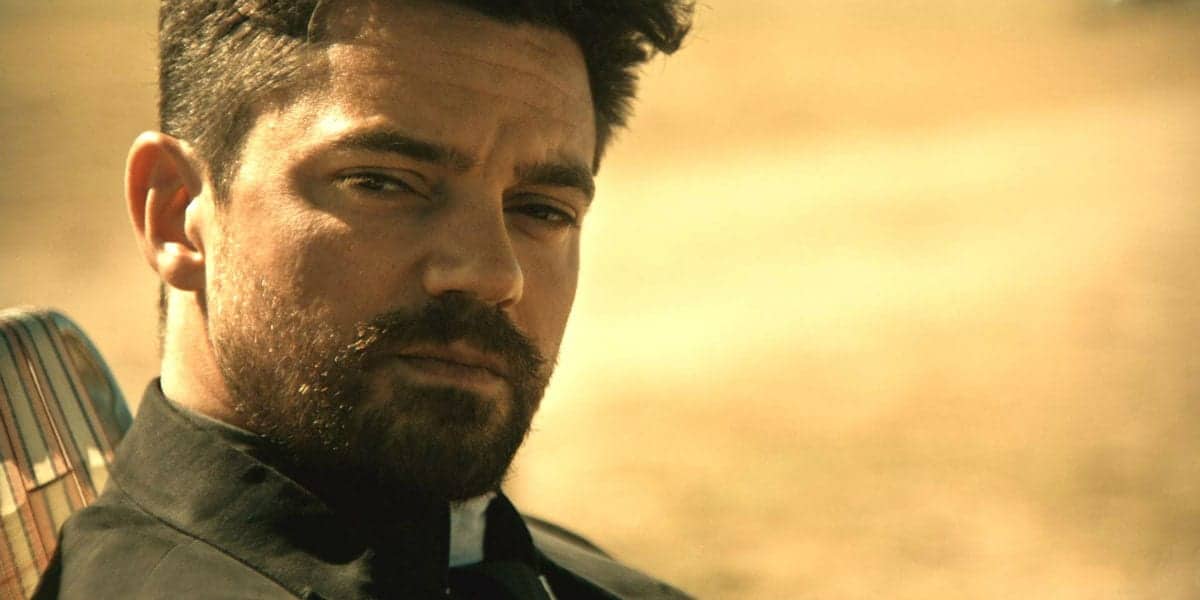 After a two-week hiatus, Preacher makes an explosive return to our screens with Episode 2 exclusively on Amazon Prime Video in the UK. Similarly, to the first episode, this was a slow burner, tentatively building the suspense surrounding our main cast of characters. However, episode 2 makes use of its cable home, with incredibly graphic and impressive action scenes truly upping the ante.

Now that isn’t to say that character building is foregone in the name of blood and intestinal fluid. The episode picks up with Jessie (Dominic Cooper) embracing his renewed passion for the church, baptising members of the town of Annvile in an attempt to wash away their sins and bring them a tad closer to Christ. The preacher even goes as far as to canvas ideas for the church outside local hotspots; whatever possessed him at the end of the previous episode is seemingly working on the side of god.

Continuing in her quest to test this new-found resolve is Tulip (Ruth Nega), poking fun at Jesse and his mission to do good. Whilst he holds strong for now, I have a sneaking suspicion that Tulip will find a way. We’re still none the wiser in terms of what her stolen map contains and one scene in particular seems lost in the grander context of the episode. Nega is tremendously engaging whenever she’s on screen and is just a firecracker waiting to explode. You never feel particularly comfortable for the lowlifes surrounding her and hopefully, upcoming episodes double down on her screen time – she truly is that magnetic.

The standout of this episode is Cassaday (Joe Gilgun). His background gets further fleshed out in a battle of ideologies with Jesse and we see that he’s a pretty proficient killer, brutally offing the two mystery men, Fiore and DeBlanc that we were introduced to at the end of the pilot episode. Black humour permeates through this scene and kudos to the genius that suggested a torn off arm could still operate a chainsaw with near disastrous consequences. The fight scene is a bloodbath and provides a great middle point for the episode.

This hour is a triumph because it highlights the plight of the Preacher in a modern, arguably godless society. This is a man who above all is supposed to believe in god and his divine vision unquestioningly, yet at every turn, he is confronted with characters and situations that threaten to derail all he has built. At the town baptism, a school bus driver confesses that he has perverse thoughts towards a young girl he drops off every day. Rage simmers beneath the surface of Jessie but he decides on the ‘church approach’ and recommends the driver seek forgiveness and pledge to never have these thoughts again.

He visits the young victim of a horse riding accident and the family treat him with disdain, stating that the food he brought over for lunch has more value than the pointless word of god. Jesse feels helpless to help and that combined with temptations of Tulip may just be why he falls back into his old ways. Here he tests out his newfound abilities consciously for the first time. You can’t help but think this may have disastrous consequences yet again.

Now the episode isn’t perfect – whilst pacing is very reminiscent of Breaking Bad, the episode tends to introduce us to new characters and time periods without much connective tissue. Whilst I’m in for the long haul, I can see how more casual viewers may be put off by some of the ambiguity and disjointedness. The god-like powers of Jesse are also given a backseat until the dying minutes of the episode providing a feeling that we’ve seen it all before; after all, it’s pretty much where we left the Preacher last time we saw him. As mentioned above Tulip is one of the strengths of the show but it feels like the character is being held back for now in service of the plot.

Still, this is another fantastic outing and with fan favourite characters like The Saint Of Killers and Odin Quincannon being suddenly and gruesomely introduced, it seems viewers will be rewarded quickly for sticking around. The show continues to juggle its serious subject matter and black humour expertly and with this being the weakest of the opening four episodes sent out to reviewers, trust me when I say there is a lot to look forward to.