Review by Leslie Byron Pitt/@Afrofilmviewer As we are seemingly embarking on a more skeptical and paranoid, right-leaning era, it’s more than a little disheartening that Trumbo pulls it’s lefty punches and holds no real political relevancy. Whether this is partly due to the film being made way before the feverish excitement of Trump delirium, or […] 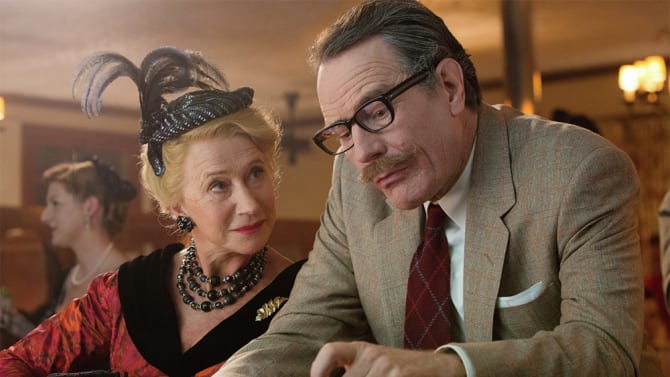 As we are seemingly embarking on a more skeptical and paranoid, right-leaning era, it’s more than a little disheartening that Trumbo pulls it’s lefty punches and holds no real political relevancy. Whether this is partly due to the film being made way before the feverish excitement of Trump delirium, or the simple fact that director Jay Roach is only really interested investing in the political aspects Hollywood’s golden age with the spikes removed. These are questions that only the filmmakers can ask. However, it’s in the reviews of more conservative writers such as Armond White, in which some barbs about Trumbo both the man and the film can be found. Pity we don’t see it in the film itself.

While I didn’t find the humour as misjudged and sneering as White’s aforementioned review, Trumbo is the type of film which is filled with laugh-once moments of wit. John McNamara’s script is full of moments set up to make an audience member wink and nod with a knowing “ah-ha”! Before evaporating quickly as if it never really existed.

The film itself starts off well, as we see the titular Dalton Trumbo (A watchable, yet sometimes cartoonish Bryan Cranston), a part of Hollywood’s elite refuse to co-operate with the House Committee on Un-American Activities for his ties to communism. It’s in the films opening act in which Trumbo gains the most interest. Quickly setting up the players in the game and their alliances, the film’s most notable moment involves Trumbo knocking John Wayne down a peg due to Wayne’s lack of involvement in the Second World War. It’s the kind of moment that still feels relevant when we consider the likes of certain, modern right-leaning media personages. Figures whose feverish patriotic discourse may not completely match up with their actions.

“There are many angry and ignorant people in the world, and they appear to be breeding in record numbers.” utters Trumbo at one point. Indeed, when looking at the more demented reactions to our current social ills, be it from the left or right, the line feels more and more accurate. Soon after this moment, the film begins to fire off target.

After we see Trumbo is blacklisted and jailed, only to seek vindication upon release through his screenwriting talent, Trumbo the film slowly crawls inside itself to become a pretty typical biopic. Any strong political viewpoint is quickly placed aside as we watch Cranston and the film’s seasoned cast go through the motions and tropes that often accompany such a work. A small fight with the family here, a quick remorseful scene which involves those who placed scorn on the lead there. The performances are solid. The life we follow is interesting. The narrative beats are predictable.

When a film states that movies are one of the most powerful influences on people, it’s hard for someone such as myself not to smile. Despite talk of being radical, however, Trumbo never lives up to the subversive and thorny promise that it’s subject suggests. Despite the inherent drama such a scandal should provide, it never feels that dramatic. Still if you’re interested in Helen Mirren as a slimy, racist gossiper or a third act of Dean O’Gorman channeling Kirk Douglas by reacting to screens through his toughened jaw, then the film will not disappoint.

Trumbo is out on VOD Monday 13th June and DVD 20th June.