Samantha Baines: the woman of many talents. Tell us a little about [ALL] that you do. Haha, thank you. Well, I like to keep myself busy and keep challenging myself so I work in a few different areas, people are constantly mentioning my fingers to do with pies! I am a stand up comedian (award […] 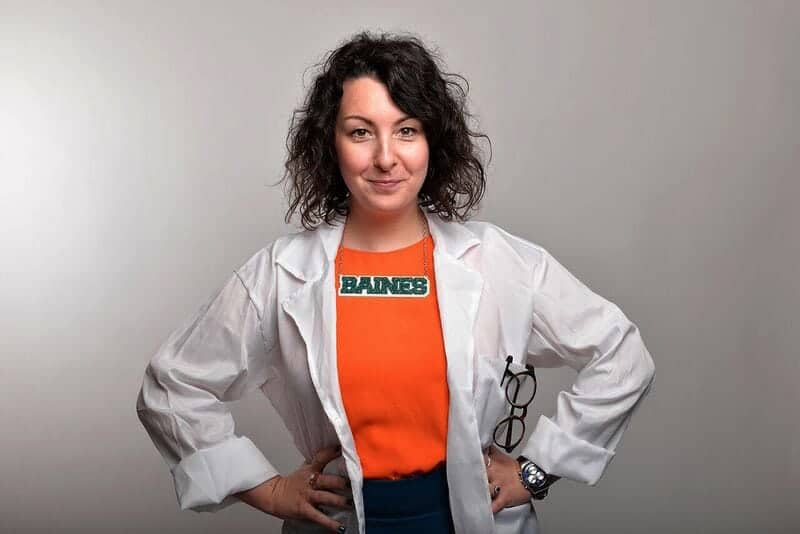 Samantha Baines: the woman of many talents. Tell us a little about [ALL] that you do.

Haha, thank you. Well, I like to keep myself busy and keep challenging myself so I work in a few different areas, people are constantly mentioning my fingers to do with pies!

I am a stand up comedian (award winning don’t ya know) and I talk about science in my comedy as I find it utterly fascinating. I like to work facts into my jokes and learn new things as I write each new show. As a stand up, I tour around the UK as well as performing every year at the Edinburgh Fringe and my show has sold out it’s Edinburgh run the last two years which is lovely. I am also an actress and I seem to play a lot of cockney women in the 1950’s! I have been lucky to be part of shows like The Crown, Call the Midwife and feature film A Royal Night Out which is a lot of fun and the 1950’s costumes are always great. I also get to act in a lot of BBC comedies with brilliant comedians that I admire like Miriam Gargoyles, Katharine Ryan and Dane Baptiste. Radio is a fairly new medium to me having come to it in the last couple of years but I love interviewing guests and guesting myself on BBC Radio 4, BBC Radio 2 and I cover present on BBC Radio London too. I also recently published my comedy poetry book POENTRY which is all about making poetry accessible and fun and promoting the fact that poetry shouldn’t just be for po-faced people!

You recently worked on Netflix’s The Crown – the most expensive show in Netflix history. What was that like? Were the premiere and after-party as awesome as I imagine them to be?

Working on The Crown was pretty amazing. To be honest I spent a lot of my time looking at the cast and crew around me and thinking “why am I here?”. It was such an honour to be part of and we had so much fun on set. I spent most of my time with Kate Phillips who played Venetia (Churchill’s secretary) and we got on brilliantly and spent most of the time in between takes giggling. I was also in rehearsals with John Lithgow (Churchill) who is such a charismatic and wonderful actor so that was a real career highlight. We had a great cast and crew screening actually which was the first time I saw my episode and the after party was raucous but actually lovely and quite low key.

Are you naturally “switched on,” as they say, or does the real Samantha Baines lie somewhere behind your public personas?

I think most people would say I am the person that you see on stage. Obviously I don’t get to write down and edit what I say in real life so my funnies might not always be as well constructed but pretty much what you see on stage is what you get in the bar afterwards too. Of course I have my chilled days at home in my pyjamas where I drink lots of tea and listen to podcasts and am not very funny but we all have those days don’t we. What can you tell us about your upcoming shows at Soho Theatre?

I love the show I am doing at Soho Theatre, if you are allowed to say that about your own creation. I just love performing it and it is about a subject close to my heart and that is celebrating amazing women. I have discovered three awesome historical women from science that I think should be household names and in this show I am sharing their stories alongside my own. There are facts and puns because I really do love a good pun (I am a UK Pun Championship Finalist 2017 – only woman ever in the final) and it’s a show that is just a pleasure to perform. This show sold out at the Edinburgh Fringe and got very nice reviews and audience feedback so hopefully it’s as enjoyable to watch as it is to perform. It’s also my first run at the Soho Theatre which I am super excited about as it’s such a lovely theatre and perfect for comedy and I have seen so many brilliant shows there myself.

So if you like women and laughing and think you’d like to learn more facts for pub quizzes and the like – then it’s definitely a show for you!

How do you prepare your content for three back-to-back shows? Is there much room for trial-and-error or do you go with guarantee laughs?

I write each show from scratch in the year I have in between the last show and the new show so come November I am getting my brain in gear for the next show. As my shows are very fact and science based I pick a topic and then do A LOT of research because as I mentioned I love a challenge! I do like the process of learning whilst I write and that’s what keeps it fresh for me and keeps me going but it does take quite a bit of time. I do lots and lots of previews before I take the shows to Edinburgh where there is lots of trial and error so it’s ready to perform properly – once in a preview I didn’t even have a lecturne or table to leave my notes on so I used an ironing board which seemed ironically perfect for a feminist show. So it’s trial and error with props too!

What are your favourite and least favourite things about stand-up?

My favourite thing about stand up is having a direct line of communication with your audience and the fact that I am so in control of the words I am saying and the way I am saying them which is obviously very different to acting.

My least favourite thing about stand up is also that I am so in control! If I act in something that ends up being awful I can blame the director or the writer (haha) where as in stand up it’s all my fault! It also gets a bit lonely gigging on your own and travelling all over the country so it’s nice to come home to my husband and my cats Victoria and Albert. Do you often get heckled? If so, how do you deal with them?

I get heckled every so often and I deal with each one differently depending on what they say and the way it is said. A lot of people heckle for attention because their parents didn’t show them enough love as children so some of them need taking down a peg or too. Some people see a woman on stage and think I’m an easy target so they need to be proven wrong. Some heckles have actually led to extra material in a show, I have a joke where I talk about finding out that you could get a vagina facial (true story) and it costs £150!! In Edinburgh one man shouted out “I’ll do you one for free” which was kind of a horrific offer but funny and I’ve added that into the joke now. If you are coming to see my show please don’t take this as an invitation to heckle, just listen and laugh please.

One last question, what show have you most recently binge watched?

Samantha Baines will be at Soho Theatre 4th – 6th December at 9.15pm, tickets are available from www.sohotheatre.com