We meet up with Harry & Chris ahead of their show at the Edinburgh fringe. What is your show about? Last year we wrote a song about Tian Tian the panda in Edinburgh Zoo trying to repopulate her species and at the end of the Fringe it was announced that she was pregnant, so we […] 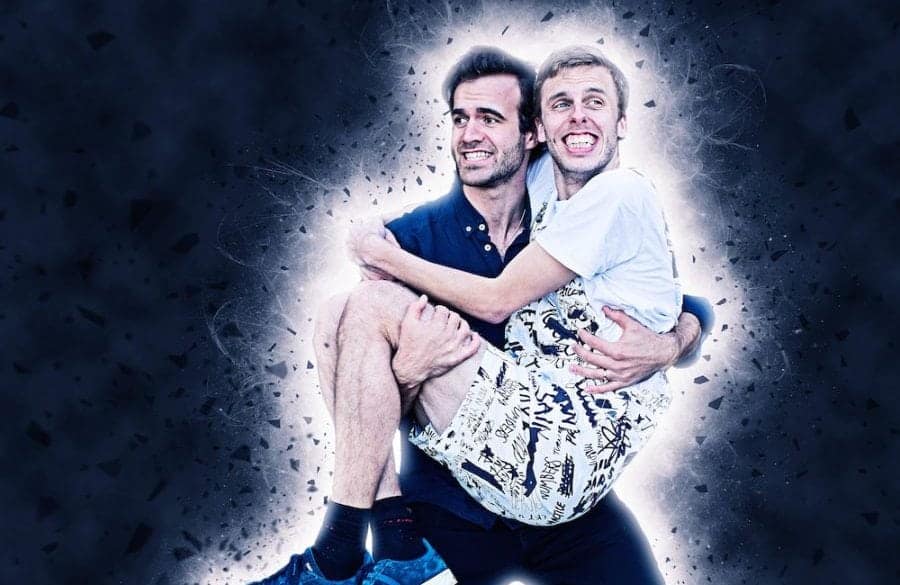 We meet up with Harry & Chris ahead of their show at the Edinburgh fringe.

Last year we wrote a song about Tian Tian the panda in Edinburgh Zoo trying to repopulate her species and at the end of the Fringe it was announced that she was pregnant, so we realised we have comedy-rap-jazz superpowers! This show is about us trying to use them to solve other problems int he works such as predicted apocalypses, the environment, and of course Teletubbies.

The ‘Splurge’ stage. When you start writing a song or a show anything is possible. With two of us that’s even more fun because one of us will have an idea and we will bounce off each other until it’s been taken to the extreme. Most first drafts of songs are about twice the length that the finished product ends up being.


Working out what the audience finds funny and what is just you. First and foremost we try and make each other laugh and hope that this is infectious, but the first time you try anything in front of a crowd that has previously only existed in your heads is both exhilarating and terrifying.

We both came from non-comedy worlds so Harry would be doing his Performance poetry and Chris would be playing Jazz! Although having a taste of the sweet sweet comedy life we might not be able to go back so we’d just spend our days reminiscing on the good times like when we filled out that London Economic Q&A in 2018…

Reusable Water Bottles and Coffee Cups! Partly because since writing a song about the environment we’ve had to become super-eco-dudes but also you never know when you’re gonna get a spare moment in-between shows and there’s something great about settling in for an hour of unknown fringe performance knowing you at least have enough liquids to get you to the other side. Harry also bought some silver-lined pants on kickstarter that you can apparently wear for a week without washing but has been too scared to fully put them to the test.

They contain more of our family and friends! We managed to sell out two shows at the Leicester square theatre on our last tour and it was amazing to see so many friendly faces in the crowd, ranging from four generations of Harry’s Family (From Grandma down to niece!) to old schoolmates’ siblings who we somehow still recognise 10 years later. We both grew up in London and even though we’re not too London-centric in terms of references in the show, we do have a song about Monopoly.

Do you have a favorite place to go when in London?

We lived together in Elephant and castle for a year, and as well as playing a lot of Pokemon Go in the grounds of the Imperial War Museum our favourite place to go was the Hub Coffee House, that was happy for us to spend most of our days off in there, and has since had us back to put on gigs!

Not so much a heckle but in a recent show we went to high 5 a member of the audience in the front row and only mid-motion did we realise she was asleep, much to the enjoyment of her friends.

We have a World cup song where we say “Brazil is pretty big and they are pretty big in football // England’s like that sentence if you take out big and put small” That H thought was genius but never really gets a reaction. C also had a song about hay fever called ‘Randy Grass’ that one audience member said they liked ‘almost as much as everything else in the show’ which was diplomacy at its finest.

Rob Auton, Flo and Joan, Rose Matafeo, Rachel Parris, Bilal Zafar, Steve Bugeja are all people we discovered in the last few years who are brilliant and have new shows, but equally the excitement is in discovering new stuff while we’re up there!

Harry & Chris perform Harry & Chris Save The World at the Edinburgh Festival Fringe from 2nd – 25th August at 2:25pm, ahead of a nationwide tour from 2nd October including London’s Leicester Square Theatre on 22nd December. . More info and tickets are available at www.harryandchris.com/