This take on Arthur Schnitzler’s sexual debacle La Ronde is a welcome venture into the sex, love and death lives of the older generation by Visible, but ultimately feels less than the sum of its parts. The seven vignettes, where each character’s story is pushed forward into the next scene for their story to conclude, […] 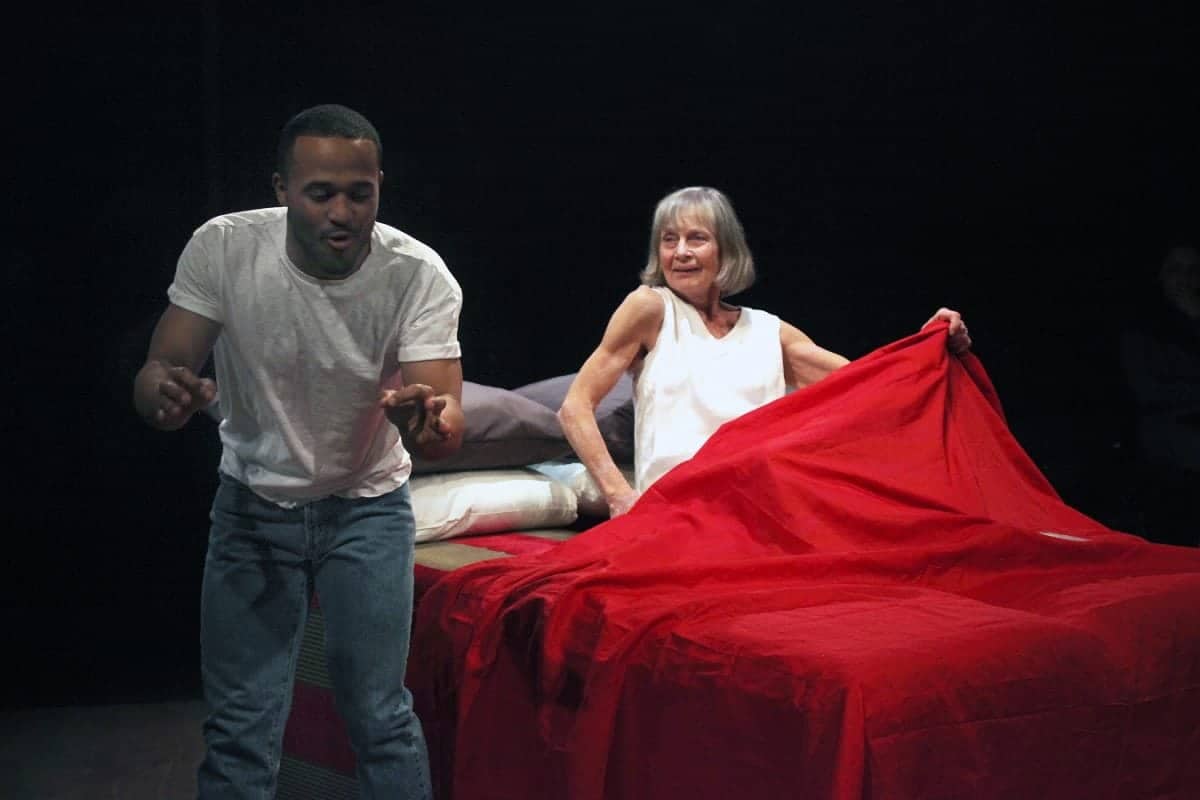 This take on Arthur Schnitzler’s sexual debacle La Ronde is a welcome venture into the sex, love and death lives of the older generation by Visible, but ultimately feels less than the sum of its parts.

The seven vignettes, where each character’s story is pushed forward into the next scene for their story to conclude, confront some traumatic home truths.

However, director Anna Ledwich takes Sonja Linden’s interconnected stories and embeds them within a circus locale. A Ring Mistress comperes (the sexual connotations are not missed by the audience) complete with a whip, aerial antics interval each vignette and a musician plays by turns on a clarinet, flute and cello in a Harlequin’s uniform.

But this means that we feel that the show is drawing back the curtain on something unmentionable and because of this certain expectations arise: that it should entertain, shock and titillate and push emotional and physical boundaries. Indeed, though we never go in too deep, the characters’ lives are displayed to us with the layers peeled back as if in a show of voyeurism for the audience’s delectation. But this secrecy and sense of subversion clashes awkwardly with the actual natural realism and walk in the park every day experiences that are portrayed in most of the vignettes. Some stories we have seen before (the younger man pleasuring the older woman for example) and this is no longer shocking to think about or confront since Hanif Kureishi’s The Mother directed by Roger Michell in 2003.

Therefore, it is possible to conclude that there is nothing uncommon or secret about the private loves and losses of the older generation (whatever this means) especially if how these loves and losses are enacted onstage are precisely what we expect to see. Perhaps the only taboo broken is the idea that talking about old age and sex and love onstage or screen or in real life is taboo if it is not newly gratuitous, explicit or titillating. If this is the point that Roundelay is trying to make- that not only should we not think that it is shocking that the older generation have and need sex and love but also that we should not portray it as such on our stages- then it succeeds and the circus act and the Ring Mistress is a gentle ruse which successfully hoodwinks the audience.

Some stories feel a little under developed, vignettes are no excuse for feeling emotionally shortchanged and if Roundelay is meant to represent the world stage there is a narrow range of gender identities, classes and orientations on display.

Roundelay also does not explore the inequality between the sexes quite enough, although they are implicit within some of the stories.

There are some compelling performances from the ensemble though, not least from Annie Firbank who fully embodies the shaky, gentle and stoic Evelyn even though she remains horizontal for most of her time onstage.

Anna Simpson excels in her aerial antics although it is harder to understand how her movements relate to the production as a whole. It is nice also, in the La Ronde tradition, to follow each character’s story to its conclusion and understand their interconnectivity with each other.

Overall the whole production feels a bit like what it might be like to hang out with a gentler elderly Doris Lessing smoking weed on good day, but perhaps this is no bad thing.