When the weather reaches over 30 degrees, all plays should have to incorporate an air conditioning unit into their set by law. Fortunately, HIR has come prepared, and sitting in the auditorium of the Bush Theatre is a sweet, blessed relief after the persistent heat wave raging outside. In the middle of the auditorium is […] 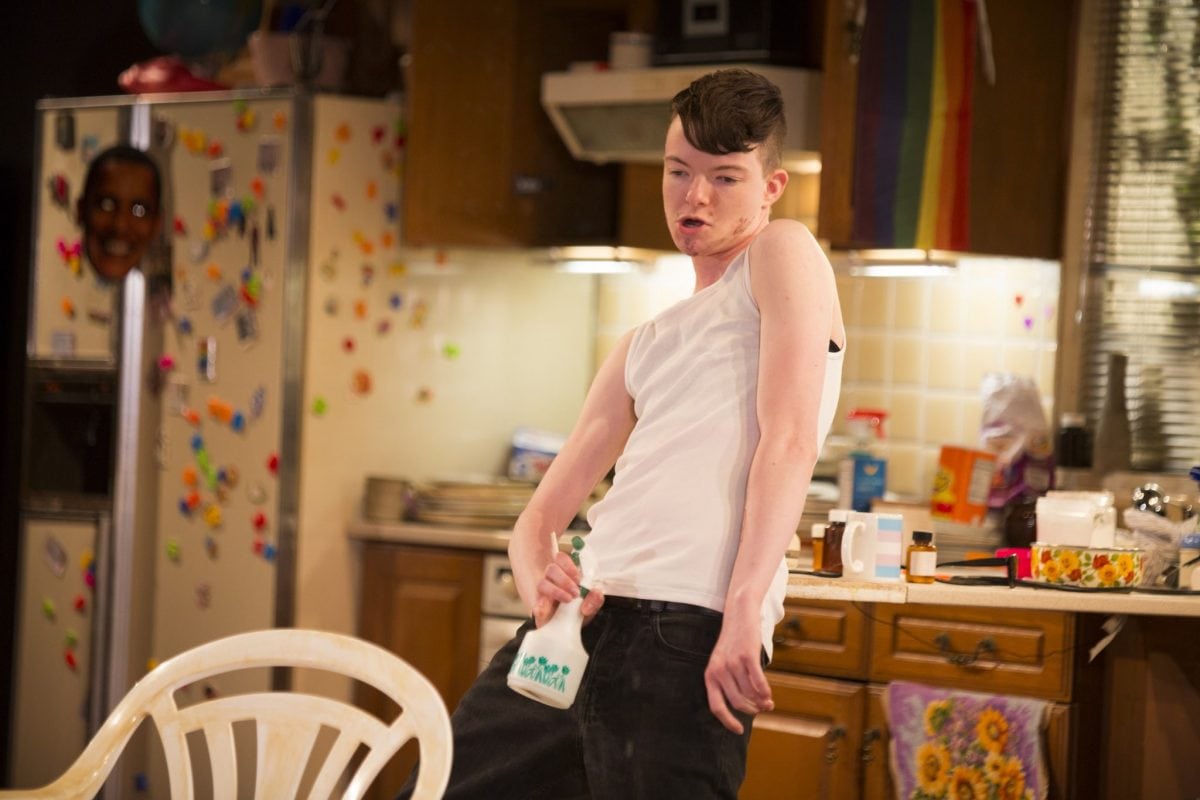 When the weather reaches over 30 degrees, all plays should have to incorporate an air conditioning unit into their set by law. Fortunately, HIR has come prepared, and sitting in the auditorium of the Bush Theatre is a sweet, blessed relief after the persistent heat wave raging outside.

In the middle of the auditorium is a kitchen, with the audience sitting along each of the two long sides. Both edges of the stage are littered with laundry. Chairs are stacked against the front door, and the whole scene looks distinctly American, and also like a clown has exploded. Multi-coloured foil letters and flags are looped over big windows with closed blinds. Paisley curtains flank the frames, and the pink concrete beams overhead are half-destroyed – the very structure of the house impaired. And a man in a nightie and a rainbow wig sits in the middle of the room. HIR the play is about just that – gender politics, gender, and politics. A man is dishonourably discharged from war, and returns to his family home to discover his father has had a stroke and is dressed in women’s clothing, his mother has decided to stop cleaning as a stance against the patriarchy, and his sister has become his gender neutral but trans masculine sibling. Confusion ensues.

AND IT WAS MAINLY BECAUSE OF ALL THE SHOUTING! FROM THE WORD GO EVERYONE IS TURNED UP TO 11! AHHHHHHH! Okay! We’ve got it now! Let’s rein in the caps lock please (I ooked through the playbook – and there really is a lot of caps lock). There’s nowhere to go from maximum blast, so nothing that happens after the first five minutes comes as a surprise. “Oh, there’s another wacky development, and now they’re all arguing again.”

Like listening to anyone fighting for any amount of time, HIR is a bit exhausting. The characters barely have a moment to say a nice word to each other before the hullabaloo starts up again, which makes it difficult to connect to any character on any level other than tired frustration.

On the upside, I now have more sympathy for my parents about 20 years ago, when my brother and I would bicker incessantly in the back of the car and it drove them almost irredeemably insane.