An exclusive listen to Problem - The first single from The Dreadnoughts' forthcoming album Roll & Go. 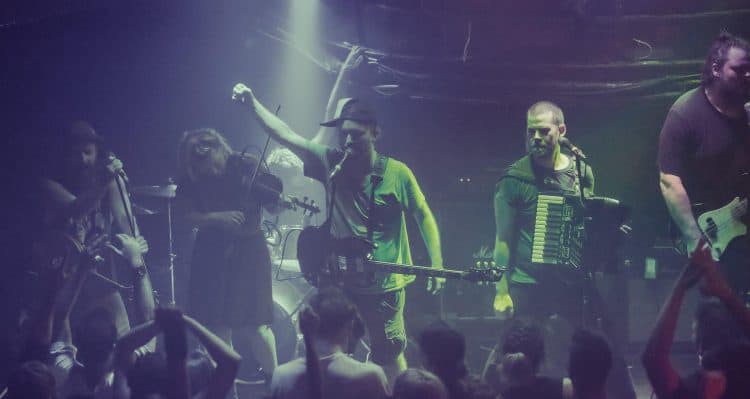 The Dreadnoughts have just announced their new single Problem to support the release of their upcoming full length out June 24th on Stomp Records.

With over 80 million streams on Spotify alone, the band have been billed as one of the biggest acts you’ve never heard of.

Formed in the dirty and violent backrooms of Vancouver’s infamous Ivanhoe Hotel back in 2006, they’ve been on a cider-fueled bender across the globe bringing their furious brand of celtic polka punk klezmer mayhem to an ever-growing legion of obsessed fans.

Now their new album, ‘Roll & Go’, is set to hit the shelves after a lengthy recording process through the pandemic.

With band members based in New York, Vancouver, London, and Edmonton, the band decided to record in the unlikely location of Norwalk, Connecticut at the Factory Underground Studios.

After ducking and weaving through countless travel restrictions, the Dreadnoughts managed to learn, record and mix an entire album in nine days. It was a harrowing, intense experience, one made even more intense by the fact that six guest musicians were recording their own parts in six different cities around the world, and that all of this had to be coordinated with virtually no time. But they got it done!

The result is Roll & Go: the Dreadnoughts fifth, and possibly finest, studio album.

Reflecting on the meaning behind the advance single Problem, Smyth remarks, “This song is about our love-hate-mostly-love-but-sometimes-really-hate relationship with Poland, a country we’ve toured many times.

“In particular, it’s about a winter tour we did where everything just kept breaking and going wrong, and we kept fighting it and raging against it until we realized that this was normal in Poland, and that you needed to just do what everyone else did: sit back, have a beer and a smoke, and say “to hell with it.”

“The Poles are amazing at this, it’s actually a really healthy attitude to have in a lot of situations. The song’s title comes from a word that means the same in English and Polish, and we quickly realized that we were going to hear it from our tour manager (who spoke no English) about 18 times a day. ‘Ah…’ he would say, his face scrunching up and worry-creasing his forehead… ‘Problem’.”