An army of sand artists have created the world’s largest-ever land art project – by carving intricate Hindu symbols into beaches across the globe. The attempt began on September 2 when artist Julian Richardson carved a 400ft-wide mosaic into Brean beach in Somerset. It took seven hours for Julian and his six helpers to create […] 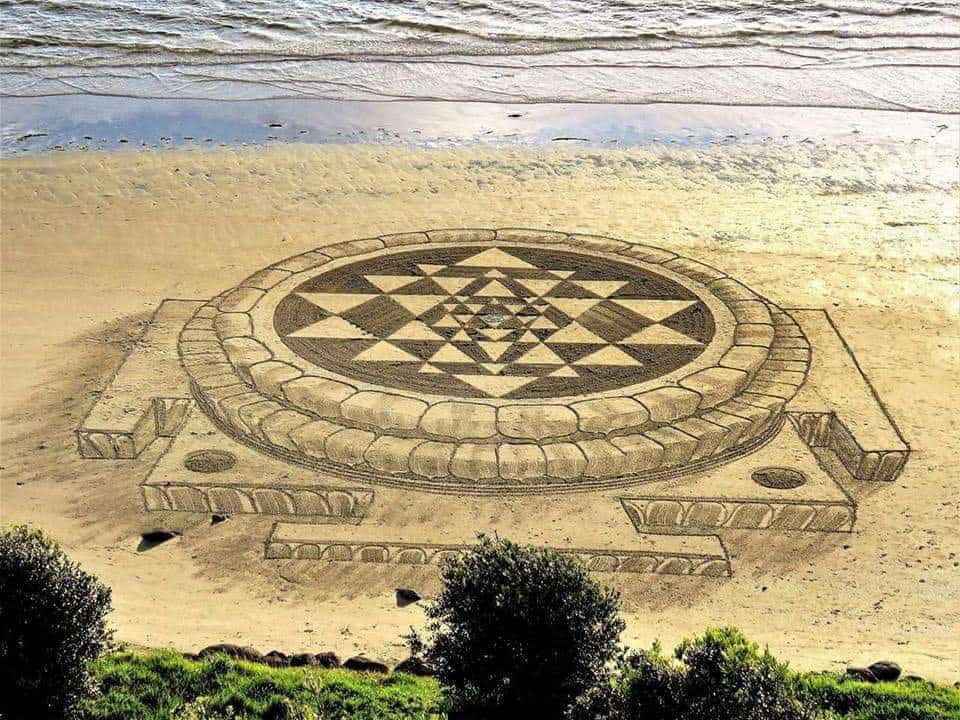 An army of sand artists have created the world’s largest-ever land art project – by carving intricate Hindu symbols into beaches across the globe.

The attempt began on September 2 when artist Julian Richardson carved a 400ft-wide mosaic into Brean beach in Somerset.

It took seven hours for Julian and his six helpers to create the enormous figure of the ‘Sri Yantra’ – an ancient symbol representing balance between opposing forces.

Since then a further 15 artists have created similar geometric designs in countries such as Australia, France, New Zealand and the US.

Each has a personal touch, but all the drawings will include the ‘Shiva and Shakti’ symbols, representing consciousness and energy, and the ‘Bindu’ middle point where they intersect.

Ceremonies held in the middle of the intricate pattern involve everything from meditation and yoga to dance and prayers.

The aim of the Sri Yantra Land Art Project is to promote global peace by helping to “create a harmonising affect and serve humanity in these troubling times”.

Project coordinator Khi Deva said: “In these troubling times of great disturbance and change happening around the planet, the Sri Yantra symbolises the balance needed to restore right relationship with the planet.”\

“It is a magnificent symbol of extraordinary beauty which can inspire awe and wonder.

“The idea is to offer this symbol with the intent that it may help to create a harmonising affect and serve humanity in these troubling times.

“This is an exciting project, not only for the artists and helpers involved, but also for humanity as a whole.”

The intricate pattern is made up of 43 triangles surrounded by circular figures all sitting inside an enormous square.

Temporary by nature, the drawings – which take weeks to plan and many people to execute – are then washed away by the tide.

One lasted just two minutes before it dissolved.

Artists have also battled sudden downpours of torrential rain to carve the figures into the sand, and the Somerset team relied on string and tape to measure out the dimensions.

Sean Corcoran, from Ireland, created his 300ft-wide Yantra at Stradbally Cove on The Copper Coast in Waterford.

It took his team six hours to complete the figure using GPS-guided rovers and 16 satellites.

Mount Maunganui in New Zealand was the setting for Jamie Harkins’ 3D Yantra – which was washed away in just two minutes.

Emilie Vincent, the only solo female artist taking part in the project, drew the ancient figure at the Saint-Palais-sur-Mer beach in La Rochelle, France.

Mr Dike believes the Sri Yantra project could affect the environment and human consciousness at a local and global level.

“Things in North Korea could change,” he said.

“It is to see what effect it has across the world.”