Following the murder of George Floyd, classic protest songs have received a new spike in popularity. 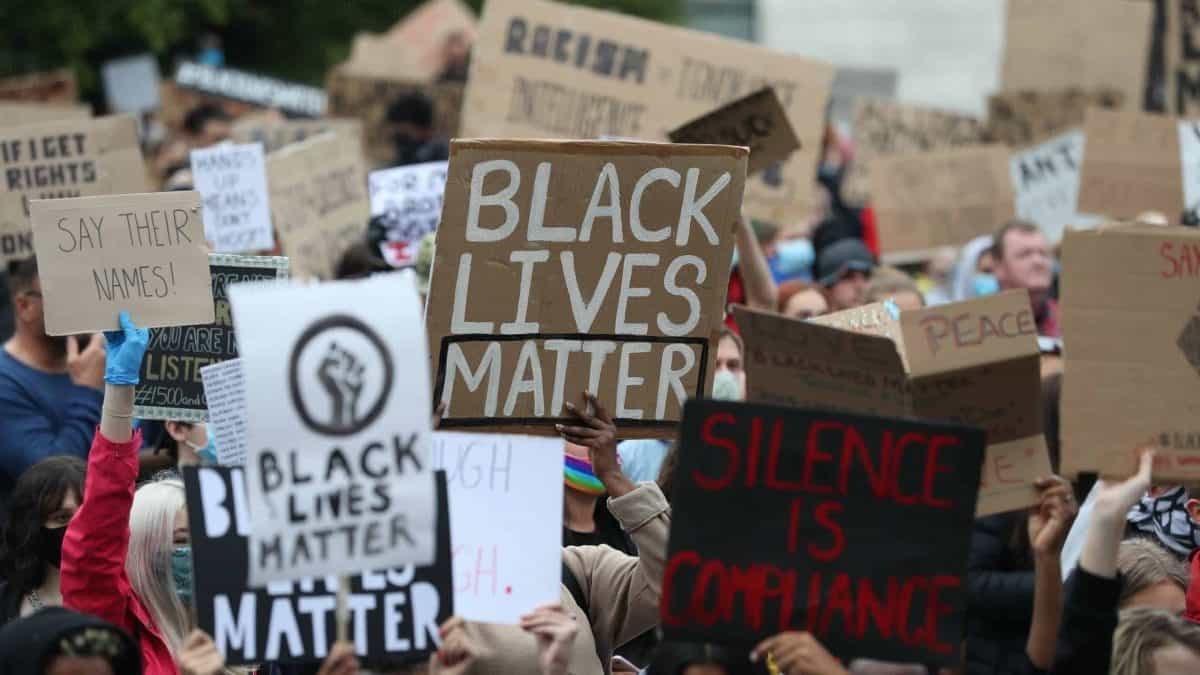 To many, the term ‘protest song’ conjures images of acoustic guitars, unkempt facial hair, and the 1960s. Defined as “a song that expresses disapproval, usually about a political subject”, by the Cambridge English Dictionary, protest songs have been written and performed for centuries. Galvanising individuals to seek justice, music has been a central peg in social justice movements throughout history, with protest songs used to send social messages and to make positive change, typically inspired by specific movements for social change or current events.

Some of history’s most poignant, timeless protest songs are those performed by soul or hip-hop musicians, nonetheless. In a 1999 article, TIME Magazine named Billie Holiday’s ‘Strange Fruit’ “Best Song of the Century”, and for good reason – a haunting rendition of Jewish-American writer Abel Meeropol’s poem in protest of lynchings in America. To this day, Marvin Gaye’s entire ‘What’s Going On?’ album remains not just one of the most ground breaking politically-charged albums of all-time, but one of the most important albums ever written. Regardless of genre or theme. In 2020, Public Enemy’s 1989 single, ‘Fight The Power’ (recorded as the soundtrack for Spike Lee’s ‘Do The Right Thing’, laced with themes of inner city racism and police brutality) sounds as fresh as it did on release, but it should go without saying that N.W.A’s ‘Fuck Tha Police’ is one of the most fitting to current events.

A song written about excessive force used by American police officers, specifically targeting Black males, ‘Fuck Tha Police’ was a lead song from N.W.A.’s debut album, ‘Straight Outta Compton’, released in 1988. At the time of release, the group’s polemic put Compton on the map, quickly spreading worldwide, eventually provoking the FBI to send a letter of disapproval to N.W.A.’s record company. “Fuck the police comin’ straight from the underground,” yells Ice Cube. “A young n***a got it bad ‘cause I’m brown / And not the other colour, so police think / They have the authority to kill a minority”.

Alas, more than 30 years on, the lyrical themes raised are still omnipresent.

On Monday 25th May, police were called to a grocery store in Minneapolis, Minnesota, following reports of a customer trying to pass a potentially counterfeit bill. The suspect, George Floyd – an un-armed African-American man – was shown to be compliant on the store’s surveillance footage, though was handcuffed and led away. Mobile phone footage later surfaced, showing a white police officer, Derek Chauvin, pressing his knee to Floyd’s neck for a total of eight minutes and 46 seconds. Two other officers, Thomas Lane and J Alexander Jueng, held Floyd down, while a fourth, Tou Thao, stood guard. Echoing the 2014 police killing of Eric Garner, the footage showed Floyd repeatedly saying, “I can’t breathe”, and “I’m about to die”. Limp and unresponsive, George Floyd was taken to a local hospital, where he was pronounced dead. The official autopsy found Floyd died of cardiopulmonary arrest, caused by subdual and restraint.

Worldwide protests have since taken place, predominantly in the United States, but also here in the UK, with people galvanised to rise up; to take action in support of George Floyd and Black Lives Matter, fighting for justice and police reform. These protests have, in turn, been met with yet more police brutality, including but not limited to the deployment of tear gas and rubber bullets. On Sunday 7th March, protests in Seattle were disrupted by an (at the time of writing) unnamed man who ploughed his car into a crowd of protestors, before shooting a demonstrator.

The events that took place on 25th May, at the hands of four Minneapolis police officers, were sickening – a terrifying sign-of-the-times – but not particularly surprising considering the United States’ long history of excessive force used against African-Americans.

Speaking on Apple Music’s Young Money Radio, on Friday 29th May, former N.W.A. member Dr Dre said: “And it felt like that cop had his knee on all of our necks, meaning Black men. And yeah, it’s extremely painful. It’s extremely painful because it keeps going on. It continues to go on and it’s like, ‘What can we do? Or what do we need to do to make this thing stop? What is supposed to happen to make this thing stop? It has to stop. What the… is supposed to happen?’”

Ice Cube was scheduled to appear on Good Morning America on Thursday 28th May to promote his new film, ‘The High Note’, but pulled-out following the murder of George Floyd. In an early morning tweet he wrote: “I apologize to everyone expecting to see me on Good Morning America today, but after the events in Minnesota with George Floyd I’m in no mood to tell America, good morning.”

Following George Floyd’s death, a small number of new protest songs have been released, though it’s a series of older songs that have received the greatest surge in popularity, experiencing a huge spike in streams. According to data published by Alpha Data, the analytics provider that powers the Rolling Stone charts, ‘Fuck Tha Police’ saw a 272 percent increase in on-demand audio streams from 27th May to 1st June, compared to the five days before. On just the Sunday and Monday, the song was streamed over 765,000 times. An astonishing feat for a 32-year-old song that sounds as though it could have been written this week.

Other songs with anti-racism and anti-police themes to gain spikes in traction over those five days include Public Enemy’s ‘Fight The Power’ (+89 percent), James Brown’s ‘Say It Loud – I’m Black And I’m Proud’ (+455 percent), and Nina Simone’s ‘I Wish I Knew How It Would Feel to Be Free’ (+34 percent). More recent releases to have received a spike in streams include Beyoncé and Kendrick Lamar’s ‘Freedom’, Kendrick Lamar’s ‘Alright’ – viewed as a modern civil rights anthem, and Childish Gambino’s ‘This is America’.

This isn’t the first instance in which ‘Fuck Tha Police’ has seen a resurgence, nonetheless. The song provided a snapshot of the tension between police and civilians in Los Angeles on release, which later boiled over into rioting following the acquittal of the four officers involved in the beating of Rodney King. Amid 2015 protests over the shooting of Michael Brown, in Ferguson, the song also experienced another wave of popularity.

In The Story of ‘Fuck Tha Police’ – A Noisey Film, produced by VICE in 2015, Ice Cube said: “Fuck Tha Police is something that everybody, at some point, wants to say. In every nook and cranny [of] every country, people have a problem with authority, so the song is always going to have a place. A song that people feel like is their anthem. And as long as we’ve got this problem, the song is gonna be relevant.”

“As long as we’ve got this problem, the song is gonna be relevant.”

A posthumous single released in 1998, 2Pac’s ‘Changes’ has also resurfaced as an anti-police-brutality anthem, having made its way to number 25 on the iTunes Top 100 chart, as of 4th June. Considered one of the most socially conscious lyricists of all time, Tupac Shakur covers a variety of issues in ‘Changes’, originally recorded in 1992. Using many lines from other unreleased recordings, the song also features an anthemic chorus, which samples Bruce Hornsbuy and the Range’s ‘The Way It Is’, re-recorded and sung by Talent. Speaking on police brutality that’s been present in America for over 20 years, 2pac raps: “Cops give a damn about a negro / Pull the trigger, kill a n***a, he’s a hero.”

Also appearing on Lil Wayne’s Young Money Radio last week, Snoop Dogg was asked about the impact of 2Pac in 2020, following the death of George Floyd, widespread protests, and ‘Changes’’ spike in streams.

“It’s more relevant than ever, and when he spoke it a lot of people looked at him crazy because he had a militant mind,” Snoop Dogg said. “He had a mind that was a head of his time.”

Alongside the themes of drugs, poverty, racism and police brutality in ‘Changes’, Shakur also conveys a potent message. Change can actually occur, but only if people unite to fight injustices. Together we can make true changes.

“We gotta make a change / It’s time for us as a people to start makin’ some changes,” raps 2Pac. “Let’s change the way we treat each other / You see the old way wasn’t workin’ / So it’s on us to do what we gotta do to survive”.

RELATED: Policing is about to go through one of the most testing periods in its history