Venue: Roundhouse, Camden Date: 12th – 15th May 2018 Writer: Megan White @whatmegandid This year was the second edition of Frank Turner’s Lost Evenings at Camden’s Roundhouse – a four night residency at the stunning 1,700-capacity venue, surrounded by a medley of supporting events at The Monarch, Dingwalls and other venues dotted along Chalk Farm […]

This year was the second edition of Frank Turner’s Lost Evenings at Camden’s Roundhouse – a four night residency at the stunning 1,700-capacity venue, surrounded by a medley of supporting events at The Monarch, Dingwalls and other venues dotted along Chalk Farm Road.

The first night of the festival, entitled New and Old, was kicked off in fine fashion by the Sleeping Souls. Frank burst onto the stage shortly afterwards – tripping over guitarist Ben Lloyd’s guitar cable onto his face.

Despite the rocky start, Frank laughed it off and the band took it in their stride, launching into new album track ‘1933’, followed by Positive Songs for Negative People favourites ‘Get Better’ and ‘The Next Storm’.

The crowd were immediately in the palm of Frank’s charismatic hands, hurling themselves into circle pits and moshing through a hit-laden set spanning six of his seven albums. Even during his solo section in the middle of the show, the audience screamed along to every word of ‘Get It Right’, ‘Tattoos’ (how apt) and ‘Demons’.

Highlights included Frank’s ode to late friend Lex Burrows ‘Long Live The Queen’ while her two children were in the audience, and the frontman hurling himself into the crowd before selecting a lucky young woman to dance with during one of the quieter moments of penultimate song ‘Four Simple Words’.

Incredibly, Turner, who informs the crowd that this is his 2,175th show, manages to maintain enough energy to throw himself around the stage and into the crowd for the set’s entirety – and at a solid two-hours, that’s quite a feat.

The second night of the festival celebrated the tenth anniversary of cult favourite Love Ire & Song. Kicking off with a heart wrenching solo piano rendition of ‘Jet Lag’, Turner took the crowd on an emotional journey through one of his most beloved albums – although not in running order, as “that would be boring and predictable”. 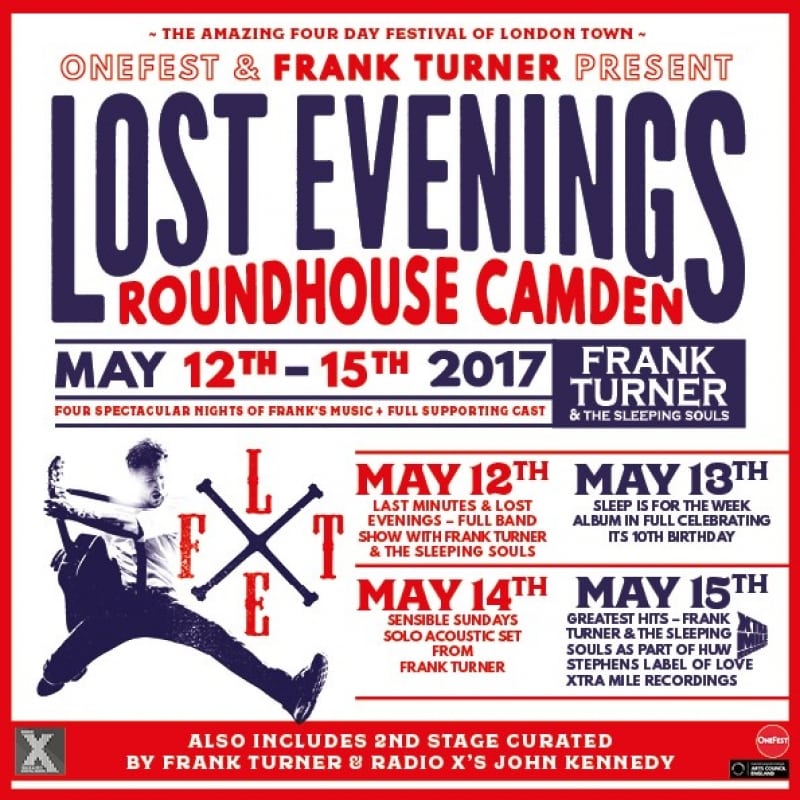 He even delved further into his back catalogue, pulling out rarities including ‘Old Flames’, which he sang as a duet with support act Emily Barker, but which was originally meant to be recorded with Florence Welch, who frequented north London haunt Nambucca with Frank in the mid-noughties.

Fans were as overjoyed to hear rarely-aired tracks like ‘Front Crawl’, ‘Hold Your Tongue’ and ‘The District Sleeps’ as they were to punch the air to mainstays ‘Photosynthesis’, proving Turner’s enduring appeal.

This reviewer was sadly unable to attend Sensible Sundays, but judging by online reactions, fans were just as pleased with the setlist as they were with the other nights, despite its all-acoustic set-up.

Frank also hosted an insightful talk about Love Ire and Song on Sunday, alongside Ben Lloyd, discussing the album’s recording process, what he would improve if he made it again, and how he felt playing it to ten times as many people as the first time he toured it.

Smashing their way through ‘I Still Believe’ and live rarities ‘Plain Sailing Weather’ and ‘Vital Signs’, it was clear that the previous three nights had done little to dent the band’s infectious live energy and camaraderie.

Ending in a shower of pyrotechnics, the weekend proved that Turner, after seven albums, still has the energy and allure to bring almost 7,000 people to Camden for a weekend of singalongs, circle pits and friendship.