“Go fuck yourself” Sven Ratzke says, kindly. Ratzke has cleverly managed to be both Dutch and German, and therefore merrily walks the line of being very easy to chat to whilst taking absolutely no nonsense from anyone at any time. Ratzke has been touring the world as the creator and star of Starman for the […] 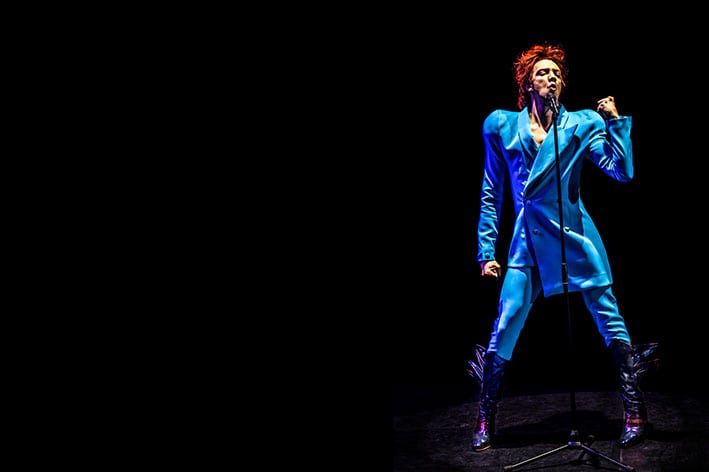 “Go fuck yourself” Sven Ratzke says, kindly. Ratzke has cleverly managed to be both Dutch and German, and therefore merrily walks the line of being very easy to chat to whilst taking absolutely no nonsense from anyone at any time. Ratzke has been touring the world as the creator and star of Starman for the last two years, and in June it’s finally coming to London.

At this juncture a writer will normally tell you what their interviewee is wearing, how nervously they’re fiddling with their fingers, and – if they’re in a fancy restaurant – what food they’re pretending to eat and how expensive it was. I’m on the phone with Ratzke; he’s in his apartment in Amsterdam, and I imagine him lying on a chase longue in fabulous yet hilariously tight trousers. Like a sexy, leggy, super villain with great hair. This is all conjecture, and I am in a basement that smells like poo. I’m just setting the scene for you.

In the run up to Starman’s run at the London Wonderground Spiegel Tent in June, I caught up Ratzke about his production process, the Fringe festival, and how we can all be heroes. Oh, and about David Bowie (but it’s definitely not a tribute show, so don’t even think about it).

Okay Sven – give us a quick rundown of the show.

Starman is a show where I am super inspired by the universe and the work of David Bowie – and then I put my own universe into that. I’ve taken the songs of Bowie and made them my own with new arrangements, and in between the songs there’s a bizarre story, which has been described by some as being like an acid dream.

We go from London to LA to New York to Berlin, and we meet characters and personalities who have something to do with Bowie. It’s a fun show, it’s a crazy show, and it’s a very visual show. There’s interaction and storytelling, and it’s all built around the brilliant song writing of Bowie. But it’s not a tribute show.

So the story in the show opens in London – but this is the first time the show has actually come here?

Yeah… So is it quite exciting… No! It’s a great acid test. I love to go to the festival but you do see things and you think, “Okay this is great here, but I don’t know how transferrable it is.” Also I’m super cynical because it’s my job. But it must be exciting to be bringing the show to London, considering Bowie grew up here?

It’s quite daunting bringing it to London because of that. Starman was sold out at the fringe and it did really well, but there’s always one person per evening who’s like “This is not Bowie, you don’t even look like him, you should be ashamed.”

It’s not about that. You can go and see an ordinary tribute show and it will be boring. Bowie was a genius because he transformed and changed his own work as he went along. And that’s what we’ve done.

It doesn’t sound like anything I’ve seen really, which is almost the biggest tribute to Bowie you can give – to do something innovative.

Exactly. When we did the show April last year in New York, some of Bowie’s relatives came to see it and they said, “He would’ve loved this show because it’s so crazy, so wild, and so different.” We had Bowie’s personal blessing to do the show. But it takes a lot of courage to take things you love and that have inspired you and change them up a little bit.

If there’s one David Bowie song that’s your spirit song, what would that be?

Everyone asks me this question…

What can I say, I like to be original.

I have to say – my favourite is Heroes. It truly touches people all around the globe; it’s universal. Maybe it’s even become a political thing now. These are strange times. We have these complete idiots in power and you really have to stand up, stand out and speak up. And you can be a hero – just for one day. I really like that; it brings people together. It’s inspiring! Just one day, that’s all you have to do, and you will make a difference. What’s a day in the life of Sven Ratzke like?

Honestly, a little bit chaotic. All over my apartment the whole floor is just paper, which is covered with ideas fragments of songs, and full songs. It’s a puzzle, and then you have to put at all together. With Starman it really started with the music, although I’d already done a lot of research, and I’d read all the books and watched all the documentaries.

So even if something seems to be chaotic it’s actually grounded in a lot of knowledge and expertise?

Sometimes it takes a while to bake the cake.  I couldn’t have made the show in a week, but some things come to you in ten minutes. And it’s so important to get the show on stage. I start with maybe 20 or 25 previews before the premiere. I improvise a lot, and a lot of the really good storytelling can only come to life on stage.

But we have already cracked that by the time we come to London so don’t worry.

Yeah! So ready. We’re not even thinking about that stuff anymore. It’s part of your DNA now.

I’m so afraid now because of your questions! “Are you sure Londoners are going to like it?” It’s made now! That’s it!

You’re starting at the beginning of June, right?

I’m sure it is, I’m just here to inspire you with fear.