Eventually we learn at least three things over the course of a long and frequently lively life – our wit and charm is not enhanced by copious drinking no matter what we think at the time, the pain of a loss lasts longer than the thrill of a win, and don’t get your hopes up. […] 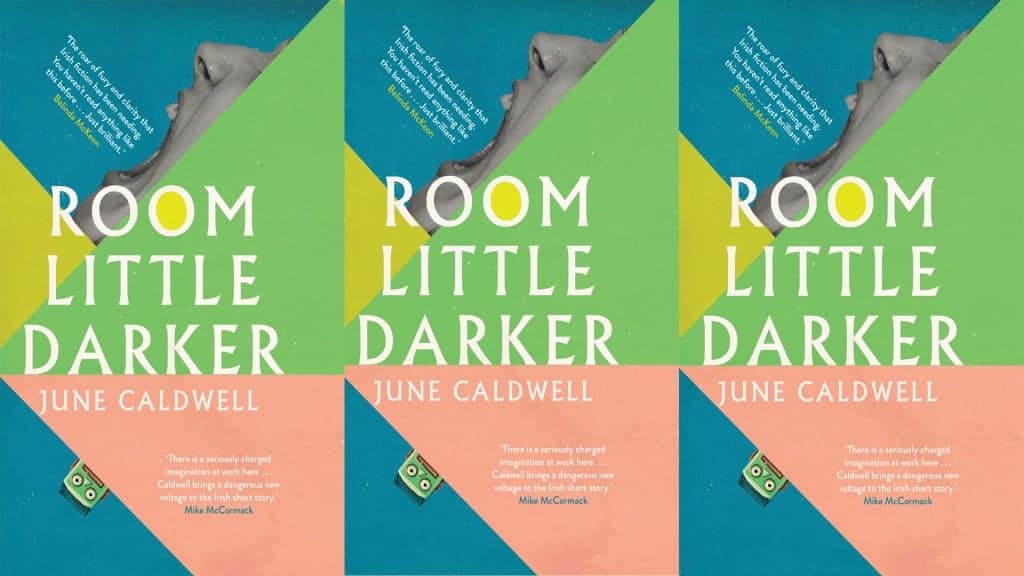 Eventually we learn at least three things over the course of a long and frequently lively life – our wit and charm is not enhanced by copious drinking no matter what we think at the time, the pain of a loss lasts longer than the thrill of a win, and don’t get your hopes up. There are more of course (the two things in life everyone you know thinks they know how to do better than you know how to do are how to raise your children and how to train your dog) but let’s stick with those three for now as in one way or another each applies to one of the finest reading experiences I have enjoyed in absolute ages, the Irish writer June Caldwell’s first collection of brilliant, soul-ripping short stories Room Little Darker.

Let’s deal with that expectation thingy first, shall we? When I first moved back to Ireland from the UK at the end of 2014 (I’ve since returned but really, I’m not on the lam) I plunged back in to reading new Irish writers with the same gusto with which a religious convert takes Communion. In that holy spirit I ordered for review an anthology titled A Long Gaze Back: An Anthology of Irish Women Writers. The book – and it is very well worth your time with a reward of pleasure – follows an historical timeline, so there near the end was a story by June Caldwell, ‘SOMAT.’ It is included in Room Little Darker having been nominated for several prizes which it really should have won. ‘SOMAT’ is written from the point of view of a foetus whose mother is de facto dead of a stroke, yet Ireland’s strange and complicated relationship with death, dying, maternity and (three Hail Marys and five Our Fathers later) abortion does not allow the mother to rest in peace, her electrical cord to the world must be kept in its socket.

I instantly became a Caldwell fan. Not so much because of the topic; dear Lord there are enough boring pedants on either side of any religious/judicial argument, but because of her prose. Words, phrases, descriptions, metaphors, all exploded off the page like an occupants of a beehive scattering from the blow of a hard-swung hurley.

And so, I have been waiting. I have been waiting for a Caldwell collection because, well gosh golly this was going to be worth it! Now, to be fair and honest, I did worry a bit as outside of a rare few collections of single author short story collections there is usually a clanger or two. You know – filler. What the micro salad is to a fine dining plate of a three ounce cut of beef shadowed by razzmatazz under a wine sauce, such are the filler short stories in most collections. Pro Tip: Filler short stories usually involve robots. When a non-science fiction writer uses robots in a story that is usually (not always, q.v.) a sign of a desperate, ‘Oh fuck, I only have eleven stories and the publisher needs twelve.’ Moving right along, when Ms Caldwell’s publisher, New Island Books, alerted me that they were releasing Room Little Darker I had three reactions. One, Hurrah! Two, send it to me. And three, please let it be somewhere near as good as I want it to be.

First two reactions were met; the third failed miserably. (cue a Simon Cowell sized pause) Room Little Darker exceeded my expectations and darling, that never ever happens to me.

Those of you who have followed me and my reviews as I have worked my up the ziggurat of publications know, I simply love the late Dorothy Parker. Show me a woman with strong, even swaggering opinions and the writing skills to make them pop and, well, not to put to fine a point on it but as the District Attorney Dan Fielding said in a memorable episode of Taxi, ‘I am your love slave!’

I state defensively that the above is not a sexist opinion. Having studied, interviewed and written about the misogyny buried so deeply in all the history of our world’s cultures (yes all, yes always) it is a near-infinitely more difficult task for a woman in 2017 to speak plainly about the world than it is for a man to ‘mansplain’ it. Throw another irony in the fire would you? It’s cold out tonight.

I can’t tell you what Parker would have been writing if she was still alive in 2017 and I doubt if she could have either. Yet, I can certainly hope that her sword of wit and pain of shield would be applied as well to our time as June Caldwell uses her own weapons of battle.

What I love about June Caldwell’s stories are two things, one structural and one more … how should I phrase it? … psychic perhaps. Structurally, any fool can hit a metaphor. Really, it’s not all that difficult. ‘All the world’s a stage,’ ‘I am the good shepherd,’ or George Orwell’s suggestion on advertising, ‘Advertising is the rattling of a stick inside a swill bucket.’ However, it requires a leap forward in skill to write something such as the lead story in Room Little Darker, ‘An Account of Some Strange Happenings on Botanic Road’ and disguise the absence of a dementia-addled male parent who wasn’t much there in the first place within shock observances of the female narrator seeing Him in the mirror. Metaphors contained within a metaphor; there’s writing for you. Sound far-fetched? Have you ever looked into the mirror and seen your Mom or Dad’s face smiling or grimacing back? Yeah, me too. And then there is the pain of loss. Parker skewered it in ‘Big Blonde.’ Caldwell is more forensic yet equally not at all objective. In a story such as ‘The Implant’ the break-up of a twelve years’ involved couple are described within the clipped tones of a journal describing the woman’s blood-clotted rejection of an abortion inducement. It all ends, foetus and relationship alike , with ‘ABORT ABORT ABORT.’ Sometimes we just have to cut away the pain and trust that the scars will heel.

What Caldwell gets above everything is misogyny; even better than Parker did. Take a short story like ‘The Glens of Antrim’, written as a series of back and forths between two lovers well after the fact. He looks back without anger, sees only good times! New experiences! Three ways baby, three fucking ways! She … sees degradation.

Added to that, there is a recognition (although acceptance may be only begrudging) of the dark and rock-field waters that men must traverse. Thus we have Caldwell’s ‘BoyBot’ about a robot (q.v. earlier) developed so addled men will leave kids alone.

The pain of loss. I don’t know June Caldwell’s life and I would consider it rude to ask. But – by the soul of sweating Jesus, this human has felt pain. She has been degraded, literally felt inhuman, reduced to – literally – abused pet status in shattering – shattering! – stories such as ‘Imp of the Perverse’ or how the character Rosie Dew views her abuse in the aforementioned ‘The Glens of Antrim.’

And indeed, Caldwell gets the false escapism and the false economy of drugs in stories drawn from the mean streets of Dublin such as ‘Dubstopia’, or slightly more fantastically the self-described ‘The Man Who Lived in a Tree.’ There is no room in this world for the sensitive, so you may as well get fucked up. Hey, it’s a motto innit?

I haven’t done June Caldwell justice in this review – I feel that, I know that. There is no better writer of soul-stopping, confrontational prose working in the English language today. Perhaps this entire review should have just been that previous sentence. Read, feel, care, consider, care – June Caldwell will lead you there.