From exotic frogs to a jumping fox, all these pictures are winners and runners up in an international photography competition. British snapper Michelle Howell grabbed the top prize with this pic of a colourful Argentinian Ornate Horned Frog. She fought off more than 530 other snappers to win the Society of International Nature and Wildlife […] 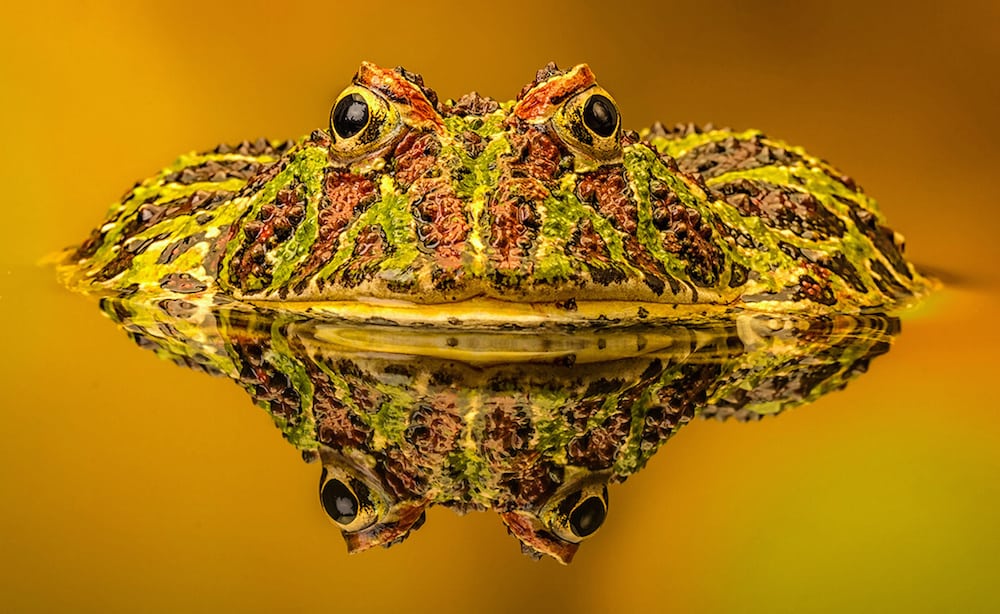 From exotic frogs to a jumping fox, all these pictures are winners and runners up in an international photography competition.

She fought off more than 530 other snappers to win the Society of International Nature and Wildlife Photographers’ Creatures Great and Small competition. Former cop Michelle, from Flockton, Yorkshire said: “After retiring from West Yorkshire Police and entering the sailing business, I renewed my previous passion for photography.

“The sailing business has allowed me to travel extensively throughout the world and I have used those opportunities to photograph the world around me.

“I am particularly interested in nature and macro photography. She also had a picture of a pair of Peacock Tree frogs highly commended.

In second place was Sheri Emerson from Newfoundland, Canada with her lovely shot of a charging Rhino surrounded by dust.

Third place went to another Brit, Stuart Walker, 43, Saffron Walden, Essex with his colourful shot of a bee buzzing on some lavender. Stuart said: “After sitting for 30 minutes in front of a lavender bush with my camera I finally grabbed an image I was happy with.”

Highly commended was French snapper Mathieu Bouard, who lives in Porto, Portugal, for this lizard with a fly on its nose.

Mathieu, 30, said: “I took this picture in the south of Thailand, in Khao Luang.

“I was in the jungle, walking to see a waterfall and i saw this beautiful lizard called an oriental garden lizard also known as a ‘Changeable Lizard’. “I was surprised to see a fly on his nose and both were in a static position, like if time had stopped.

“I decided not to lose a second to take this picture.”

Another Brit, Chris Algar was highly commended for this stunning shot of a daphnia , or water flea, giving birth.

Retired Chris, who lives near London said: “I took the shot at home using an Olympus BHB microscope with a 4x objective and dark field illumination. “As I am new to photomicroscopy, I took a number of shots, including ‘Daphnia giving birth’, to find out what kind of images I could produce.”

Former ballet teacher Hilary Dean-Hughes, from Hampshire got this picture of a balletic fox leaping in the snow in Yellowstone National Park.

The highly commended photographer said: “At the time the park was a frozen fairyland, silent and still at -24c.

“We were following a frozen stream when the fox came trotting into view. He became still and proceeded very slowly sensing a meal under the snow. “Several times he crouched looking as though he would leap high to dive through the snow for the meal below.

“When he did spring I was lucky to catch the action and his shadow was a bonus.”

Brit Ian Cook was highly commended for his shot of a kingfisher with its dinner as was Mario Fiorucci from Santa Rosa, Argentina for a stick mantis with a bee.

Nancy Sadowski from New Jersey went to Florida to get this shot of a pair of dolphins that her husband had been swimming with.

Nancy, in her 50s, said of her highly commended snap: “The photo was taken in Key Largo, Florida and my husband and I had just finished a free swim with these dolphins. “The mother dolphin’s name was Ding (short for ding-a-ling) and the baby was Bebe-bit.

“This particular dolphin was very friendly with my husband and swam close to him throughout the hour.

“We were leaving the facility and Ding did a ‘swim by’ with her baby and that’s when I caught the shot.” And another Brit, Judith Matthews, from Dorset was also highly commended for her cute picture of a harvest mouse on a cornstalk.

Mum of two Judith said: “I wanted to photograph the mouse to try and bring these creatures to peoples’ attention.” Phil Jones, CEO of the Societies said: “For this competition we asked to see animals, insects, fish, in fact all life big or small.

“The competition did not disappoint with the quality of images entered. Michelle’s image of the horned frog captured the theme of the competition brilliantly.”