They say one of the things that inspires a nation’s folk-law and fairy tales is the composition of its forests. Germany’s Black Forest, known for inspiring Hansel and Gretel, Rapunzel and Sleeping Beauty, has a slightly dark and sinister feel to them which is reflected in stories by the Brothers Grimm, whereas British forests, which have a mythical […] 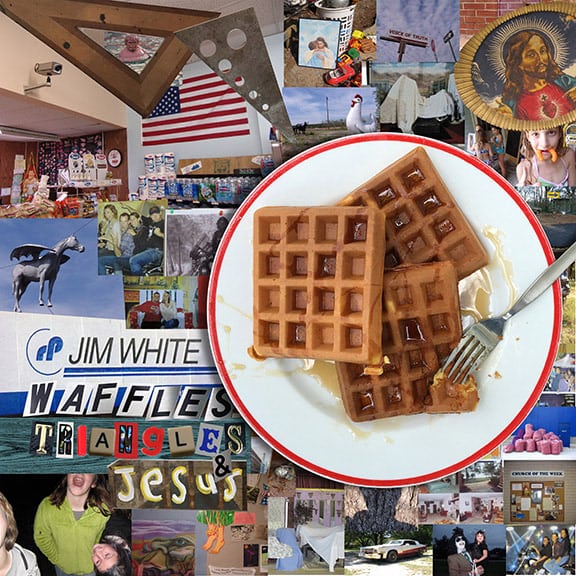 They say one of the things that inspires a nation’s folk-law and fairy tales is the composition of its forests. Germany’s Black Forest, known for inspiring Hansel and Gretel, Rapunzel and Sleeping Beauty, has a slightly dark and sinister feel to them which is reflected in stories by the Brothers Grimm, whereas British forests, which have a mythical feel, inspire tales such as the Chronicles of Narnia, the Lord of the Rings and Robin Hood.

The parallel came to mind listening to Jim White’s latest album ‘Waffles, Triangles & Jesus‘. The first track on the album, Drift Away, has a distinctly Alaskan feel to it in the same way Eddie Vedder encapsulated the wilderness of America in his album Into the Wild. Your mind conjures images of vast remoteness, with undertones of feeling isolated, lost and alone.

In an interview with Folk Radio, White explains the inspiration for it: “In my late 20’s I found myself increasingly drawn to the company of profoundly damaged romantic partners, mistaking their devils for my own. Big mistake–one fueled by a weird cocktail of personal cowardice and hubris.

“We all have our crosses to bear but every one is balanced differently. Even a big man can struggle carrying a small cross if the balance is unorthodox and when you come to that point where you finally realize you’ve fooled yourself into carrying the wrong load and you’re living in bad faith, sooner or later you face that choice to either walk on in your wrongness, raging against your own miscalculation, or try to lay said cross down, leave it behind, praying powers of mysterious grace carry you beyond the valence of said crosses gravitational field. The latter is harder than it sounds for those configured like me.

“Drift Away is a simplified representation of that complicated proposition.”

It is an undoubtedly powerful marker for the rest of the album, but by no means sets the tone for what is to come.

Waffles, Triangles & Jesus is a mash up of tracks that are as dispersed as the album title would allude.

Where Drift Away sets a sombre mood you soon get snapped out by more classically folk songs like Long Long Day and Far Beyond the Spoken World that are reminiscent of Jethro Tull’s forest-inspired folk.

It is a soothing listen and will be joyfully received by any folk fan, but one can’t help think that where the album really comes to life is when he departs from folk to the more rootsy tunes where folk makes fleeting appearances. Drift Away, Reasons to Cry and Prisoner’s Dilemma are among the winners from the album, songs that are clearly more reflective of his mood at the time and thus more heartfelt and sincere.