"If both cities play it right Lon-Dam could be one of the great financial centres of the 21st century," a Telegraph columnist reckons. 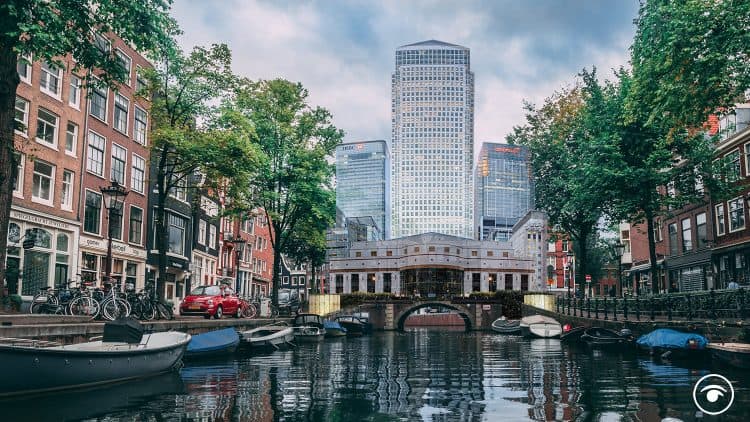 A post-Brexit masterplan to merge London with Amsterdam has been tabled in a bid to plug financial trade lost to Brexit.

Earlier this month the governor of the Bank of England, Andrew Bailey, said he does not expect the EU to open the doors to UK financial services exports after Brexit.

“On equivalence, I think it’s fair to say that nothing really has moved forwards,” he told a news conference, echoing gloomy remarks made by chancellor Rishi Sunak, who said a financial services deal between the two blocs “has not happened”.

In January, Amsterdam overtook London as Europe’s largest share trading centre, with an average €9.2 billion (£8.07 billion) shares a day traded on Euronext and the Dutch arms of CBOE Europe and Turquoise in January, a more than fourfold increase from December.

The surge came as volumes in London fell sharply to €8.6 billion (£7.5 billion), removing the UK from its historic position as the main centre for the European market, according to data from CBOE Europe.

It has prompted financial columnist Matthew Lynn to argue that there is a natural opportunity for the City if it was to consider pairing itself with Amsterdam.

“Amsterdam would handle all the trades and listings which the regulations demand are completed within the EU, while London, as well as re-focusing on the global capital markets, could keep much of the high-level deal-making and research work.

“With similar buccaneering, global traditions, it should be a natural fit – and with the right infrastructure in place, Lon-Dam could be one of the great financial centres of the 21st century.”

WE WANT OUR BRITISH SOVEREIGNTY

France in particular was determined to make Paris the major winner from the UK’s departure from the EU, Mr Lynn noted, so the Dutch shouldn’t be surprised if “there were rule changes to undermine Amsterdam’s new-found prominence “.

The financial columnist concluded in his report for The Telegraph: “If both cities play it right Lon-Dam could be one of the great financial centres of the 21st century.”

“With similar rules, and lots of traffic in people and ideas, it could sit naturally between New York and Shanghai, channelling capital into and out of Europe, and sticking to the EU’s rules while at the same time preserving the dynamism that made the City a thriving financial centre.

“Sure, it will annoy the politicians in Frankfurt and Paris – but the economies of both Britain and the Netherlands will benefit hugely from rebooting one of history’s great partnerships.”

Sound a bit fanciful? We think so.

Related: Full list of 191 companies named and shamed for not paying minimum wage