Ministers hope to double UK exports to £1 trillion by 2030. Do they realise David Cameron promised the same thing in 2012? 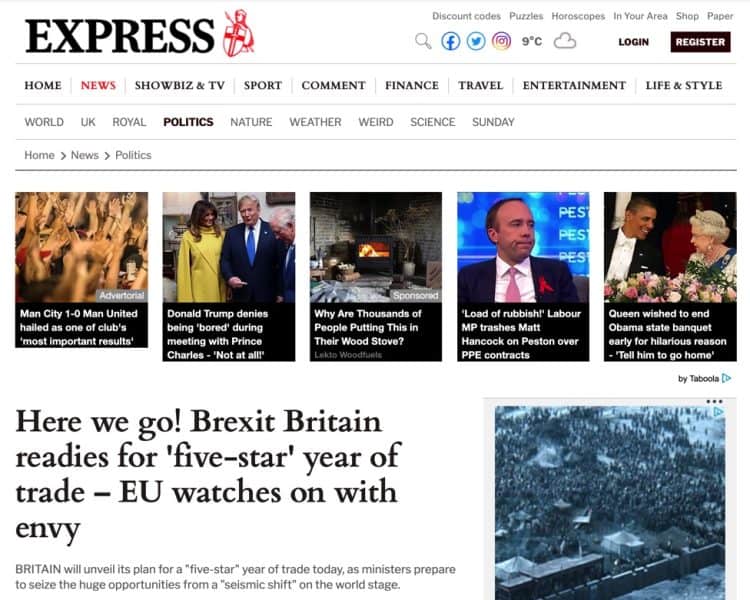 An Express report predicting a “five-star” year of trade in Britain has left people rubbing their eyes in disbelief this week.

The right-wing newspaper said ministers are preparing to seize the huge opportunities from a “seismic shift” on the world stage as trade secretaryAnne-Marie Trevelyan unveiled her plans at the Margaret Thatcher Conference on Trade.

“She will highlight how post-Brexit Britain is shifting its focus to nations in the Indo-Pacific,” it noted, “with emerging economies in the region projected to surpass the economic size of G7 during the 2030s.”

The Express said the deals will be put in place as the “EU watches on with envy”, with ministers hoping the UK will double its exports to £1 trillion worth of goods and services by 2030 (a target David Cameron first set as prime minister in 2012!).

It overlooks falling levels of trade with our biggest export partner, which according to Emily Thornberry, is the only way the government will achieve that target.

“Mending our trade with Europe must be the priority,” she said. “That target cannot be achieved unless the government gets its head out of the sand, fixes the holes in their botched Brexit deal, and helps our exporters recover their trade with the UK’s biggest market.”

Earlier this week it was revealed that Northern Ireland’s economy outperformed all other UK nations and regions due to Brexit.

ONS data on the Covid pandemic bounce back showed the region is thriving under the Northern Ireland Protocol, with its economic output over recent months only 0.3 per cent below the same period of 2019.

It raises concerns about a “two-speed UK” – where different things happen in Northern Ireland compared to the rest of Great Britain.

And not in a good way!