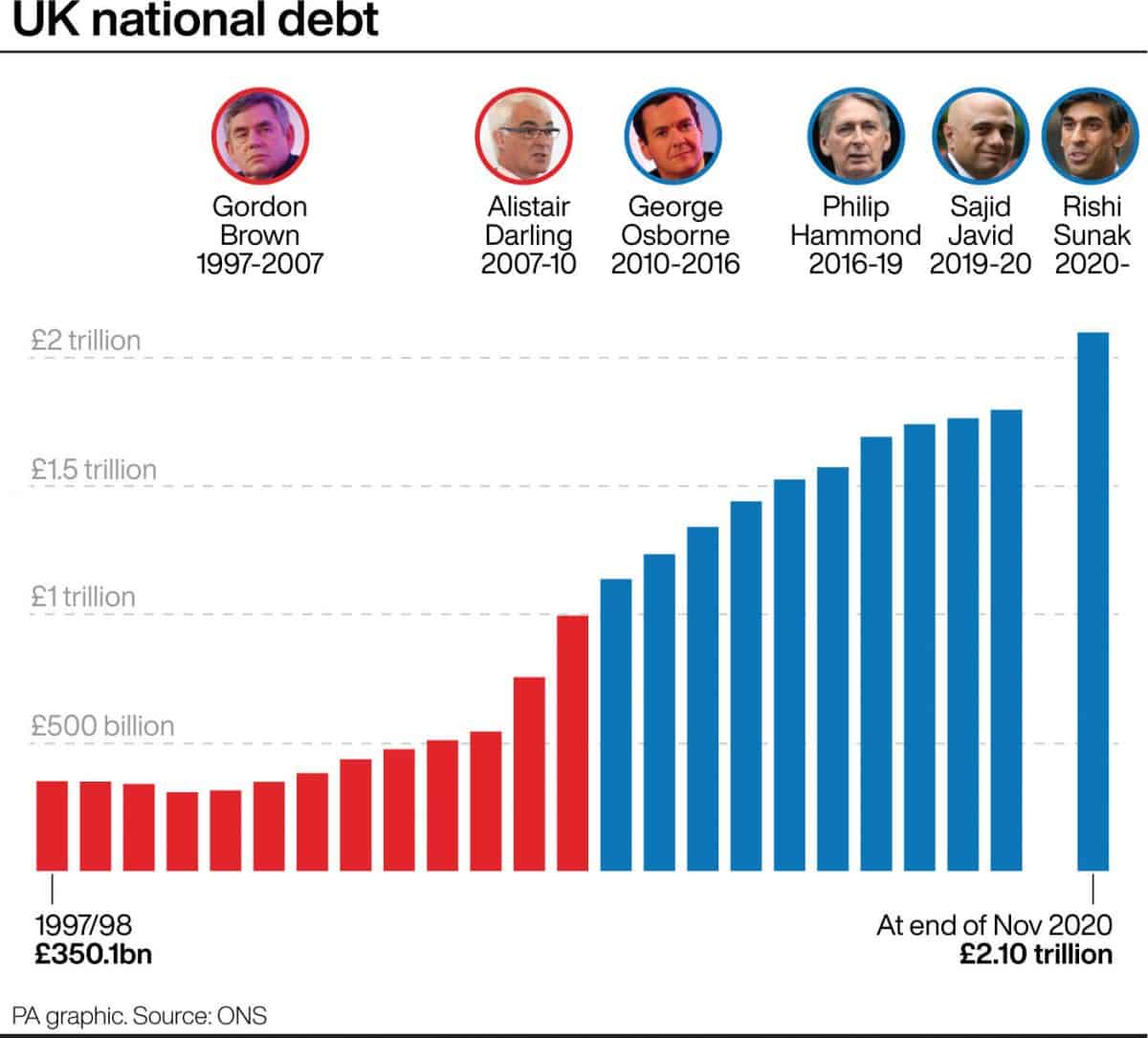 Despite claiming to be the party of fiscal responsibility, the UK’s debt pile under the Conservatives has increased exponentially over the past decade.

Often weaponised against the Labour Party in the elections of 2010 and 2015 it has increased in every year since the Tories took charge, and has grown at an alarming rate this year.

Government borrowing surged to a record £31.6 billion in November as efforts ramped up to support the economy through the second wave of the pandemic, official figures have shown.

The Office for National Statistics (ONS) said last month’s borrowing – excluding state-owned banks – soared by £26 billion year on year and marked the highest seen in November and the third highest in any month since records began in 1993.

Borrowing has hit £240.9 billion for the first eight months of the financial year – £188.6 billion more year on year and breaking yet more records.

Recent official forecasts from the Office for Budget Responsibility (OBR) predict borrowing could reach £393.5 billion by the end of the financial year in March, which would be the highest seen since the Second World War.

It comes after the Government launched more than 40 schemes across the UK to help households and businesses through the coronavirus crisis.

One of the most costly has been the furlough scheme for workers, which was last week extended again until April 2021.

The most recent figures from HM Revenue & Customs showed another £3.4 billion worth of claims were made between November 15 and December 13, taking total claims to £46.4 billion and 9.9 million furloughed jobs.

The ONS said borrowing rose as tax and National Insurance receipts fell by £38.3 billion – or 8.6 per cent – year on year in the eight months to November.

But government support for individuals and businesses during the pandemic contributed to a 30 per cent or £147.3 billion hike in central government spending.

He said: “If the trend of the first eight months of fiscal year 2020/21 continued, the budget deficit would come in around £264 billion.

“However, it looks likely to come in significantly higher than this with the furlough scheme now being extended until April and other supportive fiscal measures announced for the economy in the recent Spending Review.

“Indeed, if introduced, more support for businesses affected by Tier 4 restrictions could potentially send the budget deficit above £400 billion.”