CEO pay has bounced back post-covid but the pay for frontline staff who kept businesses operating during the pandemic have seen their pay flounder. 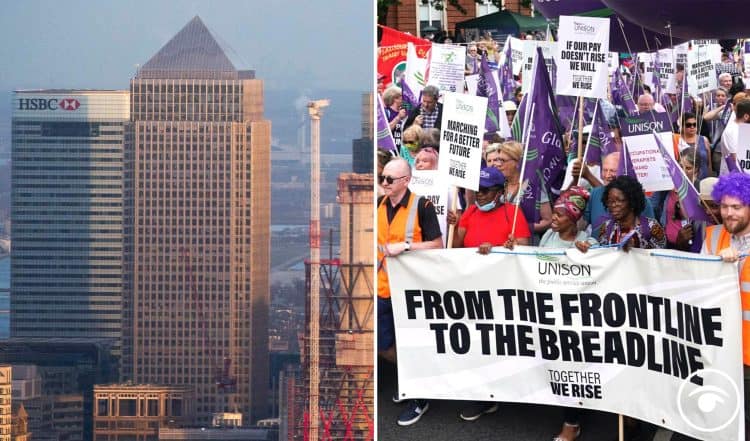 The pay of some of the UK’s top CEOs has been thrown into the spotlight as many companies report record-breaking profits, despite increasing prices for customers and refusing to boost pay in line with soaring inflation.

It comes as the cost-of-living crisis is increasing regional inequalities across different parts of the country and putting the Government’s levelling up agenda at risk, bosses at Legal & General warned.

Research from the pension and investment firm found households in Yorkshire and Humber, the South West and Northern Ireland were particularly worried about their finances in the face of soaring bills.

The increasing profits and likely bonuses of the energy companies have not been missed by the newspapers.

So how long does it take to for a CEO to earn what the average front-line worker makes in a year?

Jobs board Breakroom, which analysed pay data from 2021, found that while the average frontline worker ​​at Royal Mail earned £11.75 per hour in 2021, company CEO Simon Thompson earned 26 times more, taking home a £596,000 salary.

On average, it takes a UK CEO just four days to earn the salary of their frontline workers, they found.

NHS Chief Executive, Amanda Pritchard, took home £260,000, being paid 12 times more than her own workers’ pay. Whilst, Simon Roberts the CEO of Sainsbury’s, who is currently under pressure to pay all staff the Real Living Wage, took home 202 times the average Sainsbury’s hourly workers’ pay.

Anna Maybank, Co-Founder and CEO of Breakroom, said : “Exorbitant CEO pay is one of the major contributors to rising inequality in the workplace, and it needs to be tackled.

“Right now employers are facing the worst candidate shortage in history at the same time employees are facing a massive cost of living crisis.

“No CEO should be earning hundreds or thousands of times their own workers’ pay and it’s unjustifiable that on average it takes just four days for a FTSE 100 CEO to earn the equivalent of a UK frontline worker’s annual salary.

“CEO pay has bounced back post-covid but the pay for frontline staff who kept businesses operating during the pandemic have seen their pay flounder.

“Our members have told us that low pay mixed with the cost-of-living crisis is the number one reason they are currently looking to leave and change jobs. If businesses want to keep and attract talent they are going to have to start filtering down their profits to frontline workers.”