The first tiger habitat in the UK to feature a pool deep enough for the animals to be fully submerged has opened to the public at Paradise Wildlife Zoo in Hertfordshire, with a viewing area for visitors to watch the tigers swim and play underwater.

by Christopher Marchant
in Destinations, Travel 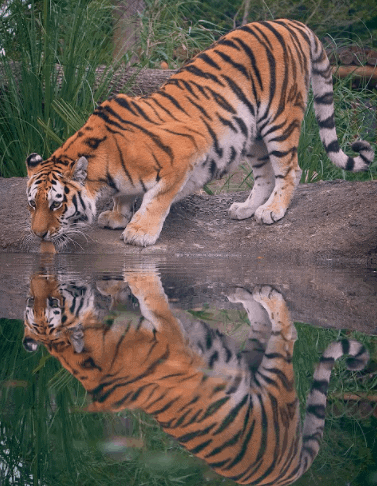 The first tiger habitat in the UK to feature a pool deep enough for the animals to be fully submerged has opened to the public at Paradise Wildlife Park in Hertfordshire, with a viewing area for visitors to watch the tigers swim and play underwater.

The indoor habitat is currently home to Amur tigers Aleena and Siberia, also the region from which these animals first originated. The new enclosure was opened by Giles Clark, who first worked at the zoo at the age of 14, and has since gone onto host BBC shows Tigers About the House and Bears About The House.

The pool the tigers will swim in at the zoo will also contain a wide variety of exotic fish, to arouse Aleena and Siberia’s curiosity.

At the opening ceremony, Clark also announced that Paradise Wildlife Park will be opening Sun Bear Heights in 2021, housing sun bears, binturongs, and otters together, another UK first. The zoo is home to a further wide variety of animals, also including lions, zebras, penguins, emus, meerkats and Bactrian camels.

The tiger enclosure was originally due to open in the Spring, but the zoo was closed due to the Covid-19 pandemic, and it is currently operating at reduced capacity and the public must book in advance to visit.

There are currently fewer than 4,000 tigers left in the wild, a figure substantially less than the number of tigers in captivity around the world. Of the need to balance conservation of tigers in the wild and maintaining those in captivity, Clark said: “The balance is that the tigers that we have in captivity, the ones that are part of good, responsibly executed conservation programs and are cooperating with regional breeding programs, can act as ambassadors for their wild counterparts.

“They help us to engage the public, create support and education and awareness. The phrase that I often use is like an insurance policy, if something was to happen to tigers in their natural habitat. For example, there are only around 500 Sumatran tigers left in the wild.”

The opening of the new tiger enclosure at Paradise Wildlife Park comes in a year in which the big cat was at the centre of cultural phenomenon Tiger King, which featured the captivating egotist Joe Exotic and a number of American zoos acting in highly irresponsible ways (Exotic was imprisoned in 2019 in part on charges of mistreatment of animals).

Speaking to The London Economic, Clark said of the show and its impact: “As a television series. I can’t help but feel it was a complete and utter distraction and missed opportunity. It really didn’t drive home what should be the real message when we’re talking about these things and that’s just how critically endangered tigers are in the wild. Instead it was more of a gaudy reality show.”

Paradise Wildlife Park, like zoos across the United Kingdom has struggled massively this year due to the restrictions of the Covid-19 outbreak. Lynn Whitnall, CEO of Paradise Wildlife Park, said: “Government support has been in many ways been exceptional, as without the furlough scheme we would sadly have had to let some staff members go. The actual funding for zoos hasn’t worked for us, and only a couple [such as Chester] have received that money.

“The real challenge is going to be this winter. We were closed for an incredible hot summer that could’ve seen record numbers, but now has to be treated as if it was one of our worst winters [for attendance].”

Paradise Wildlife Park has set up a Just Giving Page so that anyone can donate funds that will directly go to the upkeep of animals. Please see the link to the page: https://www.justgiving.com/campaign/animalsupportfund