The woman, who did not wished not to be named, said she reacted with "shock, dismay and worry" as fellow passengers flouted procedures. 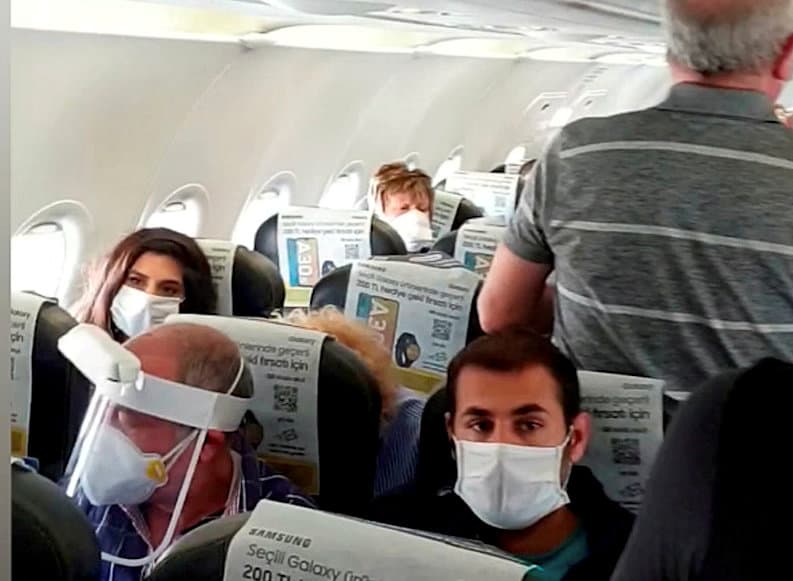 Video grab from a ''crowded'' repatriation flight from Turkey to the UK on April 28 Credit;SWNS

A carer has spoken of her “shock” after she recorded footage of her ”crowded” repatriation flight – claiming there was no social distancing.

The woman who took the video had been visiting her daughter in Turkey but was whisked back to the UK at the end of last month.

She says videos show the Pegasus Airlines flight which departed Dalaman airport at 15:25 on April 28 having people packed in together.

The woman, who did not wished not to be named, said she reacted with “shock, dismay and worry” as fellow passengers flouted procedures.

She added: “My original flight home was cancelled so I waited for the closest repatriation flight but wish I never took it now because I’m so worried I may have caught something.

“It’s extra scary as I have an autoimmune illness, and it would also now effect my family.

“We only booked the flight because when my husband looked at booking seats, it showed false information as if all middle seats were empty or unavailable. But they were full.

“We were also all piled on to one bus to transfer from flight to terminal. An elderly couple stood by me on the bus commented to each other about the lack of social distancing.”

She also said she believed the stewards, who had gloves and masks, felt “resigned” to the situation.

Pegasus Airlines said: “Pegasus has operated special rescue flights and all the applicable rules and regulations have been adhered to.”