Aviation bosses have complained that the number of prospective European employees has plunged since Brexit, exacerbating recruitment problems. 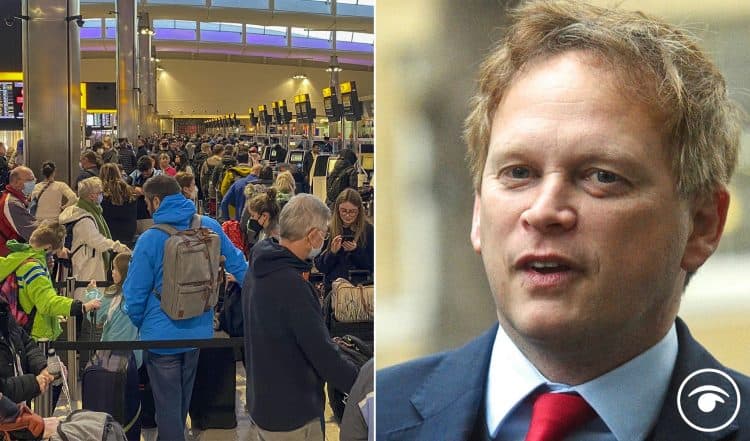 The boss of Europe’s largest budget airline has called for the army to be deployed at airports to help ease delays.

Michael O’Leary, Ryanair’s chief executive, said: “Bringing in the army, which they do in many other European airports, would at a stroke relieve the pressure on airport security and would mean that people have a much better experience,” reports The Times.

It comes as the Transport Secretary Grant Shapps is risking travel chaos by rejecting calls for an emergency visa for aviation workers, industry bosses have claimed.

Sources speaking to the BBC said Grant Shapps has ruled out filling gaps in the sector by amending the Government’s Shortage Occupation List.

It comes after travellers hoping to get away for the half-term break faced hour-long queues and missed flights, with experts blaming understaffing at airports.

Aviation bosses have complained that the number of prospective European employees has plunged since Brexit, exacerbating recruitment problems.

Privately, bosses have questioned why some – including chefs and ballet dancers – are entitled to a skilled worker visa, while aviation employees are not.

Shapps used the meeting to call for bosses to “get a grip”, saying that there was “no excuse” for the disruption that has led to hundreds of flight cancellations in recent days.

Andy Prendergast, national secretary of the GMB union, said that staffing issues at Britain’s airports “have been on the radar for a long time”. He told BBC Radio 4’s World at One yesterday: “This unfortunately was a foreseeable problem, it was one we warned about at the point at which the mass redundancies were made. We asked the government to look at the aviation industry as a special case and they refused.

“For Grant Shapps to come out as he has in the last 24 hours is a little bit disingenuous considering these problems have been on the radar for a long time.”

Ian Costigan, managing director of Manchester Airport, said: “Since the turn of the year, we have worked to recruit the people we need to support the recovery of our operation.

“This takes time due to the lengthy background checks and training involved, but we have been really encouraged by the level of interest.”

The airport has recruited 340 people this year, with a further 500 undergoing security checks.