Searching for sea turtles in the jewel of the Southern Grenadines 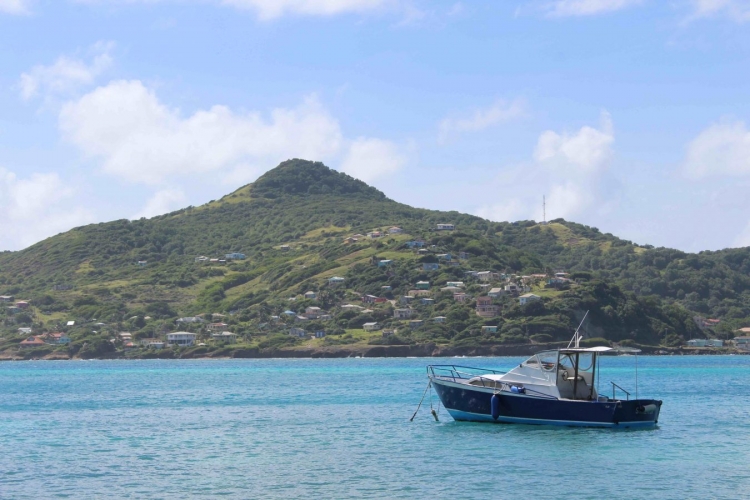 “I arrived in the Grenadines 27 years ago and decided to stay,” says Isle of Wight-born Jeff Stevens – the skipper of Beauty, a sailing boat he built alongside the local shipwrights on Petite Martinique.

“What made you stay?” I ask. He grins and opens his arms wide gesturing towards the landscape. We’re surrounded by an aquamarine sea punctuated only by Bounty advert-style islands and the odd fancy yacht. The sun beams down and, but for the tumbling of waves, it’s silent. I give Jeff an approving smile and we continue sailing.

We’re aboard a 53t sloop charter from the tiny island of Petit St Vincent (PSV) heading towards the ‘Jewel of the Southern Grenadines in search of sea turtles. Officially known as Tobago Cays, the area has been protected as a Marine Park since 1998. One of the uninhabited islands – there’s five in total – is where a rum-drunk, abandoned Johnny Depp (as Captain Jack Sparrow) minced around in Pirates of the Caribbean: Curse of the Black Pearl. The outlandish pirate was on Petit Tabac marooned with Keira Knightley (Elizabeth Swan), which would be romantic if she hadn’t ended up burning all his rum and getting off with Orlando Bloom instead. Running my eyes along the shore, I can think of much worse places to be deserted – and with shoddier company.

“There’s a sea turtle” announces Jeff’s first-mate, Simba, a strapping local man with a woolly bearded jawline sharp enough to cut through a wedding cake. Simba is now pirouetting from the stern to bow – with the boat leaning almost 45 degrees – in order to get a better look. Before I ready my shaky sea legs, the turtle has dived beneath the surface and vanished.

Sea turtles spend most of their lives underwater but can’t breathe when submerged and are thought to have existed for over 100 million years (pre-dating dinosaurs). These astonishing reptiles can stay on the seabed, if at rest, for hours on end. Although when moving from place to place they tend to resurface every three to five minutes to get a breather.

“You’ve got to be quick,” says Jeff, a slight man with grey hair and a comforting nature. “They’re quick, very quick.” He reiterates. He’s not wrong. On a good day and presumably with a canny strong tide, sea turtles – sometimes measuring up to 1.5 metres in length and weighing on average 160kg – can swim up to 22MPH.

I look around our motley crew made up of slightly nauseous-looking Brits with tartan sunburn. Disappointment is etched on the face of the chap sitting beside me. A look only to be rivalled by that of a child who has just been refused a third Easter egg. Jeff assures us all we’ll see plenty of sea turtles today and the frown is turned upside down.

“Where’s your favourite place to go sailing, Jeff?” I ask. The Grenadines is top of the list he explains. But when I ask what his plans are for the future he tells me he’s not got one, he just tries to live in the now. It’s the sort of answer I’d expect from a 23-year-old pilates teacher, not a man of his advancing years. But that makes it all the more refreshing.

On the horizon, I spot my first sea turtle. It disappears before I can say cowabunga. But all is well. It’s 28 degrees with a faint breeze and the sun introducing itself to the bow of the boat. The sky is bluer than a Swede’s eyes and we’re almost there. Jeff readies us with our kit and sets us on our way in a speed boat not entirely suited to six people, five who are wearing flippers the size of cricket bats.

After a snorkel around to get our bearings, we start looking for the infamous sea turtles. It shouldn’t be too difficult given they’re the size of a space hopper. One of the group spots a turtle’s head (not that kind) in the distance, so I opportunistically front crawl towards it. Sure enough it’s gone before I can do my second arm rotation. We spend the next two hours in a similar fashion. Most of the group have face-to-face encounters, while I’m left feeling a little deflated. A feeling that’s quickly remedied by a feast of barbequed lobster with spicy butter sauce, lamb chops, fresh mahi-mahi and a tomato and feta salad, a tickle of dry white wine and some interesting stories from Jeff.

Jeff spent his younger days flitting between office jobs. He did a bit of PR and was a legal clerk for a time. Both jobs, he tells me, didn’t last very long. Jeff took to the sea at 25-years-old and has been sailing ever since – including smuggling bacon into Turkey in the 80s. That was before large parts of the country was westernised. Jeff stumbled upon the job at PSV after hearing whispers from a friend that the current crew and boat  had not returned when scheduled  for the new Petit  St. Vincent season for Jeff’s good fortune never did

I ask him whether he has any plans to move on to somewhere new. He takes a thoughtful pause and says perhaps the most profound thing I’ve ever heard.

“You can search and search forever, but sometimes you’ve just got to know when you’ve arrived. You know what I mean?”

Rates at Petit St. Vincent start from £870 per room per night. This rate includes three meals daily, all non-alcoholic beverages, the use of non-motorized water sports and all facilities at the resort.
For more information visit www.petitstvincent.com