Nashville: Exploring the other side of Music City 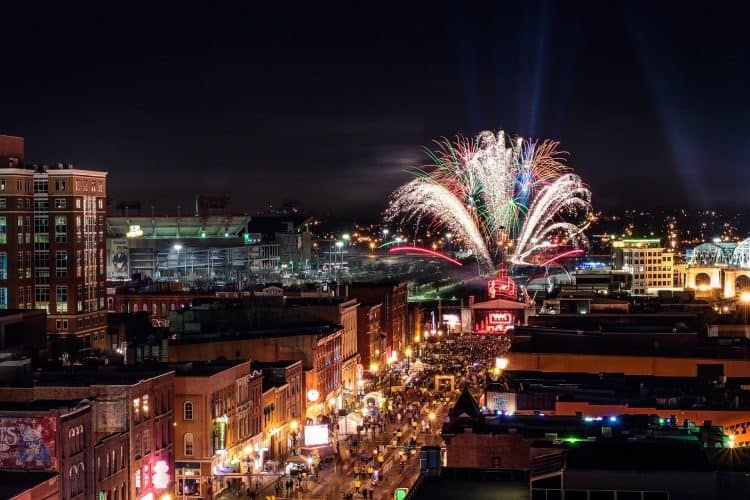 A short, thick-set lad in a black and white trucker cap and grey plaid shirt throws his hands in the air, like a kid on a rollercoaster, mouthing ‘you shook me alllllll night long’  to the ACDC track blaring from the speakers. Meanwhile, a 50-something bloke wearing unforgiving leather leggings, a black, sweat-drenched t-shirt and an aggressively-receding mullet shuffles around MJ-like throwing double rock signs flagrantly in the air. Next to him, a bleached-blonde woman in light denim jeans with glitter-spangled pockets and a pale blue cowgirl shirt boogies away from the crowd of sidewalk groovers, snatches the arm of a startled passer-by and pulls her into the melee. This isn’t a flash mob in central London or an 80s rock festival. It’s just another Tuesday night on Nashville’s Lower Broadway.

Every day of the week here, live music roars along the strip of neon-fronted bars (there are over 180 live music venues in Nashville). Sloshed tourists cycle past on booze carts, cowboys yee-haw, cowgirls yee-haw, homeless folk hold offensive signs, and inebriated stag parties hop from bar to bar. I’m finding out pretty soon that Broadway is not the place to be if you’re jetlagged or hungover, and I’m jetlagged and hungover. As tempting as it is to grab a Pabst Blue Ribbon and join the party, my massive bed at the W Hotel is calling. I’ll hit the honky tonk bars tomorrow.

I arrived on the first British Airways flight from London since the pandemic to discover Tennessee’s loud and proud capital has been building – 23 new hotels, 197 new restaurants and bars and the country’s largest ‘soccer-specific’ stadium. But let’s not forget the classics. The Ryman Auditorium has been graced by everyone from Bob Dylan and Dolly Parton to Ray Charles and Harry Styles. Then there’s the renowned Bluebird Cafe (where Taylor Swift was discovered) and the infamous Grand Ole Opry – one of the most famous country music shows in the world. But is there more to Music City than country music and rhinestones? That’s what I’m here to find out.

Early signs are promising as I wander around the recently opened National Museum of African American Music (NMAAM). The museum takes visitors on a musical journey through 50 genres, from jazz, soul and blues to rap, country and classical. All by using touch panel screens and animated timelines. There are make-your-own music games, rapping booths, dance machines and historical musical artefacts. Although it seems a little out of place for a city known for country music — a question I put to Henry Hicks, CEO and President of NMAAM.

“Nashville has a rich history of black music from the Fisk Jubilee Singers to the many great artists who played on Jefferson Street. Apart from showcasing the people, stories and sounds that have come to define the American soundtrack, the museum is a place dedicated to being stewards of Nashville’s vast artistic community,”  he explains.

So what’s the goal?

“Our hope is to establish the museum as a hub of African American music, arts, culture and conversations in Nashville. We want our visitors to leave with a greater appreciation for Black artists, songs, musical styles, stories, labels and icons, but also a greater appreciation of the Black experience in America through music and history and how that experience has impacted the world,”  he finishes.

The following day, I’m introduced to another anomaly: Nashville cider. Diskin Cider, co-founded by Adam Diskin and Todd Evans in 2018, is Nashville’s first and only craft cidery. The industrial-looking cidery-come-bar is home to a cool crowd of cider enthusiasts and even hosts its own Drag Brunch. The two jolly owners whip me around the colossal space before presenting me with a flight of their now-famous additive-free, gluten-free ciders. Some are whackier than others – black tea, lavender, blueberry – but all are polished off quickly.

My next stop is Pink Door Cookies. This tiny, hole-in-the-wall cookie shop is the brainchild of Matthew Rice, who lost his job as a pastry chef at the start of the pandemic. Rice baked to fill time, then opened up a cookie pick-up service from his home. People loved the idea so much he was making 100s of cookies a week. He launched his first brick-and-mortar store in the trendy Wedgewood-Houston neighbourhood in December 2020. One bite of his blueberry pancake cookie assures me it’s not all hype.

Another place generating similar buzz is White Limozeen – The Graduate Hotel’s rooftop bar in the lively Midtown neighbourhood. Apparently, the hotel banned social media stars from bringing suitcases (for wardrobe changes, obviously) as queues were becoming unmanageable. One look around, and it’s easy to understand the appeal. My eyes dance from clashing patterns to neon signs to frilly cabanas that look like Mr Kipling’s pink French Fancies and a photogenic outdoor pool. Feeling out of place, I head downstairs to Cross Eyed Critters – a gritty karaoke bar with an ‘animatronic’ backing band (dancing, instrument-playing robotic animals).

It’s not hard to meet folk in Nashville – locals are eternally welcoming – but if it were, you’d still make friends at Cross-Eyed Critters. Here I meet a smiley Miley Cyrus double from Florida, share shots with a lovely, heavily-tattooed British bartender, and dance with a gun-toting musclehead with a penchant for Shania Twain’s ‘That Don’t Impress Me Much’. Then I clear the dancefloor singing the Spice Girls with a group of Brits.

After a whisky, I start a conversation with one of the hosts. Lili Jay is one of the new kids on the block. She’s a musician looking to make her way into the industry. New York City was tempting, but she chose Nashville because “everyone is so kind and helpful and genuinely wants to see you succeed”. She tells me there’s a real sense of community here regarding music, and it’s not just country.

The music scene here alone is way more diverse than that. I personally don’t even make country music.” She says. I explain that I’m looking for something a little more alternative, “If you’re trying to get away from any country feel, definitely go over the bridge to East Nashville. There are some cool bars, coffee shops, and eclectic places to shop. Very much Austin/LA vibes, just in Nashville.”

I head over to East Nashville or East Nasty with only a little time left in the city. Lily Jay is right about the Austin/LA vibe. Bearded men mill around in tiny beanies while tattooed folk guzzle craft ale in dive bars like Dino’s – a gritty burger joint championed by the late Anthony Bourdain. My favourite spot is Rosemary and Beauty Queen, a cute yellow wooden house draped in fairy lights. After milling on the terrace drinking whisky, the honky tonk bars on Broadway are calling, but my energy drops in the Uber back into town, so it’s straight to the Grand Hyatt Nashville for a kip. I’ll hit the honky tonk bars another time.

Before heading home, I make a final stop at Imagine Recordings – this is Music City after all. I poke my head into a recording booth where I’m greeted by a tall, handsome chap who looks like he could be famous. Shaboozey, a genre-bending musician from Fairfax Virginia, is in town recording his new album. “Are you a musician?” he asks. Desperate to tell him I can play three songs on the ukulele, I opt instead to reply with a simple no. “You should come to East Nashville later to party with us,” he says, and I think he means it. Sadly, it’s too late, my flight leaves in a few hours.

Before heading to the airport, I take one last stroll along Lower Broadway. There’s a haggard homeless chap with a sign reading F*ck Joe Biden, hen party’s rolling, like marbles, out of bars pumping out country music, and liquored-up cowboys howl like there’s a full moon somewhere. It’s only 11 am.

On the plane back to Blighty, it dawns on me that I never made it inside a honky tonk bar, and honestly, I don’t think I ever will.

The W Hotel Nashville offers rooms from around £270 per night.

The Grand Hyatt Nashville offers rooms from around £220 per night.

For more information on visiting Nashville, go to visitmusiccity.com