We take a girlie break at the DoubleTree by Hilton London – Tower of London. With Christmas in the air and a family feeling dominating, I decided it would be apt to whisk my older and lovelier sis away for a night for some quality girlie time. Our destination was all of 30 minutes away: […] 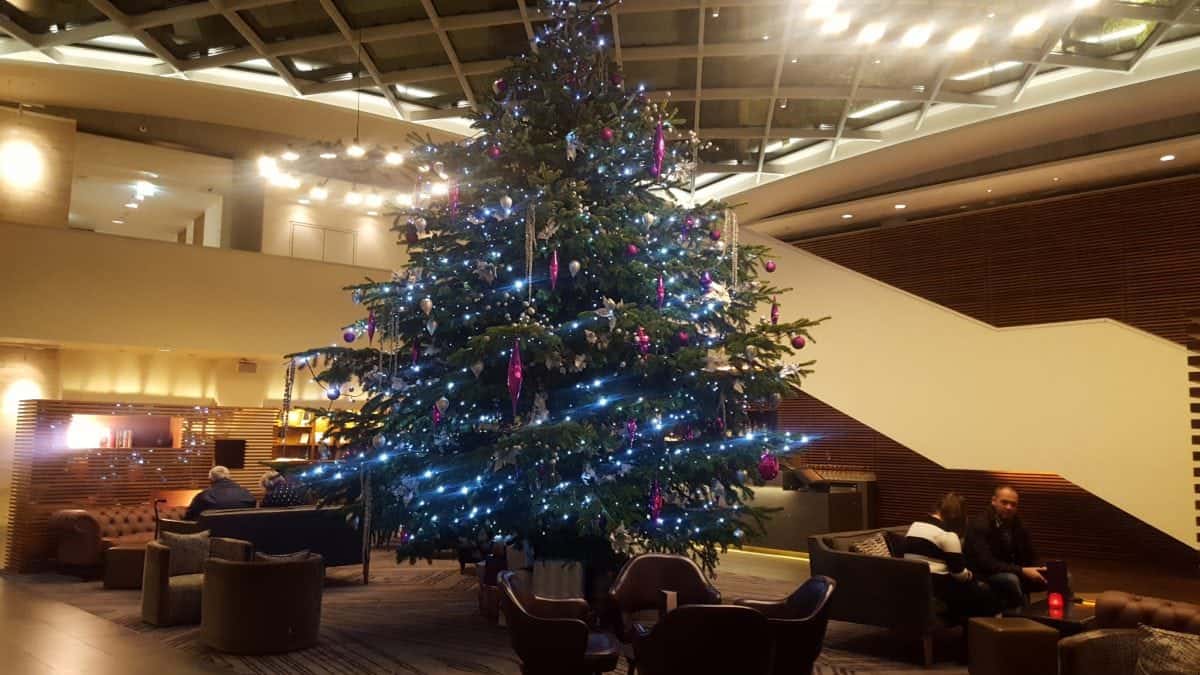 We take a girlie break at the DoubleTree by Hilton London – Tower of London.

With Christmas in the air and a family feeling dominating, I decided it would be apt to whisk my older and lovelier sis away for a night for some quality girlie time. Our destination was all of 30 minutes away: the DoubleTree by Hilton London – Tower of London, which was perfect for our plan of a post-work evening out, followed by a reviving walk along the Thames Path the day after, leading nicely to the shops on New Change.

So clocking off work for the rest of the year (yay!), we packed our overnight bags and headed out to see what this part of London – and the 582-roomed hotel – had to offer.

It’s in a hotel-heavy part of town near the Tower of London (Novotel is opposite, and The Grange City Hotel and Citizen M are at the end of the road) and ambling over, it’s clear why it’s so attractive to visitors. In a no-man’s-land, in the way that major hubs of London are often joined by quiet local streets, it has a residential feel but within a ten minute walk there’s Aldgate, Tower Bridge, Spitalfields, Bank and maybe even Borough Market if you’re a quick walker.

Small by international standards but palatial in London terms, the room was what you might expect from a standard four-star these days. Notable features were two USB charging points, a wonderfully comfy double bed and contemporary decor. 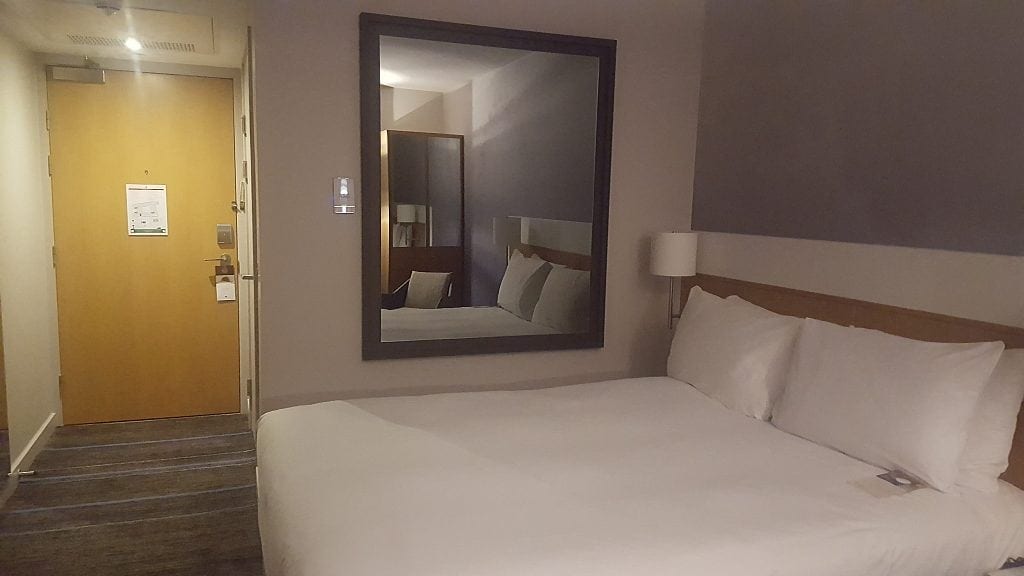 The stench of smoke suggested naughty guests before us, so we were grateful that the window actually opened, and it offered a lovely view of The Shard too.

The only other quibble was that the air-con began squeaking loudly at 7am, which is a more annoying way to wake up than hearing your neighbour blend their Nutribullet (my usual alarm clock). We stayed in an executive room which meant there was a giant 55inch TV and we had access to the executive lounge, which is exactly like an airport lounge with newspapers, self-service drinks and finger food. Just in a hotel.

Quite stealable, really. Most of the fun stuff you had to ask for, but there was a v useful mouthwash and vanity kit there for the taking. Hand wash was fixed to the shower wall, but how many tiny bottles of hotel shower gel do you really need? 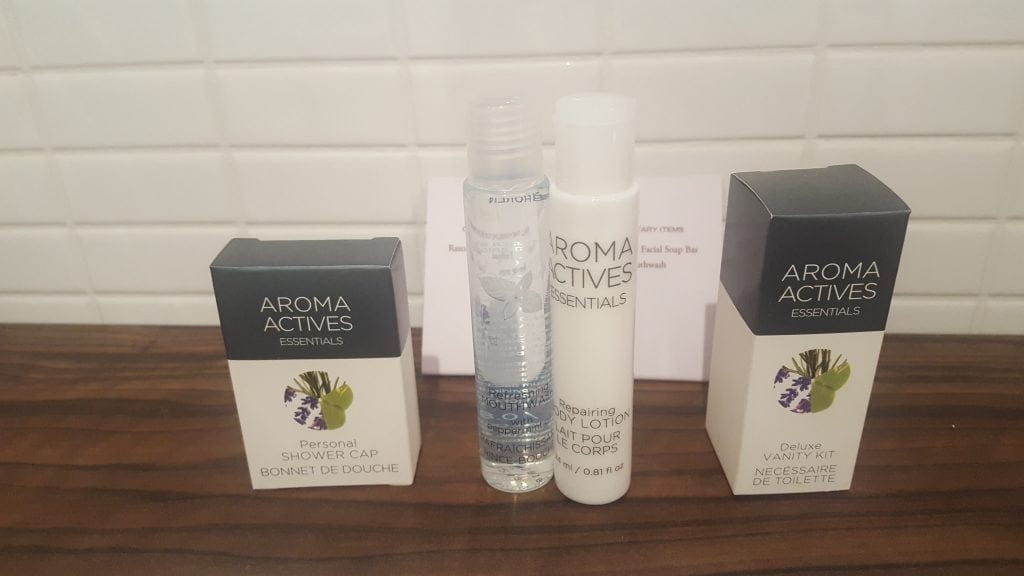 Woe betide anyone over a size 18 who wants to use the shower; it’s only just about large enough to fit little old me. Still, it was a solid showering experience, with the temperature and pressure spot-on without any need for laborious trial and error. After about 20 minutes of singing quite badly, it was lovely to see I hadn’t caused a minor flood in the bathroom.

Wi-fi requires your surname and room number, but after that, you’re let loose on t’inernet. You can upgrade your speed if you want, but for watching Netflix, researching your shopping buys online or checking in on Facebook, the free version works just fine.

My, what a spread there was. By the time we made it down to the restaurant, 20 minutes before the end of breakfast of course, I wasn’t expecting much to be left, but new trays of hot staple items like sausages, creamy scrambled egg, beans and hash browns were still being brought out. 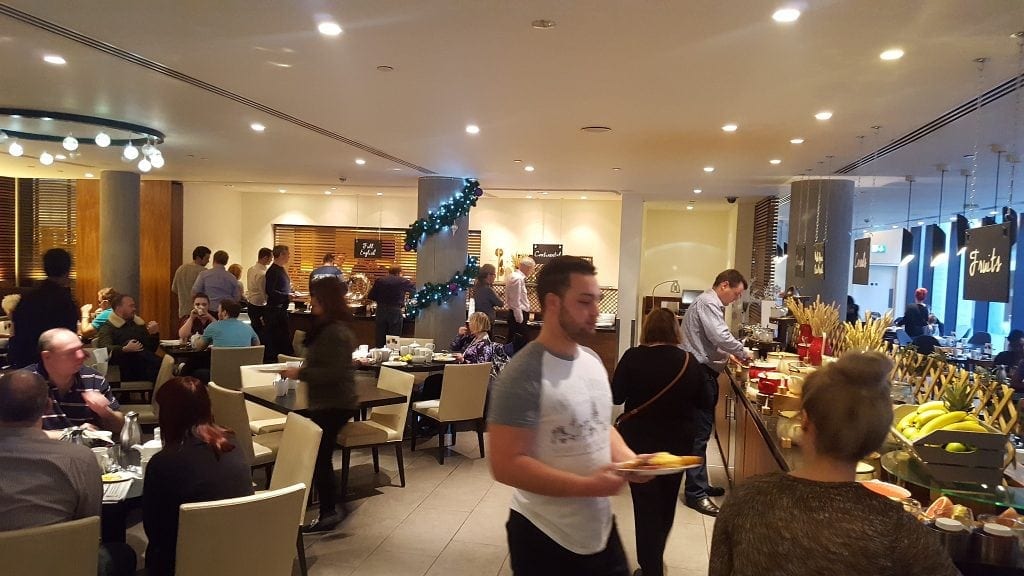 And it was deeelish, so much so that I had no space left for the huge range of fruit on offer or tempting pastries and muffins. My wiser and more restrained sis saved space for the double chocolate muffin though, with a gooey middle that made me regret my savoury greediness.

It’s London, dude, all the options are nearby. We started our night with a drink and nibbles at the hotel’s own Sky Lounge, the rooftop terrace bar which overlooks both the City and Tower Bridge. 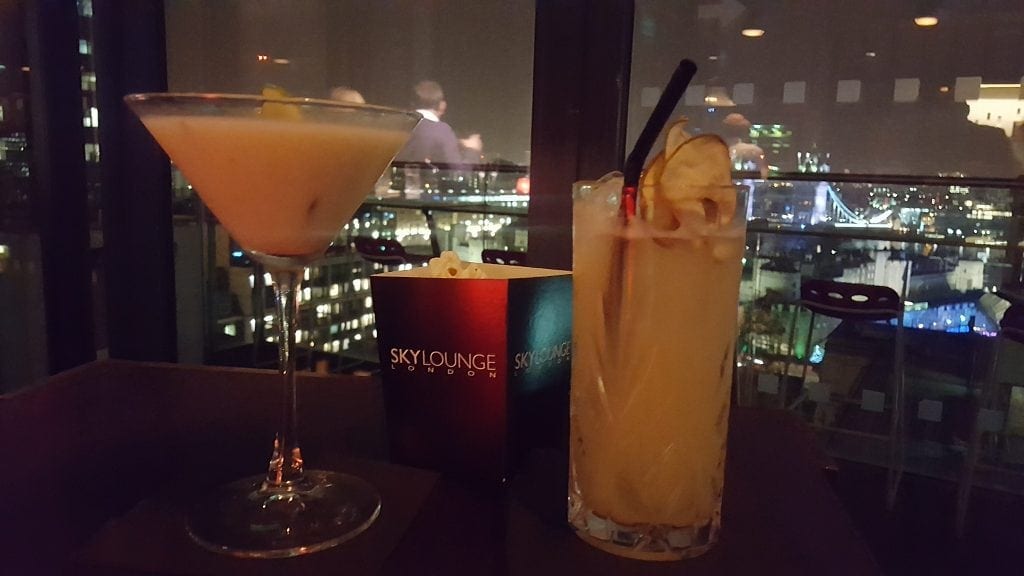 It was pleasantly busy at 8pm, though such is the relaxing nature and spectacular views that I bet in summer, each square centimetre is coveted real estate. Then came the discussion – what to eat?

Raymond Blanc’s signature Michelin-starred restaurant was nearby, but booked out obvs. Google told me Dishoom Shoreditch was busier than usual. By the time we left and walked around to survey our options, The Breakfast Club in Spitalfields was calling our name, so how could we say no? Good thing too, as we were served by the lovely new waiter off of First Dates, who was super cool. Highlight of the night, tbh.

It’s a conveniently located, high standard hotel which is ideal for a London getaway, if that doesn’t sound like an oxymoron. The rooms leave a little to be desired, but with so much going on in the hotel and even more around it, you’d barely notice.

To book with a 25% discount under the Hilton Winter Sale, visit www.wintersale.hilton.com. Valid for bookings made before 31 January 2017.