Everton legend Dixie Dean will have an iconic hotel named after him just yards away from The Shankly in the heart of Liverpool. The new £10 million football themed luxury hotel is being built in tribute to one of the greatest goal-scorers of all time and will sit across the road from it’s iconic sister […]

by Jack Peat
in Football, Travel 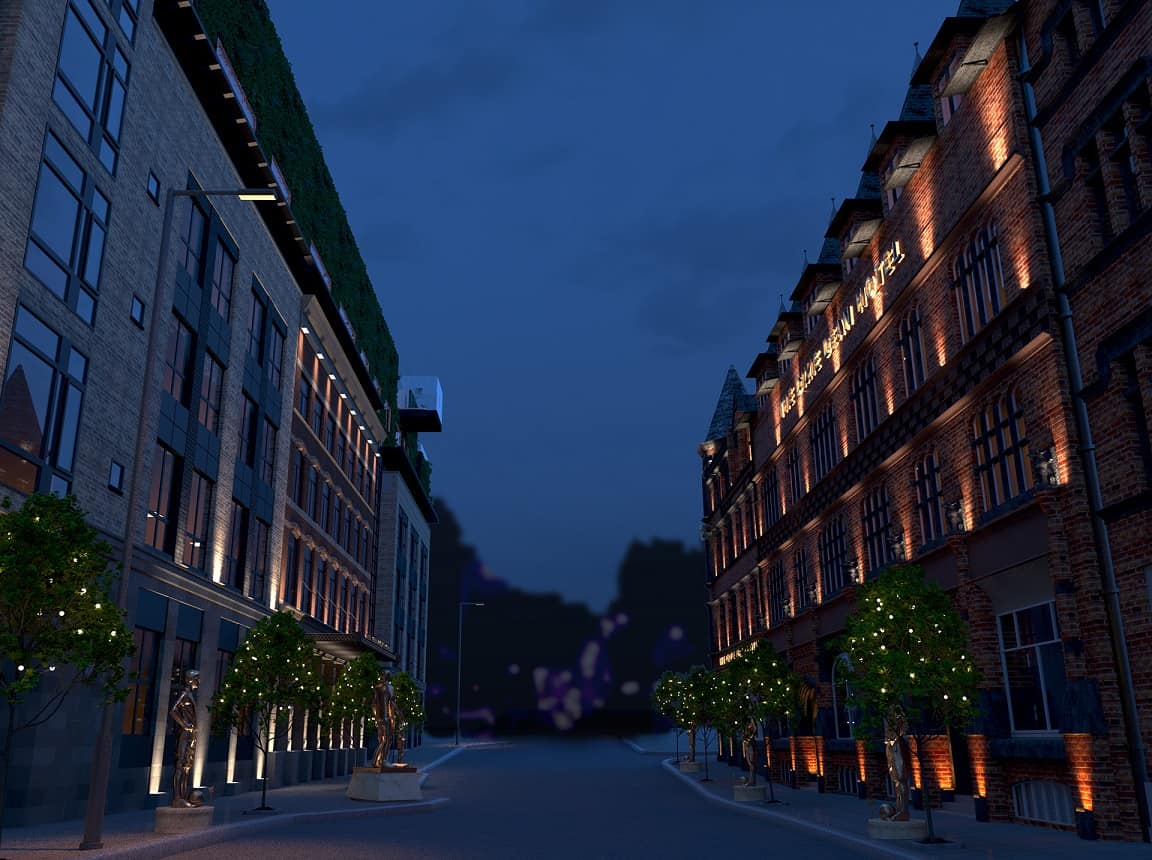 Everton legend Dixie Dean will have an iconic hotel named after him just yards away from The Shankly in the heart of Liverpool.

The new £10 million football themed luxury hotel is being built in tribute to one of the greatest goal-scorers of all time and will sit across the road from it’s iconic sister hotel The Shankly, which was conceived in tribute to the legendary Bill Shankly OBE.

Images of the Dixie Dean have been released as part of a teaser campaign ahead of the hotels restaurant and bar launch in May, with the hotel rooms being completed and launched in July 2019.

The 160 cover restaurant and bar – named “No 9” after the number worn by Everton legend Dixie Dean – showcases a very modern boutique style hotel which embraces the iconic past and Grandeur of the Grade II listed Gothic Jerome & Carlisle building.

The original full length windows of the building have been retained to ensure optimum light and air into the building. The bar and restaurant areas have a rustic industrial feel with original beams, wooden panelling and brickwork retained in a nod to the buildings Gothic architecture. Vibrant colours – including Everton FC Royal and aqua blue – feature throughout the interior with deep luxurious upholstered chairs, sofas and fabrics. Intelligent mood lighting highlights the innovative interior design and use of Gold and copper metals throughout. Images and memorabilia from the legendary footballer combine with subtle design cues in tribute to the life and career of Dixie Dean. 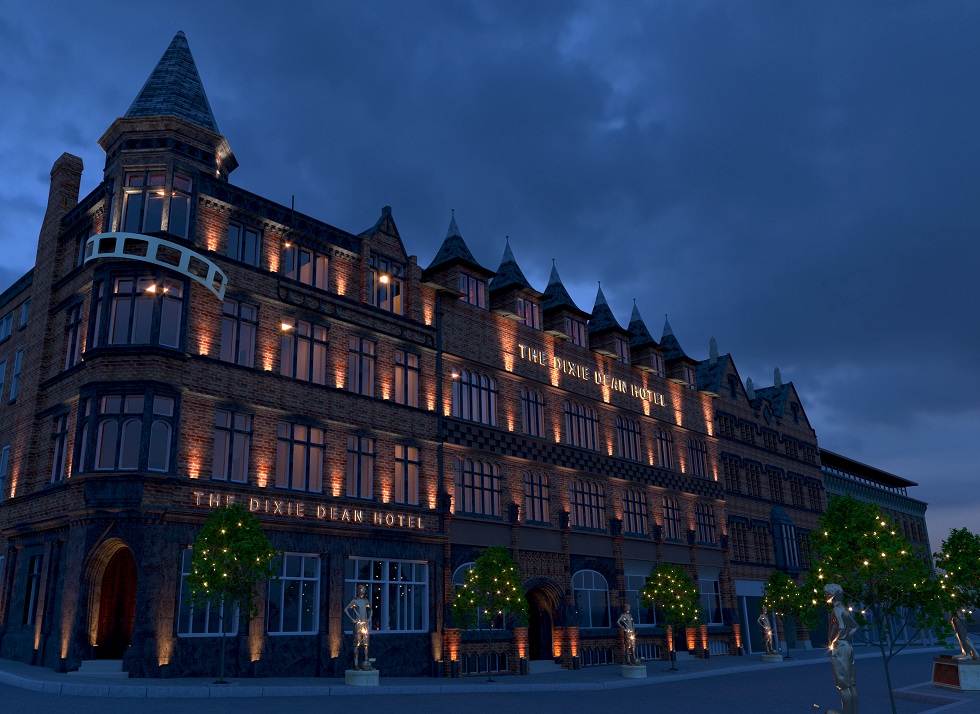 “No 9” will have an extensive menu which will include unlimited breakfast buffet, afternoon teas. lunch menu and an A La carte menu for the evening. The No 9 will stock premium spirits, a selection of wines and an extensive cocktail menu.

Dixie Dean and Bill Shankly were fiercely loyal to their clubs colours but off the pitch they were lifelong friends, a true testament to these Gentlemen of the beautiful game.

For the first time ever these two giants of the football world in Liverpool will stand side by side uniting the two clubs and proudly boasting the city’s first football quarter, the first of its kind in the UK. The hotels will become the landmark feature of the football quarter with a tree lined boulevard and golden statues in tribute to players from both Liverpool Football Club and Everton Football Club.

The hotel is a partnership between Lawrence and Katie Kenwright’s Signature Living Hotel Group, Barbara Dean and Melanie Prentice, the daughter and Grand daughter respectively of Dixie Dean.

The 100 bedroom hotel will offer restaurants, bars and an events space for weddings, as well as a museum of memorabilia and history dedicated to the footballing legend and his career. Dixie’s daughter Barbara Dean will also attend special events at the hotel to talk about her father and his phenomenal footballing career. 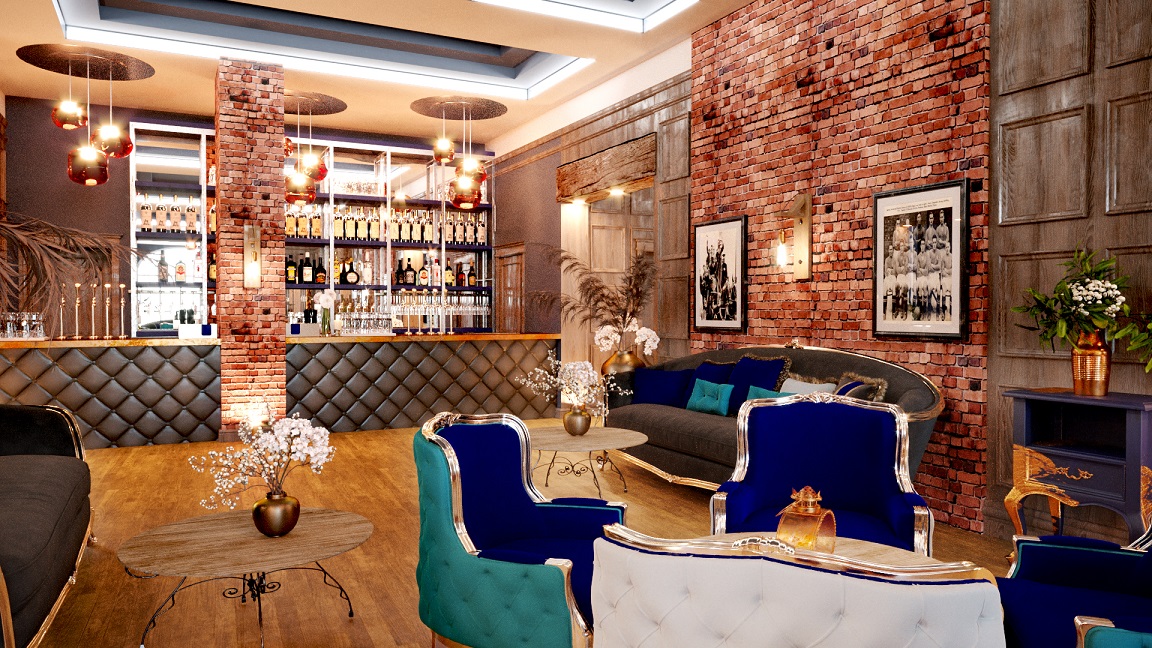 “It’s very exciting to see the images of how the restaurant and bar will look and take shape for the new Dixie Dean hotel. My Grandfather would really approve of the interior design and a hotel celebrating his life. If he were here now he would take a seat in the corner with a trusty pint of Guinness and have a laugh and a chat with the customers and fans coming to the hotel named in his honour.

This is a really exciting time for all of us, my mum Barbara, Dixie’s daughter is absolutely thrilled as we all are to see this idea become a reality. Working with Lawrence and Katie Kenwright and Chris Carline – Bill Shankly’s Grandson – has been a real pleasure and we are so excited for the future. Without their help and support we wouldn’t have been able to make this a reality.” 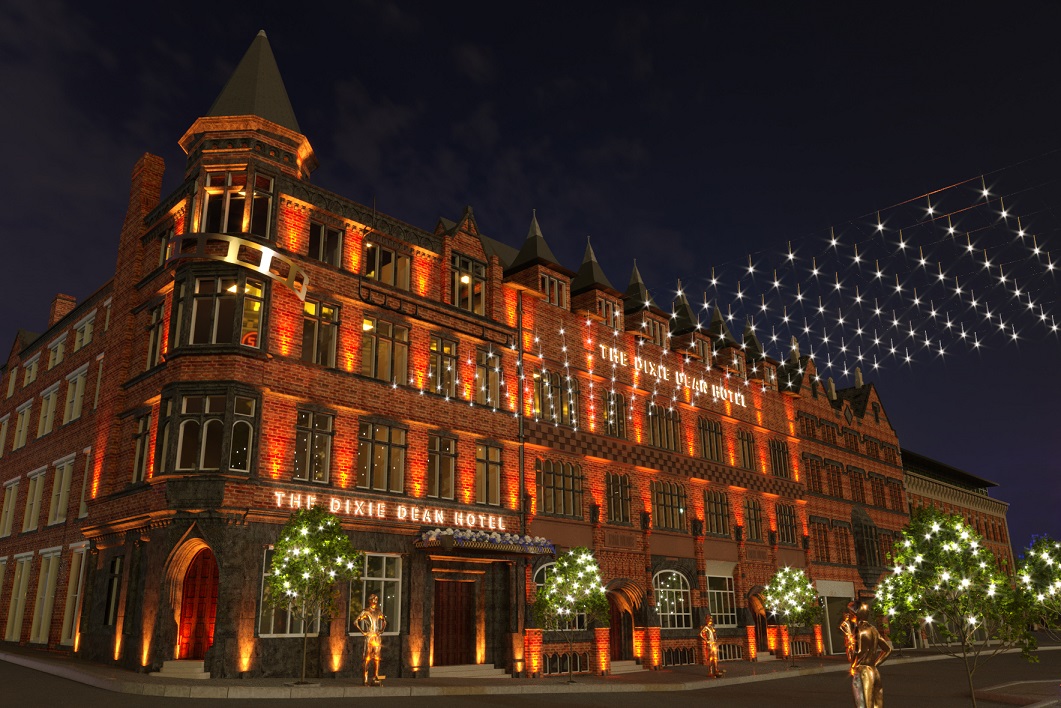 “Our goal was always to build two iconic hotels that would represent the two greatest football teams in English football and to leave a lasting legacy to Everton and Liverpool football clubs. What made this even more unique – was not only the locations of each hotel being across the road from each other – but that we had the full support and blessing of Dixie’s family, without that we would not have been able to do justice to the project. There is no better person to have than Melanie as our Guest Relations Director. She adds real gravitas to the hotel, she is passionate about Everton and passionate about continuing the legacy of her Grandfather.”

“The greatest centre forward there will ever be. His record of goalscoring is the most amazing thing under the sun. He belongs in the company of the supremely great, like Beethoven, Shakespeare and Rembrandt.”

The legendary goalscorer who scored 60 goals in a single season and 383 goals in his Everton career set the benchmark for such modern football icons as Lionel Messi and Gerd Muller and a record which still stands today.

The Dixie Dean Hotel will create a further 150 jobs within the hotel for the city and has created another 100 hundred jobs locally with tradesmen also working on the project. Signature Living continue to create jobs in the city and fly the flag for the city’s tourism and hospitality sector. The company which currently has 840 staff will rise to over 2000 staff in the next 2 years.