As part of a weekend in the Costwolds, my pal Laila and I spent a night at The Plough Inn, a charming pub, restaurant and B&B in the small village of Kelmscott (population: 198). Our expectation was high as en route from Swindon train station, our taxi driver told us that Kate Moss was recently […] 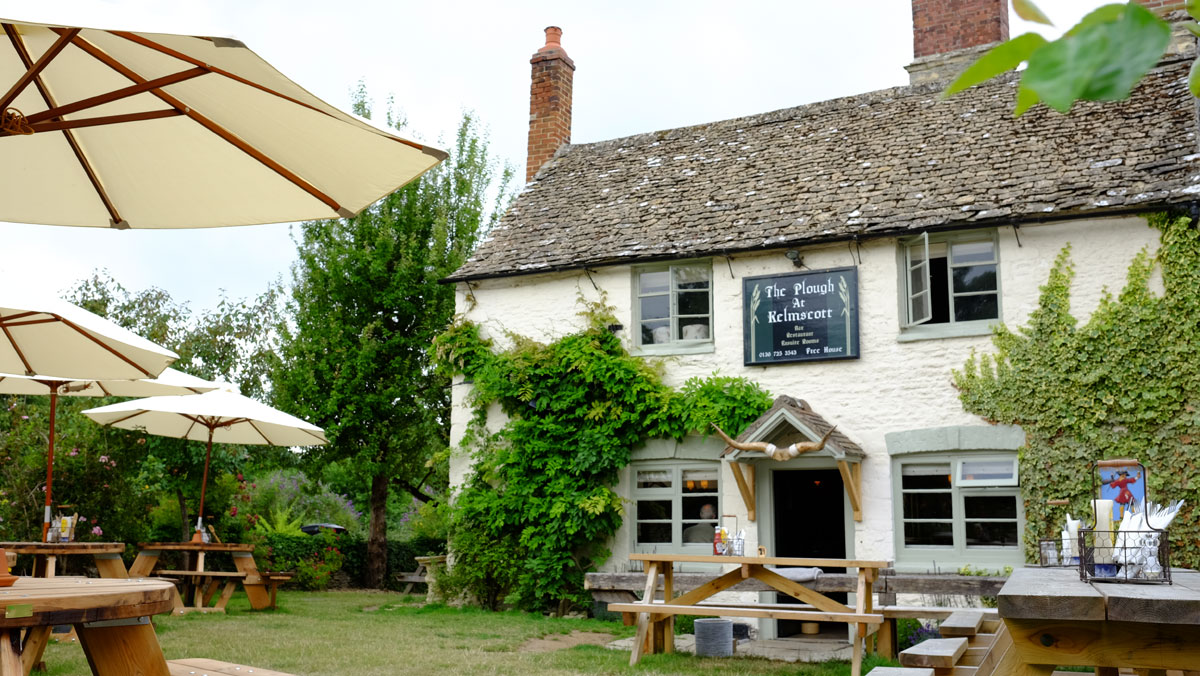 As part of a weekend in the Costwolds, my pal Laila and I spent a night at The Plough Inn, a charming pub, restaurant and B&B in the small village of Kelmscott (population: 198). Our expectation was high as en route from Swindon train station, our taxi driver told us that Kate Moss was recently in, bringing none other than Liv Tyler with her. But do they give every patron the VIP treatment? We find out…

Kelmscott is a quiet, cul-de-sac village with two B&Bs (the Plough included), a large manor, and an enviable community spirit. It’s small enough that everyone seems to know each other, but warm enough to make visitors feel welcome. Nature-lovers should have a little walk around the area: horses, ponies, cows and hens are all in the vicinity. Which makes a change from the tower blocks of London.

The shabby chic rooms are spread across the first floor of the bar and restaurant. The layout means the rooms aren’t the quietest; our room is right on top of the pub and facing the popular beer garden, which we found to be more of a problem in the day when we wanted a rest than in the evening when we joined in.

Still, it was comfortable and clean, with water provided – ideal as there’s no shops around for thirsty visitors.

The first sign that the Plough has the same owners as the Five Alls: it’s the same full-sized REN bottles that are low in the steabability factor but high in the desirability stakes. Oh, the temptation!

Not strong enough to stream Netflix, but good enough to check email and get #rustic #Cotswolds #staycation #BFFs on Instagram.

While the size of the bathroom meant you couldn’t swing, well, anything, the strength of the shower was heavenly. With a choice of a gentle rain shower head or strong shower head, it made whiling away a full hour far too easy.

The only other local food option is the tearoom at Kelmscott Manor, open for lunch and afternoon tea at very specific times, so basically it’s The Plough restaurant or The Plough bar. That’s no bad thing; the low-ceiling, wooden planked pub is a cosy place for a sandwich at lunch, and the restaurant is exactly what you’d be after in a country gastropub, with a contemporary, hearty menu, including a flavourful goats cheese salad with pomegranate dressing. Just look!

Despite being a busy night, the staff were attentive and patient. Which is what’s needed when picking from a lengthy menu of locally-sourced produce including steak, pork belly and rump of lamb.

The breakfast menu is the second sign that The Plough has the same owners as the Five Alls as it’s the same buffet and menu. No complaints, especially as I decided to go off-piste with a request for toast, beans and poached eggs, which miraculously had no runny white – just runny yolk (yuussss). And the coffee! Perhaps it was the late night or something in the water, but it was particularly delicious. All in all, it’s a no-fuss, very English breakfast which set us up perfectly for the countryside walk ahead.

The Plough is a centre of conviviality in an otherwise rural village. As such it’s not so great for a quiet retreat, but perfect to experience a typical weekend in the English countryside.

For more information, latest prices and to book, visit The Plough Inn’s website.

Also read our review of the nearby Five Alls, Filkins.