A strong technology sector, resilient financial system, fantastic talent pool and low business costs put Toronto on the global fintech map. Not only does Toronto boast housing the headquarters of major Canadian banks, but it also lays claim to 3 of the top 60 global pension funds and 7 of the largest global hedge fund […]

by Salman Khan
in Tech and Auto 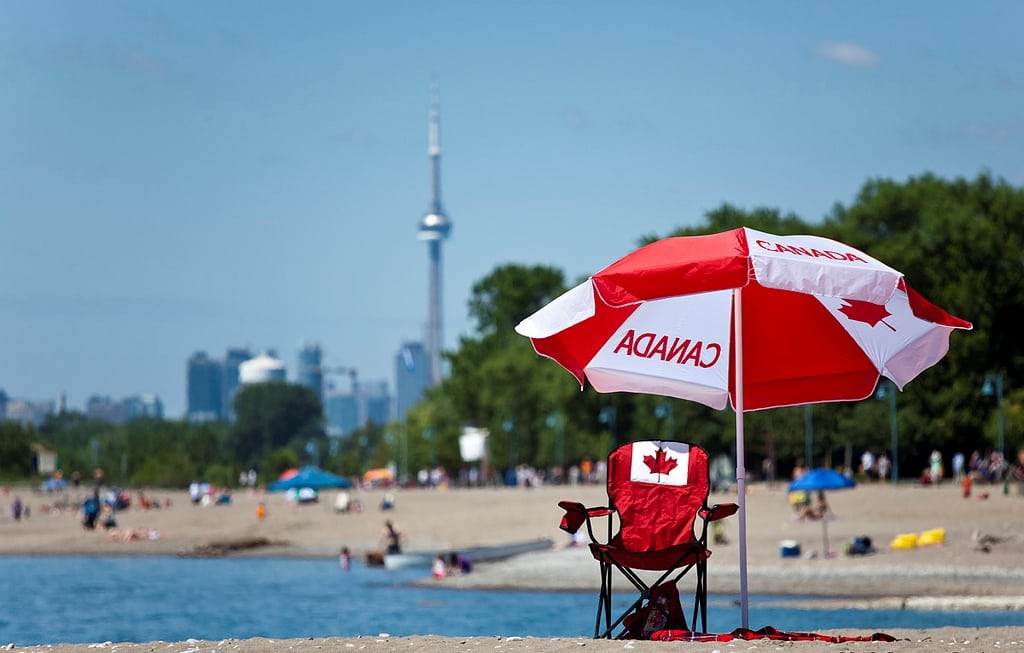 A strong technology sector, resilient financial system, fantastic talent pool and low business costs put Toronto on the global fintech map. Not only does Toronto boast housing the headquarters of major Canadian banks, but it also lays claim to 3 of the top 60 global pension funds and 7 of the largest global hedge fund administrators. The financial sector in Canada is expected to shell out $15 billion in technology spending by 2018. Toronto is the second largest financial centre in North America after New York, hosting around 12,000 financial firms and employing over 360,000 people. Since 2010, Canada has seen over 200 fintech start-ups cumulatively raise upwards of $500 million in funding. Big names making headlines include WealthSimple, SecureKey and League.

Despite all the fintech buzz in the media, a report released by the Toronto Financial Services Alliance (TFSA) earlier this month found that Toronto ranked in the middle of the pack after global fintech centres London, San Francisco, New York and Singapore. The report also highlighted that the investment rate in the Toronto region over the last 6 years is higher than that in Silicon Valley, New York and London – making it one of the fasting growing ­hubs globally. By supplementing Toronto’s current momentum with approaches similar to those adopted by the leading players, there is no reason why Toronto cannot move up the list.

Securekey and Wealthsimple are shining examples of venture-backed and award winning Toronto based fintech companies that have made it big. In fact, four Toronto based companies made the Fintech 100 List in 2016 – League, SecureKey, Overbond and Wealthsimple. WealthSimple is Canada’s fintech darling today- it recently secured another $50 million in funding from Power Financial.

The fintech industry in Toronto can be generally distributed across a number of major subsectors including financial management, peer to peer transfers, consumer/corporate alternative lending, and payments. If you look at the start-up participation in fintech, the payments segment is most prevalent followed by lending and back-office banking.

As fintech start-ups come up with innovative, more efficient and less expensive ways of providing the same products and services to consumers, banks are beginning to pay attention. In their attempt to stem the outflow of business, banks are now embracing fintech by either developing in-house fintech hubs or partnering with fintechs. An example of an in-house fintech hub is Scotiabank’s Digital Factory that operates as a fintech incubator tasked with creating digital solutions for its 23 million customers. On the partnership side, CIBC, RBC, National Bank of Canada, BMO and Scotia Bank are partnering with Ripple Labs, based in San Francisco, to speed up cross-border payments using blockchain technology. BMO, seeing the potential of innovation in financial services, has partnered with DMZ to launch a fintech accelerator. Such partnerships contribute to the development of a Toronto’s fintech hub and in turn drive VC interest that is critical for growth of the sector. For example, Toronto-based Impression Ventures recently raised $30 million to fund fintech start-ups.

Canadians are early adopters of mobile payments technology thanks to a 76% adoption rate of smart phones today which is expected to hit 90% by 2020. Almost 30% of smart phone users are using them for payments. Between 2014 and 2016, there was a 20% surge in number of consumers using banking apps to check their accounts. Canadian Payments Forecast estimates total payments market in Canada was worth 20.9 billion consumer and business transactions worth more than $8.9 trillion in 2015. According to Moneris, Canada’s largest processor of credit and debit payments, 85% of its clients have NFC enabled terminals that accept payments via contactless debit cards, credit cards and mobiles apps like Apple Pay. Recently, Google’s mobile wallet, android pay, launched in Canada in partnership with major banks and will empower users to pay with their smartphones. Google’s VP of Payment Product, Pali Bhat put it well when he said “Canada is one of the most advanced countries in terms of mobile payment readiness across the world..”.

Toronto is home to several world renowned accelerators and incubators including DMZ, MarS and OneEleven. DMZ, which is based out of Ryerson University was ranked the best amongst 60 North American initiatives by UBI Global, a research organization that benchmarks incubation programs. It has incubated over 260 start-ups from different verticals, including fintech, was also recognized for being most supportive of fintech start-ups in Canada in the 2016 Fintech Awards. OneEleven, an accelerator that targets post-seed start-ups is anticipating so much growth in the start-up space that it has moved out from its 15,000 square foot and partnered with Oxford properties to move into a 250,000 square foot building. MaRS is a 1.5 millions square foot facility comprising offices space and research labs and was home of many success stories including WealthSimple and Smooth pay both of whom were initially based out of MaRS’ dedicated fintech cluster.

The Canadian government is taking innovation seriously as was indicated by the federal budget released in March this year. Almost a billion dollars was set aside for development of innovation super clusters around the country. The budget pledges support for businesses that are innovating to make financial services more accessible to the masses. In the government’s efforts to promote financial innovation, the budget also hinted towards making regulatory concessions which is a big deal for fintechs. The province of Ontario, not to be left behind, revealed a budget that included the goal of developing Ontario into a global leader in financial services, creating jobs and investments in fintech and maintaining consumer and privacy protection. Just this week, the Canadian government also launched a fast-track visa program to help Canadian companies scale by attracting top talent from around the world.

The Toronto Financial Services Alliance (TFSA) is a public-private partnership created to grow the Toronto regions financial services cluster. The TFSA works with all levels of government, industry and academia to cultivate stakeholder collaboration in the industry and promote the Toronto region internationally as a global financial hub. To generate awareness about the growth of fintech in the Toronto region, the TFSA commissioned a report titled “Trends and Innovations in Financial Services” earlier this year. More recently, the TFSA released a report on fintech ecosystem in Toronto and outlined actions necessary to make Toronto a global leader.

Regulators Warming up to Fintechs

Although Canada is trailing London and Singapore when it comes to robust regulatory frameworks that support fintech innovation, the wheels of change are in motion as regulators are budging from their usual positions. Based on developments in the fintech sector in Ontario, the Ontario Securities Commission (OSC) is following in the footsteps of the UK in an attempt to develop a safe yet innovative regulatory environment. The OSC unveiled the OSC Launchpad late last year – the first fintech focused innovation hub Canada, to support fintechs in staying on the right side of regulatory compliance as they design financial products for Ontario’s investors. The OSC Launchpad follows the same approach taken by the UK based FCA which kicked off Project Innovate in 2014. Lending Loop and Vault Circle are two Toronto based companies that are riding this shift in policy and have recently been approved by the OSC to operate their lending platforms.

Another step in the right direction by the OSC was the creation of the Fintech Advisory Committee in early 2017 to guide the OSC on the ins and outs of the fintech industry. The OSC Launchpad has attracted so much interest from emerging fintech businesses that it is looking beyond Ontario for its members. In February this year, the OSC and the FCA inked a co-operation agreement to support each other’s members navigate regulations in their markets. Late last year, the OSC signed a similar deal with ASIC, its Australian counterpart. The Competition Bureau, which is tasked to ensure consumers and businesses operate in a competitive and innovative marketplace is already working on a study on the Canadian fintech ecosystem with the report expected to be released in late 2017. The above developments suggest that regulators in Ontario are not only warming up to fintech innovators but also working to open doors for them globally. But let’s not get carried away with this just yet– this is just the beginning of the struggle to ease regulatory burden. Ontario, hopefully, can lead the way for the rest of Canada to follow in its footsteps.

The Global Fintech Hubs Federation (GFHF), a network of emerging and established fintech hubs increased its membership from 20 to 44 since September 2016. The more than doubling of members at GFHF in an indication that fintech has truly gone global. As populations in the rest of the world gain access to mobile technology, entrepreneurs are coming up with innovative fintech solutions that governments are nurturing by investing in them and easing regulatory restrictions. Fintech leaders including New York, London, Singapore and Hong Kong, are now being trailed by the new kids on the block – Abu Dhabi, Kenya Istanbul and Jakarta. Despite the competition, Toronto can dig deep and establish itself as a leader. Partnerships between banks and fintech start-ups, VC money, support from stakeholders, talent and an increasingly friendly regulator are all good news. However experts say the scale of these activities must be magnified for Toronto to remain competitive. Toronto has another trick up its sleeve that competitors don’t – artificial intelligence – start-ups in Toronto have the luxury of benefiting from the local artificial intelligence ecosystem. Inevitably, what is required is the perfect amalgamation of all of Toronto’s strengths strung together by a well thought out strategy. The strategy must come from the government, as has been the case in other successful fintech hubs. The ball is in Canada’s court.