Along with organophosphates that are added as a lubricant to aircraft engine oil, over 120 other toxic substances including insecticides and flame retardants, have been detected. 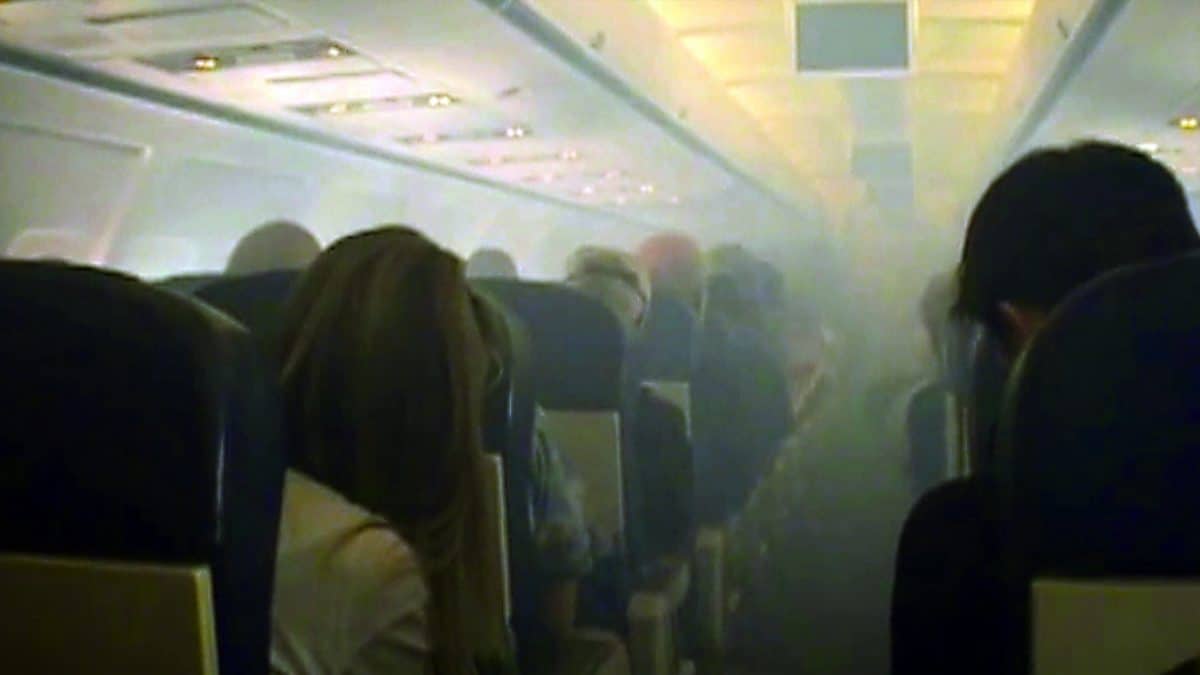 Frequently flying travellers and aircrew are as we all know stuck in a sealed space without the option to open a window or go outside. But are they unknowingly in danger of inhaling toxic pollutants, sometimes for hours on end?

The World Health Organisation has recognised indoor air pollutants and their detrimental health effects as a major environmental health risk.

Modern jet airliner ventilator systems are designed for optimum efficiency, leaving them exposed to lapses in the recycling of clean air and the blocking of fumes from jet engines entering the aircraft cabin areas.

Along with organophosphates that are added as a lubricant to aircraft engine oil, over 120 other toxic substances including insecticides and flame retardants, have been detected by EASA, the European Air Safety Agency. This chemical cocktail can create what has been described as ‘aerotoxic syndrome’ following exposure – a set of health conditions people have suffered that have been linked to toxins in air cabins.

In 2004 the Civil Aviation Authority (CAA) examined two contaminated cabin air supply ducts from two different airplanes and analyzed them for the presence of chemical constituents and degradation products of engine oils, hydraulic fluids and lubricants.  The inner surface of the ducts was found to be coated with black particulate material. In their report they stated that the microscopic examination of this carbonaceous material determined that it was rich in various elements, such as aluminum, silicon, sulfur, and phosphorous.

Referring to precisely those findings, Dr. Arvind K. Chaturvedi notes in his report for the Federal Aviation Administration (FAA) back in 2011: “In other words, the chemicals found in the carbonaceous material may not necessarily be individually toxic at the found concentrations, but if they are mixed together at those concentrations, the mixture might be highly toxic.”

The interaction of chemicals also plays a crucial role in exhibiting characteristic odours, which are generally described as ‘smelly feet’ or ‘wet dog’ smells, which may not necessarily be consistent with the odour exhibited by an individual chemical itself.

Dr. Chaturvedi says, referring to the CAA report: “The issue of the interaction of chemicals in regard to the toxicity of mixtures has apparently not been fully addressed or emphasized in the report.”

Impairments of flight and cabin crew and passengers

The German Federal Bureau of Aircraft Accident Investigation (BFU) stated in their own cabin air quality report in 2014:

“This study shows that fume events with health impairments of aircraft occupants did occur.”…and …”There are clear indications of impairments of flight and cabin crew and passengers.”

They say that especially cabin crew who are also responsible for passenger safety should be protected against hazards in the workplace.

However, astonishingly, the cabin crew do not have oxygen masks available, unlike the flight crew who have access to full-face oxygen respirators. Not to mention that there is nothing prepared for passengers at all. The overhead oxygen masks are only released and intended for use during a so called ‘rapid decompression’, not when smoke or fumes are present, since they supply a 50/50 mixture of oxygen and cabin air.

The BFU warned that a product which has received a type certificate by EASA should be designed in a way that neither crew nor passengers are harmed or become chronically ill.

“Aircraft, engine and APU type certification should include a direct demonstration of compliance of all substances liable to cause cabin air contamination. Certification should be based on critical values which preclude permanent adverse health effects on passengers and crew.”

On occasions, aircrew and pilots have felt so overwhelmed by fumes, some to the point of incapacitation, that they have had to make an emergency landing, and were subsequently taken to hospital for examination. Many aircrew remain severely ill and never return to their jobs.

Although causation has been proven in numerous lawsuits past and present brought by airline employees and passengers, the airline industry refuses to acknowledge the problem despite numerous scientific studies and ignores entirely the above mentioned aviation authorities’ reports, never mind the countless victim testimonies.

It is surprising that, to date, no substantial efforts have been made by governments or the industry to establish the levels of chemical contaminants which enter the aircraft during an actual fume event or to establish the impact of cumulative, low-level exposure over time.

The injury might be preventable if contamination detection and air filtration systems were installed in all commercial aircraft, but there are no regulations to this effect. While the existence of a relationship between contaminated cabin air and ill-health may be a potentially expensive and inconvenient truth, the costs of ignoring the possibility of such a relationship are very much higher.

EasyJet and Spirit Airlines announced in 2017 that they would be fitting new filtration systems. Hopefully other airlines will follow suit.

The ongoing debate around cabin air quality highlights the importance of being aware that in addition to viruses and bacteria, also formaldehyde, carbon dioxide, carbon monoxide and other highly toxic contaminants can be present inside airplanes.

The comparison the industry likes to make is  that “the aircraft cabin air is as healthy as that of kindergarten’s indoor air”. However, it should be pointed out that no safe threshold can be determined, and all indoor exposures are considered relevant to health, as stated by researchers in a study for indoor air quality in urban and rural kindergartens.

One could say that the airline industry actually has almost quietly admitted that the problem exists by introducing the Boeing 787 which does not use bleed air, with a separate air intake to that which serves the aircraft engines.

But in every other design of passenger jet, cabin air is a mix of recycled air and compressed air drawn from around the engines – known as ‘bleed air.’

Seals are not perfect and fumes from the superheated lubricants and other chemicals sometimes leak through into the cabin air, either barely perceptibly, or spilling into the cabin in a cloud in ‘fume events’ reported on passenger jets on a regular basis.

A sensible next step for the aviation industry would be to at least use sensors that warn the crew of polluted non-breathable air and try, as well as improving the filtration. This should be mandatory – which is not easy to achieve in view of the many forms of gaseous fumes and chemicals involved.

In the meantime, the new travel accessory in your hand luggage should be a high-quality pollution mask.

By Bearnairdine Beaumont , former Chief Purser and author of THE AIR I BREATHE – IT’S CLASSIFIED and a new book – TOMB IN THE SKY.

More science and testimonies can be found here:www.aerotoxicteam.com