The Range Rover Sport SVR has presence in spades and serves up a large dollop of theatre. Big, brash, bulky and loud, it certainly makes a statement 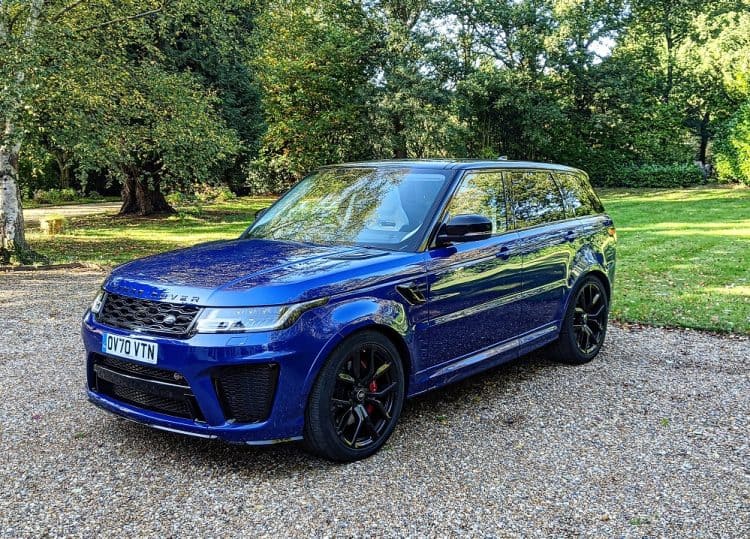 Cars act as an extension of ourselves. Each one says something about the person driving it. That’s a good thing. Buying something like a car, usually an expensive purchase, should have a bit of emotion attached to it. If you’re spending big bucks, it stands to reason that you should, at the very least, be happy and a little enthusiastic about it. The Range Rover Sport SVR certainly fits the bill.

Big, bulky, brash SUVs, of course, aren’t to everyone’s taste. But there’s no denying their appeal. People love them. The week I spent in the Estoril blue Range Rover Sport SVR confirmed as much. I saw thousands of other Range Rover Sports and no shortage of other Estoril blue Range Sport SVRs. The optional 22” gloss black wheels and privacy glass were options everyone else had ticked, too. There’s no escaping it – this is a popular performance SUV.

The Range Rover Sport SVR: a car for all occasions?

The other thing that struck me, besides its obvious popularity, is how well the Range Rover Sport SVR blends in. That might sound a little strange for big, bulky, brash SUV, but it never felt out of place.

In the week I had it we took our two-week-old son to a wedding Suffolk. Plenty of people questioned our sanity. A 300+ mile round trip for a two-night stay with a new born? It does actually sound mental looking back, but the Range Rover Sport SVR played a big role in giving us the confidence to go. At least we’d get everything in. Babies require a lot of stuff, so having a big car was a bonus.

On the drive out, the Range Rover slotted in perfectly everywhere we went. I live in Surrey, an area in which the Range Rover Sport SVR has been something of a hit. One drive along Weybridge high street saw two other such cars. Yes, both in Estoril blue. With the optional 22” wheels. And the privacy glass.

Similarly, in Basildon, on route to Suffolk, the presence of other Range Rover Sport SVRs was noted. Cynics will no doubt pass comment on the tastes of the residents of Weybridge and Basildon, perhaps not unfairly. I did not, however, feel out of place. Nor did I when I arrived in the idyllic countryside of Suffolk. The Range Rover brand feels very much at home in this setting. As it also does in towns in cities. The marque has done an extraordinary job on broadening its appeal from farmhouse to opera house down the years.

It’s popular, but is the Range Rover Sport SVR any good?

Popularity doesn’t automatically mean quality (for reference, see Coldplay). So, is the Range Rover Sport SVR all style and no substance? Well, it certainly packs a punch. The supercharged 5.0-litre V8 sends it from 0-60 in just 4.3secs. The mid-range pick up, too, is extraordinary. A quick squeeze of the right foot, even in comfort mode, and it heads for the horizon with gusto.

Then there’s the sound. The quad exhausts are always happy to join the party and make the presence of the V8 felt. If you like a sense of theatre, the Range Rover Sport SVR certainly delivers. From the pleasing rumble on start up to the throaty roar at full chat, the exhaust system deserves a doff of the cap. Even if this isn’t your sort of car, it’s certainly your sort of exhaust.

It’s not all thunder and no lightning, though. With 575hp to call upon and 700Nm of torque, the Range Rover Sport SVR performs the way it looks. That is to say, it’s not quiet, discerning or underwhelming.

You’ll become addicted to prodding the engine into life just to hear it sing. If people don’t see you in this thing, they will certainly hear you. Hit a decent B-road and it’s possible to enjoy yourself. The brakes, quite necessarily, do a great job in keeping things under control. On exiting bends, there’s just so much power to keep you hustling along.

What about living with a Range Rover Sport SVR?

Of course, the performance factor is only one element of a performance SUV. A car like this will see regular use. Commuting, school runs, long trips away and everything in between. It’s a fine environment in which to spend plenty of time, so it will fit the lifestyle choice nicely.

The cabin is bright and airy, with plenty of space for front and rear passengers. The full-length panoramic roof also makes it feel like there’s more room than there is. It’s a really nice feature which comes as standard.

The Range Rover Sport SVR is an ocean of soft leathers and soft carpets; the interior is well appointed. The infotainment is easy to use and simple to get to grips with. Connecting your phone is straightforward. The controls on the steering wheel, whilst taking a moment to get to grips with, are well judged and there is all manner of customisable information for the driver. Having the adaptive cruise control functions on the steering wheel is another big plus, as it’s easily accessible.

Storage compartments are abundant, too. Cup holders, three door bins, two glove boxes… no complaints. Which leads on to the only compliant. The ride is a little confused and contradictory. It’s simultaneously too stiff yet too wallowy. The Range Rover Sport SVR clatters over speed bumps in a rather unexpected way and shares all the road’s imperfections with you. Yet there’s also a lot of body roll, which you’d expect of an old school Range Rover. A couple of passengers noted how they were looking for something to grab hold of to stabilise themselves under heavy acceleration, as the car doesn’t always feel entirely composed. The ride has certainly been sacrificed at the altar of performance.

The ride quality, however, is by no means a deal breaker. You could live with it. You’d get used to it. The pros of the Range Rover Sport SVR certainly outweigh the cons. It’s easy to use and adapt to for any driver. It has plenty of creature comforts and helpful tools such as park assist.

It also has a distinct image. That, ultimately, is what you’re getting with the Range Rover Sport SVR. It has presence is abundance and an equal measure of theatre. If a car should at least in part be an emotional purchase, this doesn’t disappoint.

If you’ve got a family and space on the drive for one car that needs to fulfil a broad mandate, the Range Rover Sport SVR is an obvious choice. Spacious and practical; fast and loud. You can drive it round your local town or take it off road. Granted, 99.9% of these won’t see anything more treacherous than a muddy carpark, but the breadth of capability is most certainly there. There’s something comforting in that. It covers every automotive ‘what if?’ scenario.

There’s undeniable appeal here. On a long drive back from Suffolk with a weary head, it was refined and relaxing. Just what the doctor ordered. And, if nothing else, there’s that exhaust. Even if it did wake up the baby. Sadly, for him, with the phasing out monstrous V8s and combustion engines altogether, it’s a sound that won’t accompany too much of his life. If this car hits the mark with you, enjoy it while you can.