Earlier this week, a bus was burnt out in Newtownards in an attack politicians linked to loyalist opposition to the protocol. 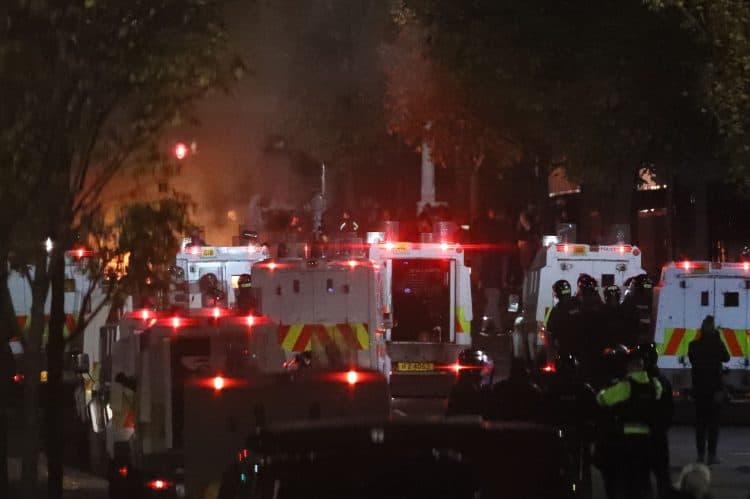 A senior PSNI officer has called for those behind Northern Ireland Protocol protests to reduce tensions after a group of up to 100 youths attacked police following a rally.

Chief Superintendent Darrin Jones said he was “saddened” by scenes in which police were attacked with missiles and fireworks close to a peace line in Belfast on Wednesday evening.

The disorder came on Lanark Way in the loyalist Shankill Road area. There was also disorder on the nationalist Springfield Road side of the peace wall.

Two boys aged 12 and 15 were arrested on suspicion of riotous behaviour and have since been released on bail as police inquiries continue.

No officers or civilians were hurt, but three PSNI vehicles were damaged and have had to be taken off the road.

He said: “At one stage there were up to 100 people on both sides of the interface attacking police officers.”

Referring to the two arrests, he said: “It is shocking and will have life-changing consequences for those children.

“Most of the crowd who were attacking police, and attacking them in a sustained way with bottles, masonry, fireworks, were from that age, about early teens to early 20s.

“What happened was the protest itself was peaceful, but once it did go in, the onlookers then who had gathered they put their attention to police and attacked the police.”

The senior officer said he is concerned about future protests against the protocol.

“Everyone has the right to protest and we have an obligation to facilitate protest, but there is a time and there is a place and the organisers must have reasonably expected what would happen when the protest was there.

“I would appeal to the community, those with influence in the community to use that influence positively to make the right decisions, try and reduce tensions in the area and appeal for calm.

“Many of those officers who were attacked last night were from the local neighbourhood teams.”

Earlier this week, a bus was burnt out in Newtownards in an attack politicians linked to loyalist opposition to the protocol.

The attack in the predominantly unionist area happened on the day set by the DUP earlier in the autumn to pull down the institutions at Stormont if major changes to the protocol had not been secured.

It was condemned by unionist leaders.

The DUP has not yet withdrawn ministers from the Executive, insisting progress is being made in efforts to dismantle the contentious Irish Sea border.

Opposition to the protocol that has created trade barriers between Northern Ireland and the rest of the UK was a factor behind rioting that flared in several loyalist areas across the region in April.

Related: Anger over France ‘grumpy’ in October comment from Rees-Mogg