by Ben Gelblum
in Tech and Auto, Technology 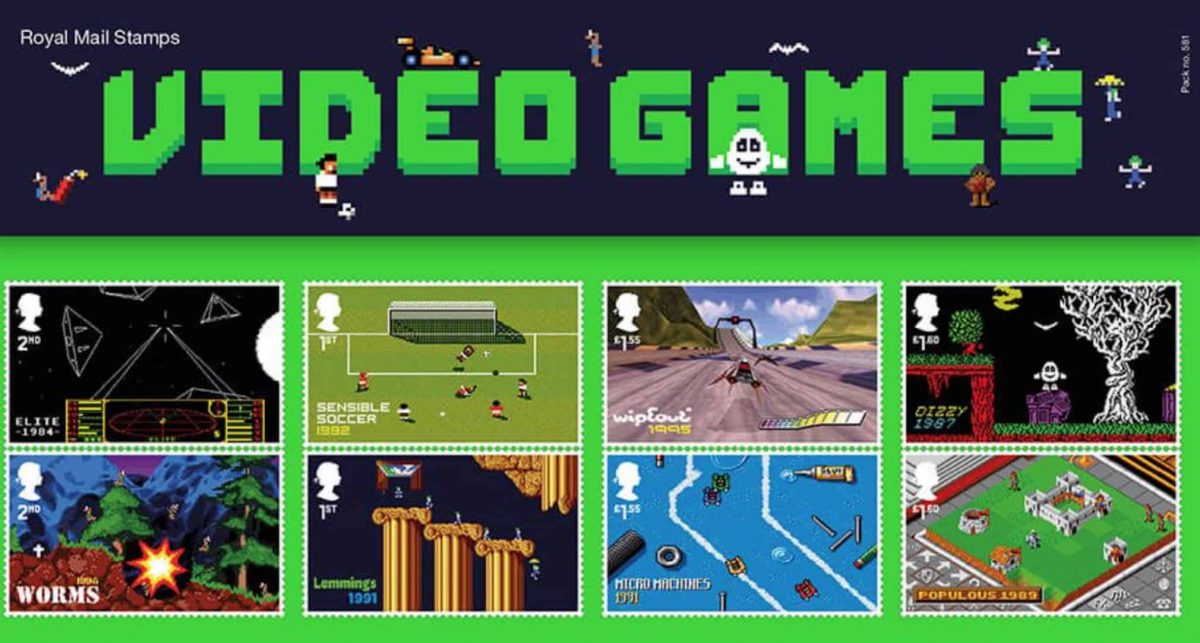 Influential UK-designed games from the 1980s and 1990s are being celebrated by Royal Mail in a new set of 12 stamps.

Tomb Raider, which was created by developers in Derby and went onto to became a global franchise selling more than 74 million copies worldwide, is among the country’s selected creative successes.

“The UK has been at the forefront of the video games industry for decades,” said Royal Mail’s Philip Parker.

“In the 1980s and 90s young designers grappled with coding on the new microcomputers and set the template for the industry with iconic games.

“We celebrate some of their landmark creations on stamps.”

“This collection celebrates a selection of the great British video games that have helped define both the national and global development scene over decades,” said Ukie chief executive Dr Jo Twist.

“Video games are a key part of our cultural footprint and we’re pleased to see their contribution recognised in such memorable style.”

The set will be available in a presentation pack for £14.25, to pre-order online or buy in Post Offices from January 21.

Developed by Sensible Software and first released for Amiga and Atari ST computers in 1992 as well as for the PC, Sensible Soccer featured a zoomed-out bird’s-eye view, unlike football games that had preceded it with closer views. With editable national, club and custom teams, the influential football game was listed as one of the 10 most important video games of all time by a committee of US games experts, and became a classic timewaster for many around the world.

Worms was a 2D artillery tactical video game developed by Team17 and released in 1995. The game was originally created by Andy Davidson as an entry for a programming competition run by the Amiga Format magazine. It did not win, but an Amiga format was followed by Playstation, Nintendo, Atari and a successful series of Worms games that kept updating the cartoonish violence.

Before Sims and Minecraft came Populous, the pioneering building game of 1989, the award-winning videogame has been voted among one of the most important games of all time.

1987’s Dizzy was one of the most successful and well-loved British games of its era.

Originally created for the ZX Spectrum and Amstrad CPC, the series appeared on multiple home computer and video game console formats. Dizzy, teh adventure-loving egg solved puzzles and collected interesting objects in over a dozen games being published between 1987 and 1992.

The anthropomorphic egg somersaulted and rolled around the fantasy landscapes saving the Yolkfolk, often from the schemes of his nemesis, the evil wizard Zaks.

Decades of adventures for Lara Croft began in 1996, with what became a template for many 3D adventure games and teenage crushes.

1984’s iconic space-trading game originally made for BBC Micro and Acorn Electron, changed computer gaming forever. Using a tiny amount of memory, players could while away hours exploring the vastness of space. This was the first genuine 3D game where players navigated a spaceship through galaxies.

1991’s ground-breaking toy-racing game Micro Machines was a cult coup for the Nintendo Entertainment System (NES) and was maddeningly addictive.

Last, but not least, another bizarre British classic – Lemmings.

Before Brexit, there was Lemmings – the ever more complicated game in which you had to stop lemmings falling off a cliff edge to oblivion.

Published by Psygnosis for the Amiga in 1991 and later ported for numerous other platforms. The game was programmed by Mike Dailly and David Jones, and was inspired by a simple animation that Dailly created while experimenting with Deluxe Paint.

Many adults who whiled away many hours on these classic games are getting rather nostalgic unsurprisingly.