The clip was captured by Hampshire Fire and Rescue Service and shows how officers bravely removed the snake with their bare hands. 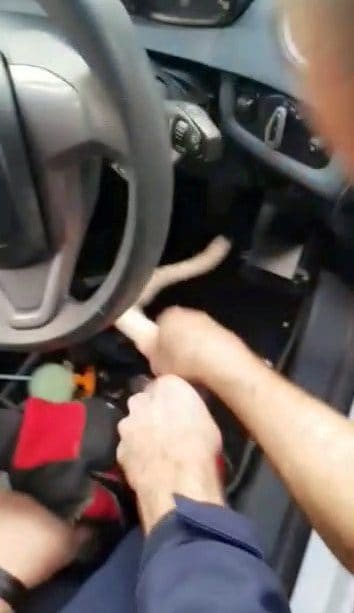 Firefighters have filmed the moment they rescued a rattle snake that was hidden inside a car dashboard.

The clip was captured by Hampshire Fire and Rescue Service and shows how officers bravely removed the snake with their bare hands.

It was hidden behind a car’s steering wheel in Eastleigh, Hamps, yesterday morning after sneaking away from its owner.

Fire firefighters were called to rescue the reptile yesterday (9) by a woman whose pet snake had escaped.

She had only owned the corn snake for a day when the constrictor slithered from its box whilst being driven home.

The woman attempted to retrieve the animal herself – using a dead mouse to entice it out – before pulling up at the fire station as a last resort.

Using a snake-eye camera, firefighter Jason Ralph and watch manager Daryll Pynigar were unable to reach inside to reach the snake inside the dashboard of the white Ford Fiesta.

So they hatched a plan to lure the snake out – using the car’s heating system.

Under the advice of animal rescue tactical advisor, Kevin Baker, crews turned the heating on in the car and within half an hour, the snake poked its head from the dashboard in search of colder air.

After the removal of a few panels, the snake was successfully recovered and placed into a bag where it was left in the care of its new owner.