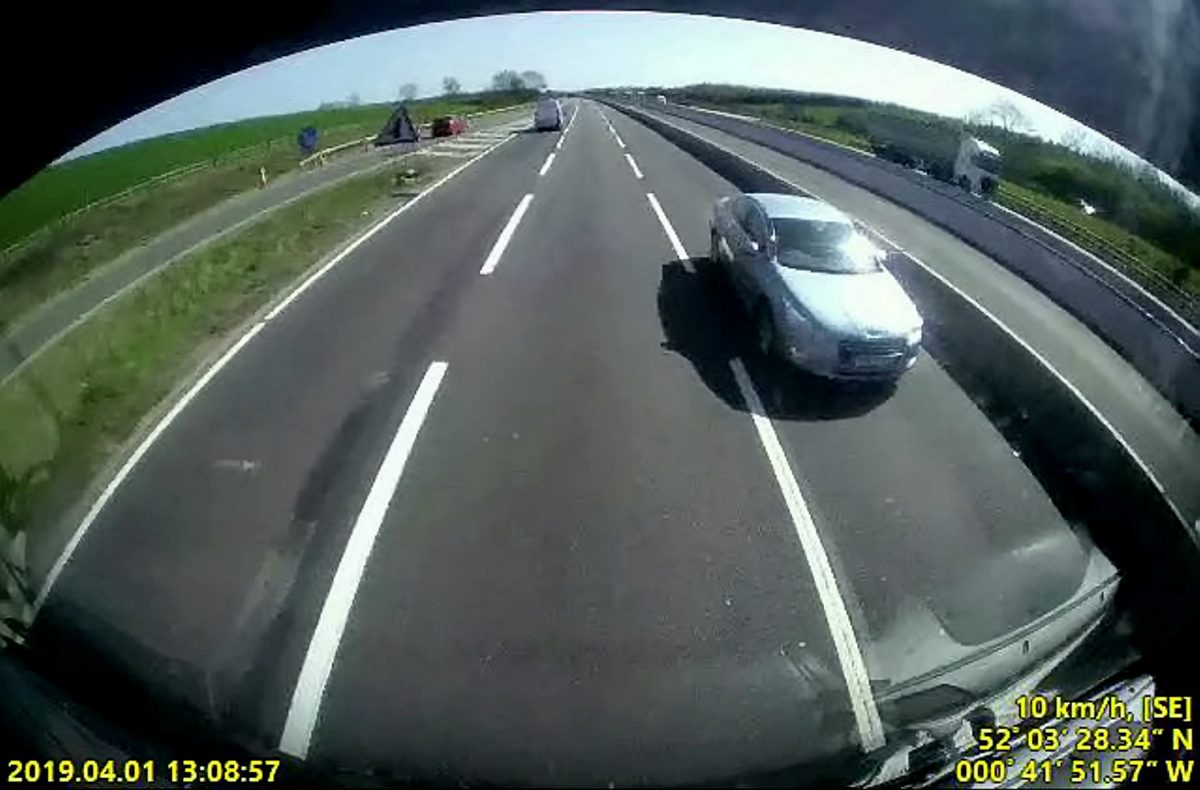 Shocking footage shows a driver risking lives by going the wrong way on the M1 – before trying to correct his error by reversing up the fast lane.

The elderly motorist turned right and crossed three lanes of the busy motorway before driving towards oncoming traffic.

When the male driver realised his mistake he tried to reverse back along the fast lane before pulling forward again.

The driver eventually manages to reverse back up the road before driving the wrong way down the sliproad.

The video shows the hapless motorist join the southbound carriageway of the M1 at Milton Keynes, Bucks., at 1pm on Monday (1/4).

Lorry driver Mark Thomas, 54, captured the terrifying moment on his dashcam as he drove from Tilbury Docks in Essex.

The divorced dad-of-one, of Shrewsbury, Shrops., said: “I was really shaken up by it, he could have killed someone, I couldn’t believe it.

“I was driving in the middle lane and noticed in the distance was not quite right.

“I was doing around 60mph when I saw the car coming up on the fast lane, and slowed down to 40mph in an instant.

“I just slowed right down and put on the hazard warning lights.

“I could see a young bloke in the white van next to me brake hard and he was really straining on the seatbelt.

“The man in the silver car looked like he was 65 to 70 and was very confused.

“When he was reversing on the fast lane I was shouting out the window at him to turn around, in fact I went hoarse from shouting.

“He tried reversing back down the carriageway a couple of times until he weaved his way back down the fast lane and goes the wrong way down the slip road.

“It was lucky it was a clear day because if it had been foggy that would have been it. The road was busy with cars and lorries like mine and he could have caused carnange.

“I have been a trucker for 32 years and this is the first time I’ve seen anything like this.

“I sent the dashcam to the police and they say someone has already reported it, I don’t know what’s happened to the driver.”